After enjoying a lazy day after the trek, we went to town and splashed out on some Italian food in the evening at Pum Pui. Garlic bread to start was followed by a basket of complementary bread, a massive pizza for me, and a huge bowl of pasta for Gilly, washed down with a half-litre carafe of white wine, all for 16 quid. We felt like splurging on some western food; I love Thai food to bits, but there's only so many stir fries and curries you can eat without craving something a bit more homely.

Yesterday we decided to be a bit more active and walked the best part of 5km to the Chiang Mai University Art Museum in the baking heat. We were almost wilting when we arrived, with the mercury close to 32 C. The art was a little all over the shop, and not really our thing (it was a gallery of exhibits made from recycled / raw materials - noble, but a bit bland). It killed a couple of hours though. On the way back we found an excellent little art cafe called Minimal which had some superb photos in, and made the trip that little bit more worthwhile. After stopping off for a customary Cornetto lunch (ice cream lunches are the best) we headed back to the guesthouse to hit the pool and cool off. Typically, the minute my toes touched the water, the clouds gathered and the temperature dropped about 5 degrees. I can't get a break. We said goodbye to the two Pauls and two Toms who were heading out to Laos on a 16 hour minibus drive - something we'll be avoiding, methinks - and then went over to Hayley's guesthouse (Kavil) for some food.

A couple of the ladies that run the guesthouse were heading out for a Halloween party, and invited us to join them. They cracked open a bottle of Johnnie Walker Red Label and were liberally sharing it around. When I say liberally, I mean that by the time we left the guesthouse, there was only half a bottle left. The owner was a lady called Eve, and she was joined by a younger girl named Benny. They were both completely nuts, and had a fantastic sense of humour. We also saw Max - Eve's younger brother - who was painting a mural in one of the back rooms, which looked stunning. The food at Kavil is great; we shared a plate of chicken with cashew nuts, a penang curry, and a pad thai between 3 of us, with a plate of spring rolls to finish, all cooked from scratch. To say we were stuffed would be an understatement.

We weren't planning on doing much that evening, but have taken the attitude of trying to say "yes" to any invitations we get, in order to broaden our experiences and meet new people. So after food, we waddled out towards the Halloween party which was a good 3km away, whilst Eve cajoled a group of German guys en route to join us. Fortunately, the rest of the Johnnie Walker had made its way into some plastic bottles mixed with water to ensure we didn't get thirsty on the way(!). I love whisky, but generally only when it's neat or - at a push - on the rocks. So this watered down stuff tasted pretty bad, but it's probably for the best as I wanted to have my wits about me in case the club was dodgy. There was nothing to worry about as it turned out, and we were treated to a club full of the most amazing costumes we'd ever seen. The creativity that went into some of these was insane.

Unfortunately the music was dire (I believe it was "techno" but to me it was just a very loud, bassy beat/noise) and it meant that we only stayed for an hour or so before grabbing a tuk-tuk ride/crazy death-trap adventure back to the guesthouse. Tomorrow we will be taking it easy in the daytime before heading to a lantern festival in the evening.

Below are a selection of the best pics from the evening: 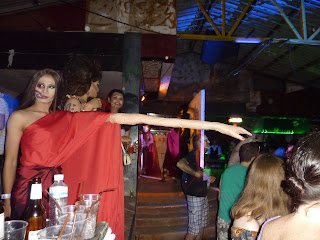 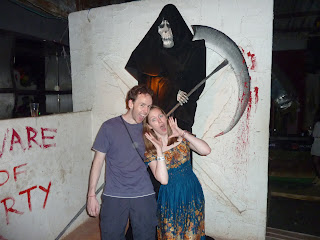 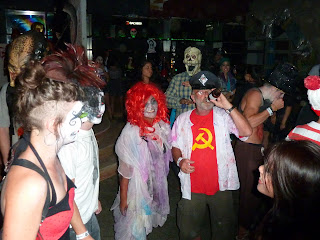