The bus pulled into Cusco at 6am, after a surprisingly uncomfortable night. Cruz del Sur's buses don't offer full cama, which meant we were in the 160-degree position for the duration. The food was pretty awful too; I'm not sure their inflated prices are justified, but at least our bags made it safely. Since it was early, we got a tea at the terminal before getting a taxi to Cusco's centre. I'd earmarked Jack's Cafe as a place to fill up on breakfast, but a misunderstanding by the taxi driver saw him try to drop us off somewhere he thought was good instead. Thanks to the school run traffic, we eventually arrived at our planned eatery at just after 8, with the tariff increased by 50% through no fault of our own. Still, the enormous stack of pancakes with mango cream made the hassle worth it, and Gilly wolfed down a full English like no-one's business.

It was time to find a hostel, since I'd read there was plenty of choice if we strolled around. I left Gilly with the bags whilst I did some recon in the San Blas area. It's outside of the main centre so the options are cheaper and there's far less traffic noise. After wandering around five or six which had prices ranging from £15 to £150 a night, I finally settled for Hostal El Arcano tucked away at the end of a no-through road. Twelve quid got us a double with spare bed, a private bathroom and lightning fast Wi-Fi (at least in comparison to Bolivia).

After settling in, we took a walk around the centre. The weather was grey and threatening rain but it didn't detract from Cusco's sublime architecture, and after picking up a couple of pastries, we joined Free Tours By Foot in one of the squares. This was a new outfit run by three brothers, and Richard was the one taking us around that day. Aside from his propensity to say "actually" at the end of almost every sentence, it was an enjoyable three hours. We took in San Pedro market, an old Incan palace, an alley where The Motorcycle Diaries was filmed, and a shop where we got to compare the difference between pure alpaca wool and wool blended with cotton. There are a LOT of shops in the city trying to pass off cotton as alpaca wool and chancing their arm with prices to match. Our already overloaded backpacks meant that we weren't in the market for any clothing, but it was good to feel the difference; some of the cotton blends are very convincing. The Incan stone which can be found in the base of many of the buildings is identifiable by the lack of cement or other material to bind the blocks. They are a work of art, slotting together on top of each other. In the alley mentioned above, you can see a comparison of Incan stone and more modern building blocks side-by-side. That the Incan blocks weigh hundreds of tonnes simply adds to their impressiveness. We ended the tour in a restaurant with a free pisco sour. Compared to their Chilean counterparts, the Peru version of the drink is frothier and doesn't have the same bite, but it's refreshing nonetheless. 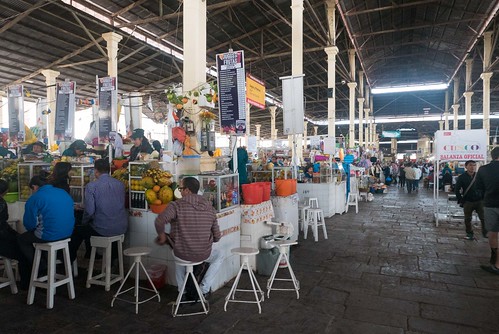 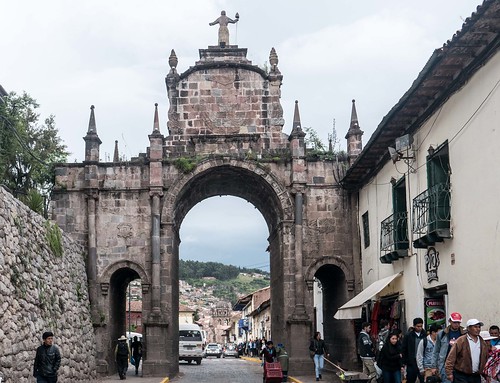 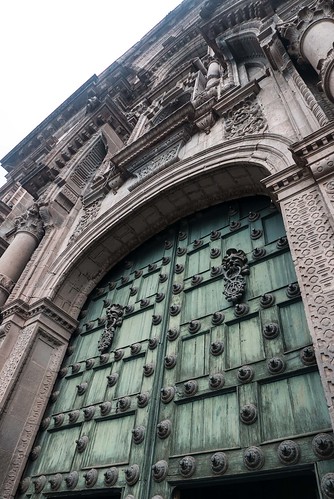 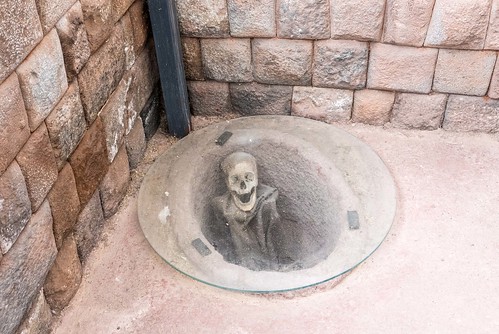 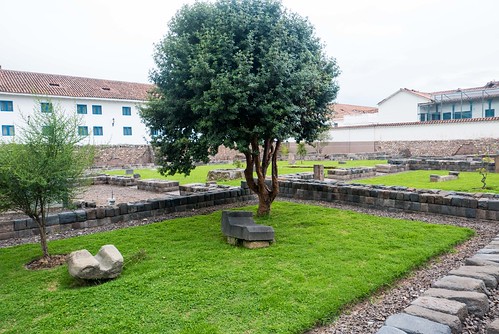 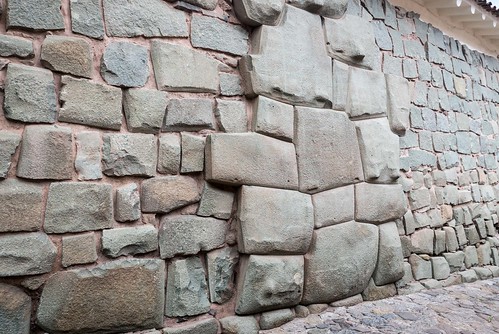 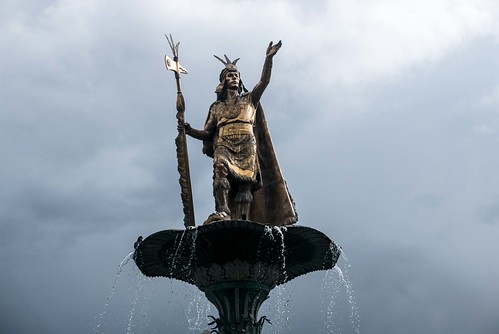 On the way up to Loki Hostel to check out their in-house agency, we ran into Ash and Rhys who were also looking for treks. Backpackers really do keep running into each other! We arranged to meet up later as we were going shopping. Our waterproof jackets had finally waved a white flag and mine was basically being held together with duct tape, so we decided to get replacements. Cusco is the place to find knock-off outdoor gear, with surprisingly high quality materials made in Vietnam (where most of North Face's gear comes from anyway), and after wandering the streets for a couple of hours and with a bit of haggling, we came away with two genuine North Fake waterproof jackets for less than twenty quid apiece. Combined with a chance find of some flip-flops to replace the ones I bought in Singapore in 2012 (also held together by duct tape), it was a successful shopping outing. After a stop at a supermarket we decided to make pasta for dinner in the hostel's tiny, tiny kitchen, which was shared with the family who owned the place. A couple of TV shows and a glass of wine were followed by drinks with Rhys and Ash at a local bar where the 2-for-1 cocktails turned out to be weaker than the prices. Another bar with a pool table and more weak drinks followed before we went to The Craft, a molecular cocktail bar where the barman took his job very seriously, and we were able to actually get a pisco sour with actual pisco in it. After a few games of pool and a blast of PES on the in-house PS3, we called it a night. 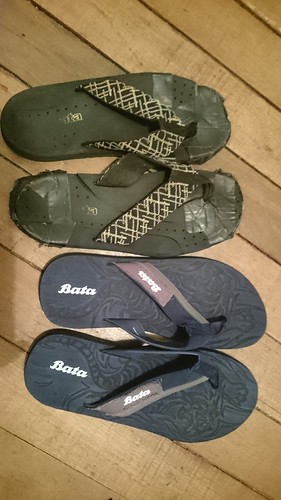 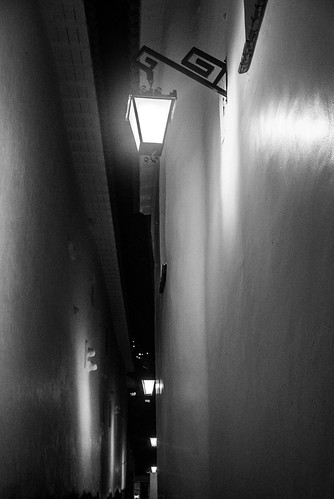 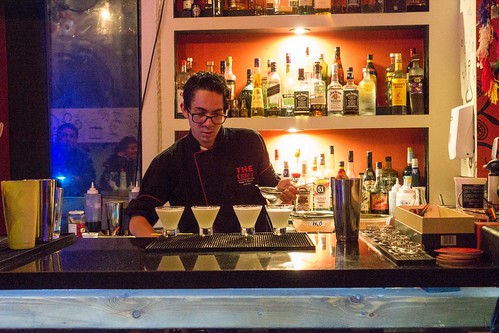 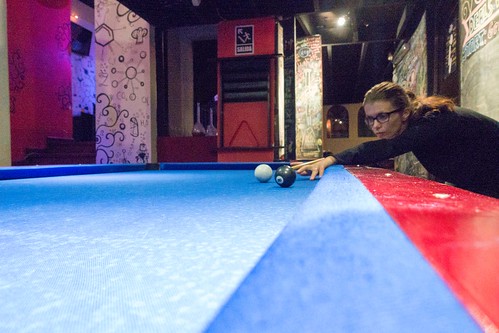 The next day was dedicated to finding a Machu Picchu tour. It may seem easy enough, since every other shop in Cusco seems to be selling them, but we were after one that a) had decent reviews, and b) met our budget. We had decided against doing a full 4- or 5-day trek. Walking is all well and good, but 20-25km a day wasn't really something we fancied on the back of the Colca Canyon trek we'd just done. Instead, we wanted to do a Jungle Trek which almost all of the operators sell and which includes not just trekking but downhill biking, zip-lining and whitewater rafting. A few of the operators I'd researched were closed, some had no availability, and some weren't even at the addresses they were supposed to be. We had booked in a chocolate course at the ChocoMuseo later that afternoon, and had arranged to meet up with Rhys and Ash for food afterwards, so time was pressing. In the end, we went with a company called Aita Peru, mainly because the guy on the front desk was excellent at explaining exactly what was included and what we would be doing for the four days/three nights. It was $225 per person but this included entry to Machu Picchu and the return train journey, which cost around $100 on their own, so it looked like a very reasonable price. I celebrated with some llamas. 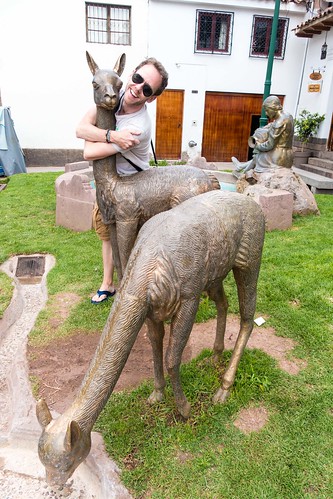 With that out of the way, we were free to concentrate on the chocolate course. This was a fun two hours with a chocolate chef who was hilarious. Her sense of humour was fantastic and she kept a straight face throughout every "fact" she told us, such as the milk in some Mayan hot chocolate coming from guinea pigs(!). We followed the entire process of making chocolate, from picking and roasting the beans before grinding them into cocoa paste, pressing the paste into butter, then refining the mixture into chocolate (dark or light, depending on preference). At each stage, we got to try different drinks made from the process. For instance, when the cocoa beans were roasted, they were then winnowed and the shells boiled into a chocolate-flavoured tea. During the grinding process, there was a competition to get the best paste - it needed to be squidgy and moist; mine was judged to be one of the best, although I shared that honour with four other people. I don't mind: I got a chocolate for winning.

A bit later, we got to try a thicker hot chocolate which the chef told us used to have blood added to it in Incan times. She then proceeded to ask for volunteers to offer a drop of blood to the mixture - a group of rowdy Israelis who had been entertaining throughout had one brave soul put his hand up, and it was only when the chef opened a cupboard and removed a rubber glove and a large needle that the guy decided to back out. Of course it was a joke, but the thoroughness of the ruse was impressive and great fun to watch. We also all had to sing to the jug of hot chocolate in order to infuse it with good vibes. The renditions ranged from Baa Baa Black Sheep to Jingle Bells, to a number of Israeli songs which involved a lot of shouting and jumping around.

At the end of the whole process, I opted for milk chocolate for my batch of chocolates while Gilly went for dark. We had a mould each into which we added the various toppings we wanted. Gilly chose coffee and raisins whilst the big kid in me went for everything that looked like I'd enjoy in a sweet shop, plus some chilli powder for a kick which was added into the final pair of chocs. 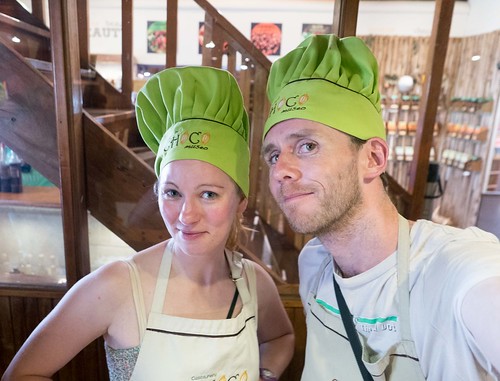 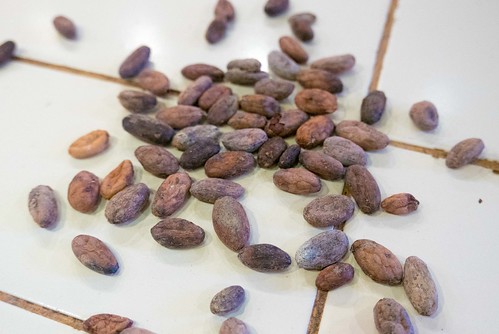 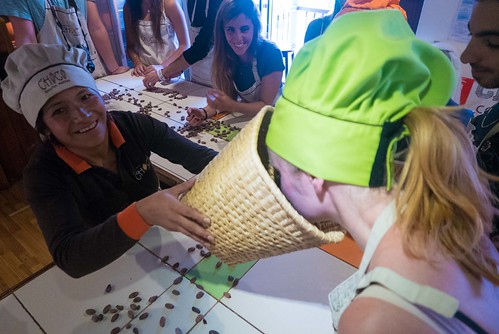 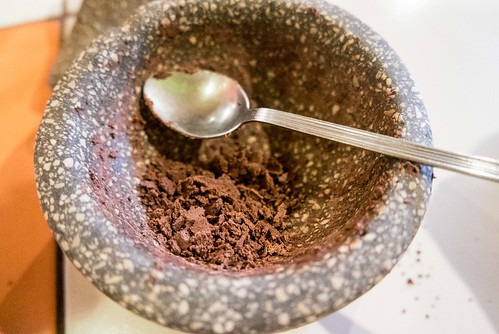 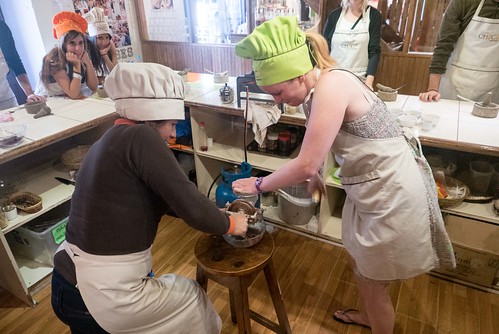 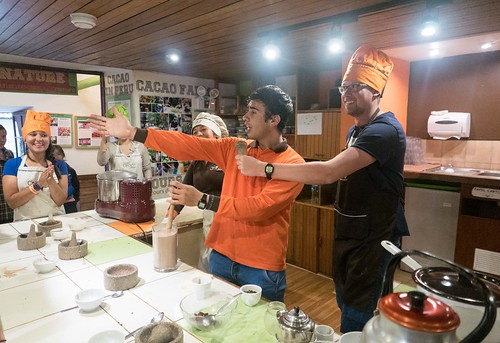 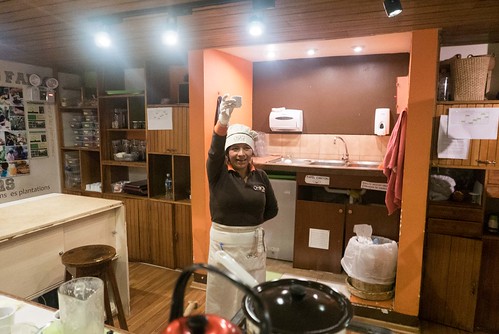 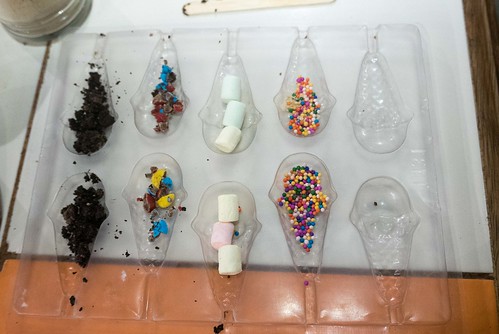 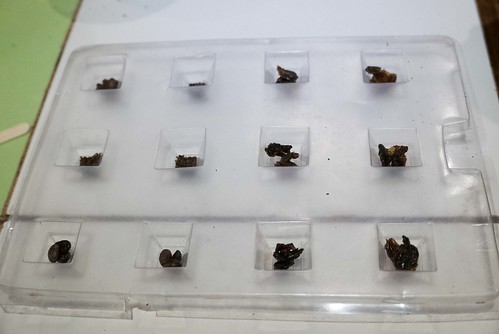 A couple of hours later, the two batches were ready (although mine tasted much better than they looked). Gilly went to pick them up, whilst I collected Rhys and Ash from The Craft - their new favourite home - and we all went out for a meal at Manka, the place where we had ended our walking tour. Their menu del dia was very reasonable, and we had a great meal before heading to Rhys and Ash's AirBnB digs. They were lending us their GoPro for our trek, which was very generous. If I were to plan our trip again, I'd definitely pick one up - they're cracking little cameras, very versatile and also perfect for diving. Something to consider for our next trip! 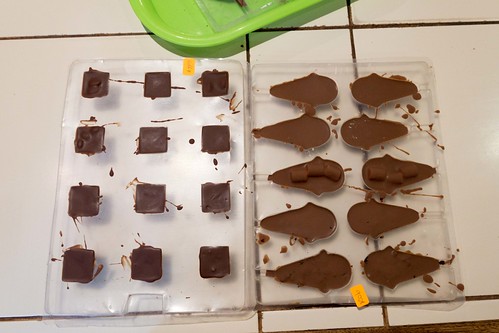 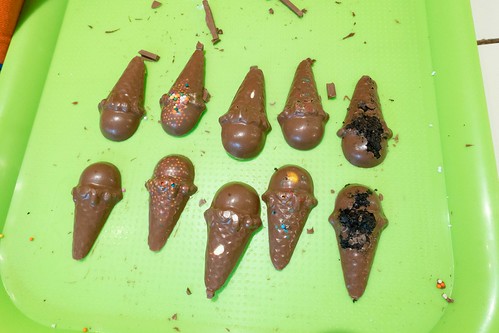 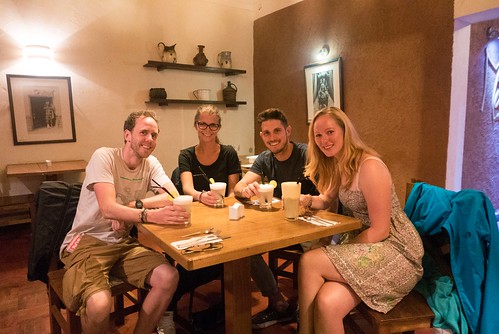 In the meantime, we had a Machu Picchu trek to pack for, so we ditched our big backpacks at El Arcano and loaded up our small ones, hoping that we had enough clothes, gear and chocolates for the next four days.
Posted by Rob Kershaw at 11:11 PM

I loved San Blas, spent a lot of time there! And Jack's was amazing, always a lineup for breakfast :)