We'd travelled overnight to Punto Cormorant on Floreana island, and after a buffet breakfast we took a zodiac over to the island for a walk around. Our guide was Sarah who had been doing the job for 25 years, so knew her stuff. Unfortunately she seemed more interested in maintaining her appearance and keeping up-to-date with her phone than offering any sort of personality to proceedings. We'd arrive at a location towards the back of a group, only to find that she'd started talking as soon as the first person got there. Regardless, the beauty of the place more than eclipsed a mediocre guide. The sand sparkled with the volcanic material that had mixed with it, and pelicans and blue-footed boobies nested on the cliffs we passed by. Blue-footed boobies use their bright feet to dance and attract mates, and have wonderfully expressive faces. We also saw a Galapagos penguin, quite rare for the area. 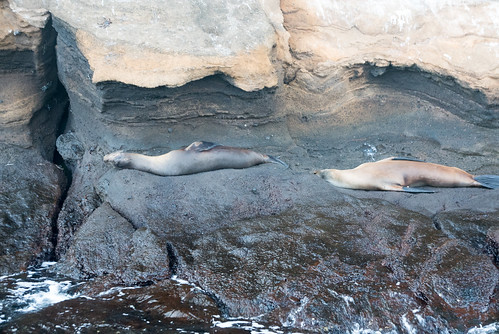 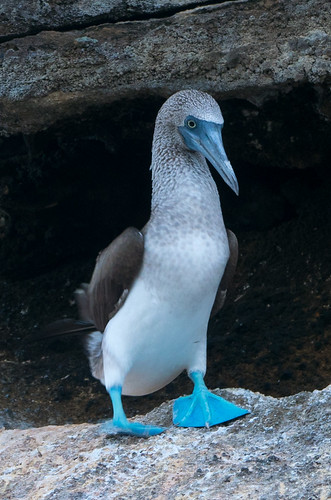 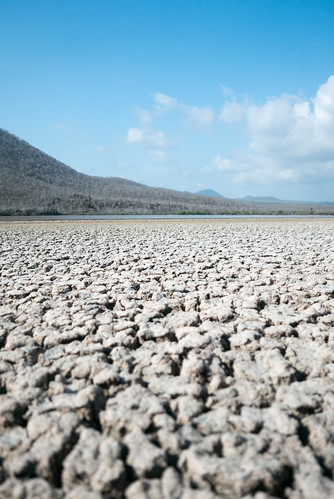 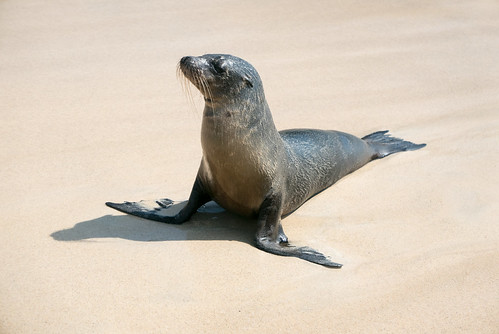 Floreana is home to flamingos, and I never realised that their nests were built like sandcastles because they bend their knees in the opposite direction to us, so can't build nests like normal birds. Education! The shore on the opposite side of the point is home to nesting turtles. These only come out at night to lay eggs, but we saw the tracks they made up to the dunes. If they come across an obstacle such as a log on their way from the sea, they have to return to the water and try and find another path further up the beach to reach the dunes. As such, sometimes they can be still attempting to lay their eggs in the morning, and at that point they risk death from being dried out by the sun. Only one egg in a thousand will survive to hatch. Nature is pretty harsh out here. The juvenile sea lion we saw on the beach might disagree though, as it lay almost prone in the water and let the waves wash it ashore. It was pretty chilled out. After exploring the island, we took the zodiac out to Corona del Diablo (Devil's Crown) for some snorkelling. Yoconda had given us a wetsuit and snorkel gear which was actually in great condition, meaning that our time in the water was really comfortable. Gilly felt a little better too, and we were able to enjoy the crazily varied sea life. These included bumphead parrotfish, (which I can never not call "bumhead fish" after our time in Borneo where I misheard a travel agent...oh, the hilarity), angel fish, surgeon fish, and a group of three spotted eagle rays, one of whom had a stump where its stinger should have been. As fantastic as it was to see this all, it was topped soon after when I swam towards the entrance to the crown and a sea lion decided to join me, swimming past less than two metres away. Absolutely incredible. 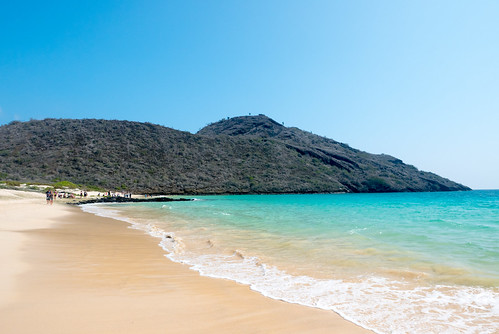 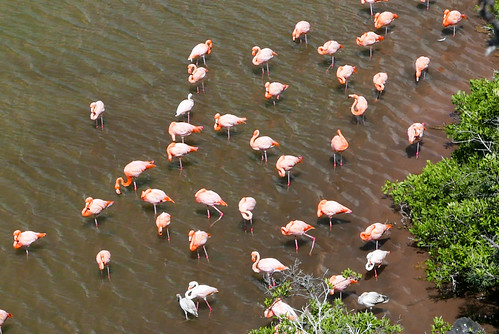 We headed back to the Yolita for a lunch of avocado in thousand island dressing, followed by pork with mustard mash and a fruit salad. The morning, along with a restless night, had been exhausting. So when we decided to have a couple of hours nap after eating, we totally didn't hear the bell summoning us to the zodiac for the afternoon excursion. We got to the back of the boat ten minutes late, and the place had been abandoned by the group. Fortunately a couple of staff were on hand to call a boat back for us and take us to our third point on Floreana: Post Office Bay. Historically, this is where pirates used to leave messages in a barrel, which were picked up by other pirates who were heading in the same direction as the letter's recipient so they could drop it off. These days a variation has been created for tourists - you can leave a bunch of postcards behind, and travellers who live in or around the area of the recipient and who arrive after you can collect them and then go and drop them off when they get back home. It's a whimsical notion which I can totally get behind; Gilly found one for a person in South Ruislip where she went to sixth form college, so we took it with us to deliver on our return. It's highly possible that postcards can remain there for days, weeks, or even months without collection...It's entirely reliant on the visitors' provenance, and is all part of the fun. We left a few behind so it'll be interesting to see when they arrive! 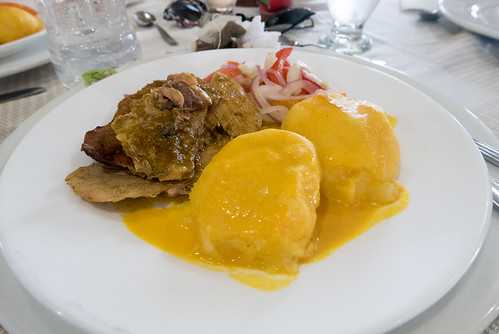 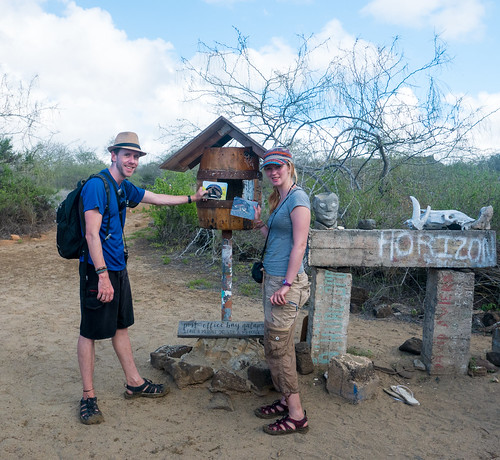 After mailing duties, we took a trip down some lava tunnels. These were formed when the now extinct volcano on the island chucked out a load of lava which carved huge tubes into the rock, before cooling and eventually hardening. The tunnels were unsurprisingly dark and also slippery, thanks to a body of water that you could swim in further down (we didn't, paddling in it was cold enough), but it was big enough inside to fully stand, which makes you wonder exactly how much lava must have poured down there. More snorkelling in the beach followed after we resurfaced from the tunnel, and although the water was murky near the shore, we still managed to briefly see a couple of huge sea turtles swimming in the shallows. Unfortunately, Gilly's seasickness returned once we were back on the boat, and while I was able to happily munch through the tuna, pasta and broccoli and a chocolate mousse dessert, she could barely manage a soup starter. It may have been the anti-nausea tablets which have the potential to cause drowsiness, but she headed to bed and was flat out by the time I got to the room at about 7:30pm. I caught up with some blog and was asleep not long after, hoping that the extended nap would help Gilly feel better in the morning. 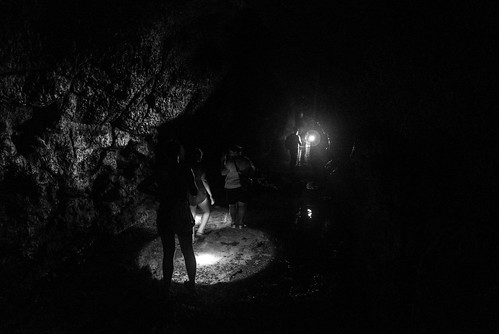 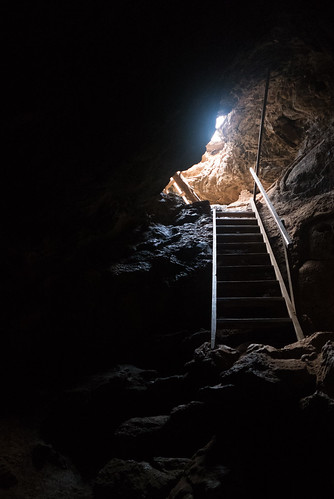 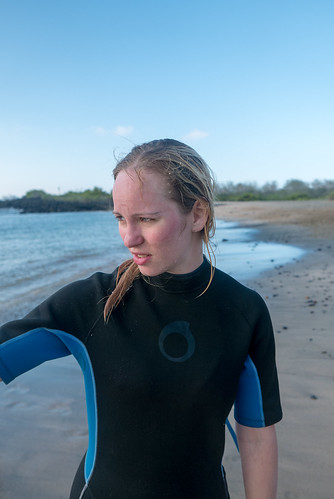 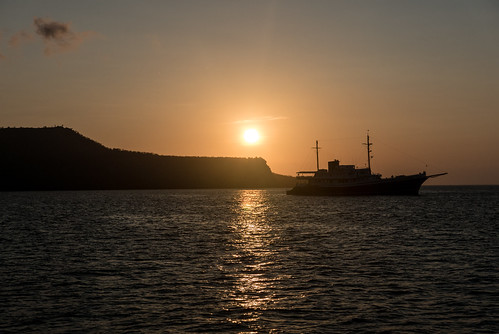 Luck was on our side - an extended rest made a massive difference, and Gilly was in much better shape the following day. Coincidentally, it was our eleven-year anniversary so we were hoping for a memorable day. We'd arrived at Sombrero Chino, so-called because its shape resembled a Chinese hat. The island is separated from Santiago by a channel, and is home to a small sea lion colony (like pretty much all of the islands in the Galapagos), and we saw a mother and calf on the sand almost immediately after disembarking. We saw some small marine iguanas, and followed a path over a solidified lava field. All of the islands on Galapagos are volcanic, but Sarah told us that only Isabela and Fernandina were still active, and there were other "hot spots" which could lead to the activation of smaller volcanoes. To be fair, it wasn't explained particularly well so my explanation could well be completely wrong. The snorkel around Santiago Island which followed was superb. Aside from a multitude of colourful fish, including parrotfish and neon blue juvenile damselfish, I caught a glimpse of something in my peripheral vision and the next thing I knew a penguin was speeding past me, its feet blurring like a propeller. They can swim up to 40km/hr, and it shows. 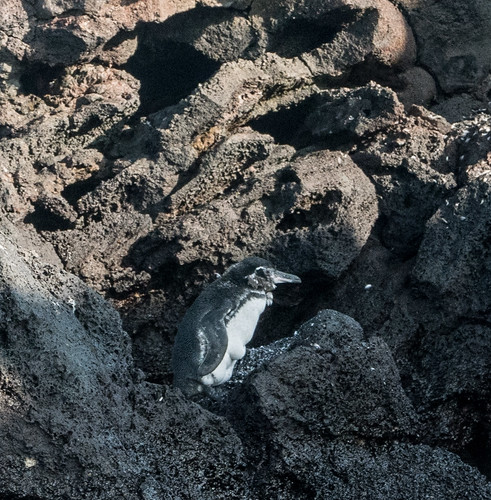 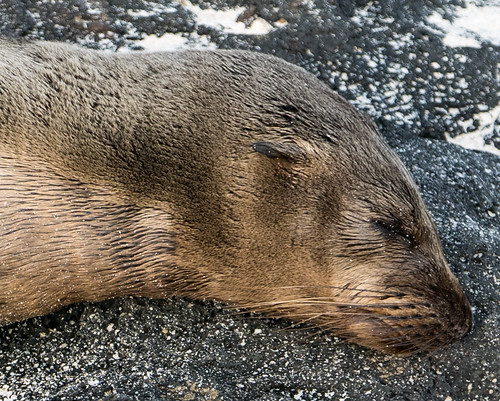 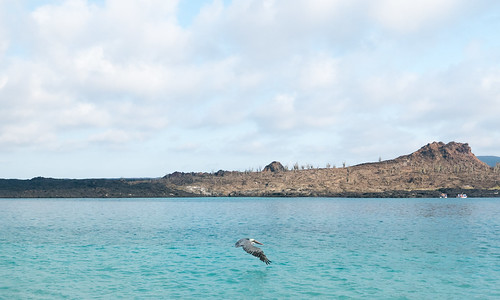 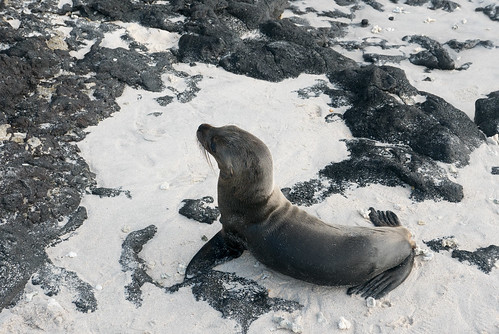 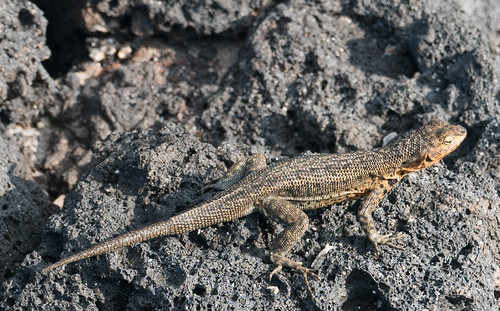 After garlic prawns, rice and veg and a laughable dessert of sliced banana with chocolate sauce on top, we arrived at Dragon Hill after lunch for more snorkelling, which offered up little but a few boxfish and a dive-bombing pelican trying to catch lunch. As the name suggests, there are dragons on the island. Well, OK, iguanas. But they're almost the same thing - the land iguanas are huge beasts with five-fingered claws that look like they're covered in gauntlets. The females test the soil with their tongue to find a place with the right temperature to dig a hole and lay their eggs. It seems to be a successful approach as there were loads dotted around, and some very close to our path. 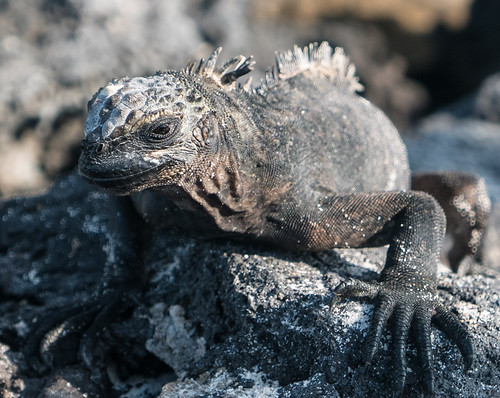 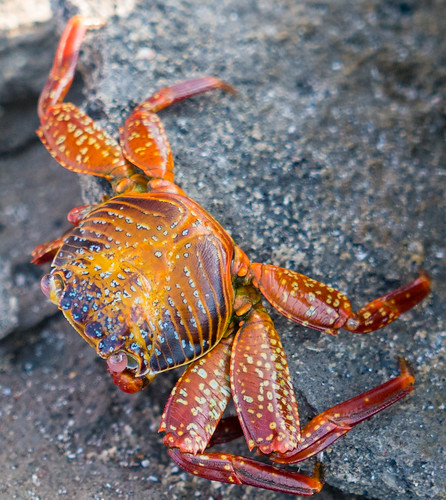 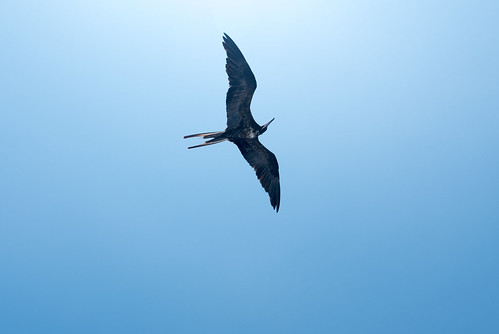 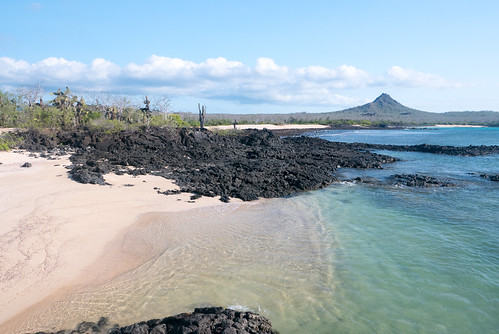 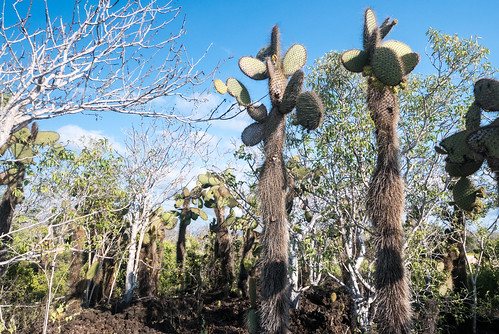 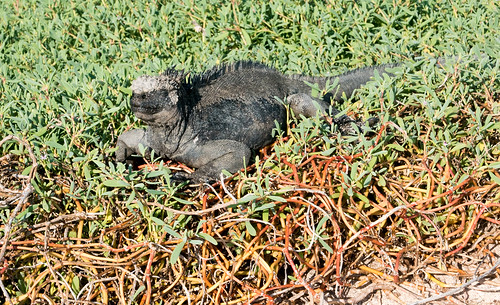 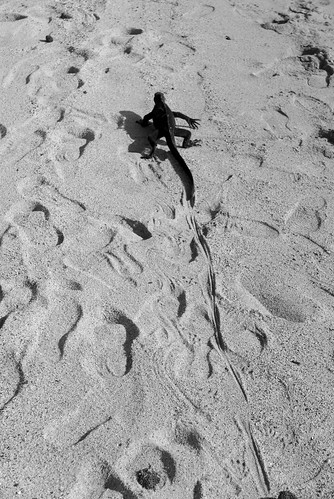 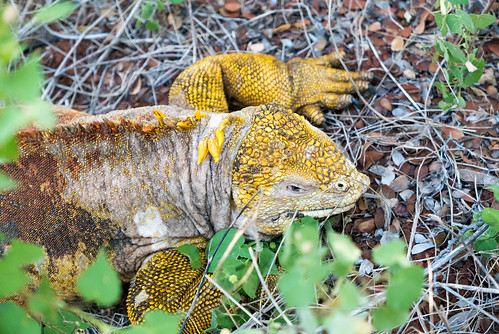 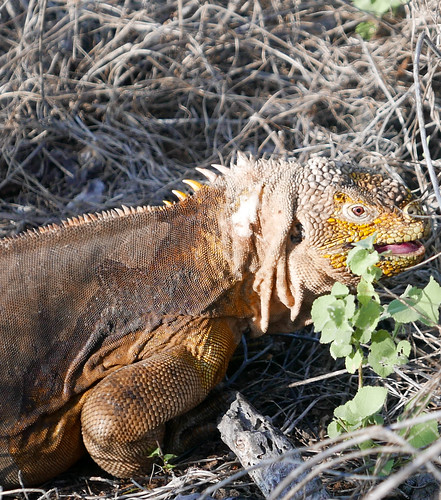 I wished at times that I'd brought a camera with a huge zoom lens to fully capture the creatures, but on balance the weight, bulk, expense and hassle accompanying an SLR and associated lenses would not have been worth it. What would have been great, and what I'd recommend to anyone taking extended travel in future, would be to invest in a GoPro camera. It'll let you take photos and video underwater, it's light, sturdy, and worth the price. If and when we head off on our travels again, it'll be top of my list of equipment. 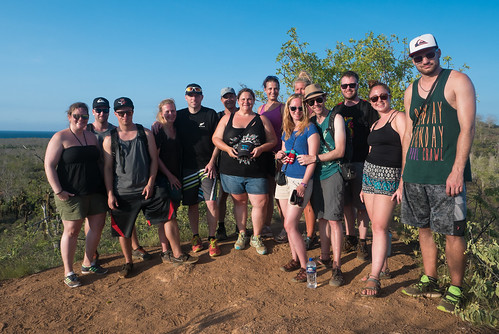 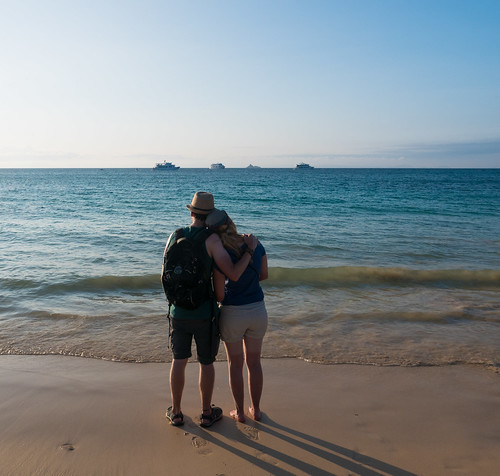 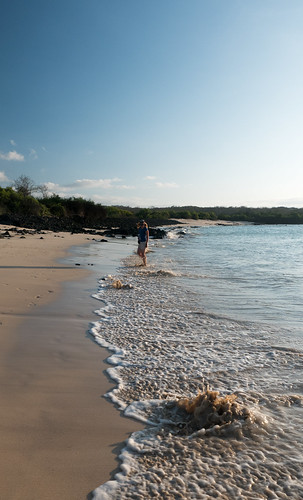 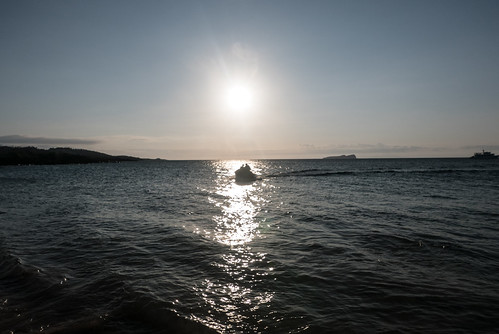 After snapping more iguanas than I could count and taking the obligatory group photo, we were back on board for a meagre dinner of hot beef with cold chips and veg followed by some tinned peaches. Given that the Yolita was sold as a first-class ship, the food had been distinctly average throughout. Thankfully, the islands and the things we'd seen so far didn't make us regret a minute of it. We headed up to the sun deck to watch the stars, before turning in for our final night.
Posted by Rob Kershaw at 12:45 AM