The final destination on our agenda was Mosquera beach, the type of destination that people get wheeled out to in order to make them feel like the last day of the cruise actually had some activity on it. It was just a beach, but the sand was soft and white, and there were three super cute sea lion cubs who were playing with sticks like dogs. We watched the sun head upwards, before going back to the Guantanamera. 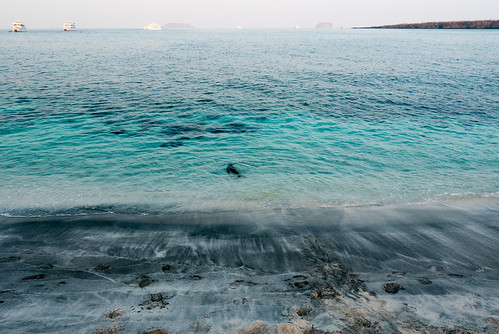 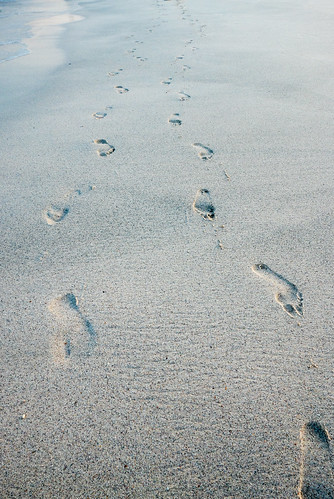 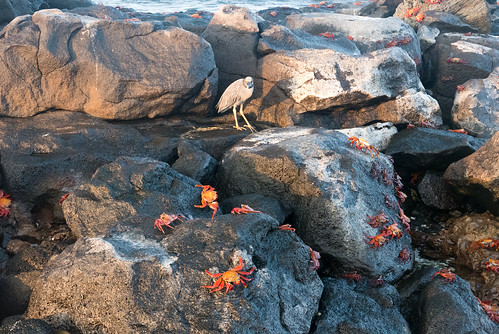 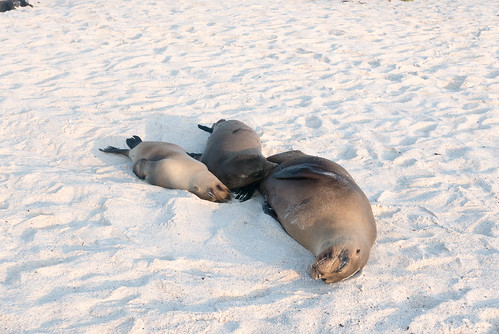 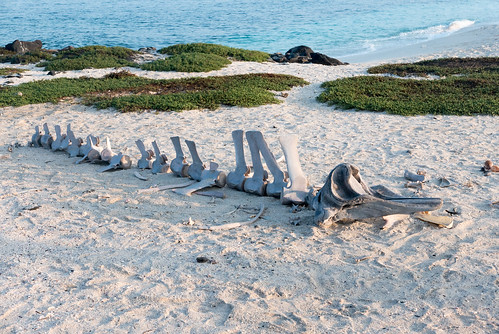 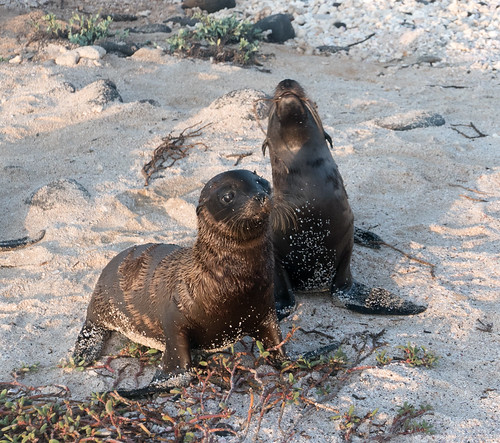 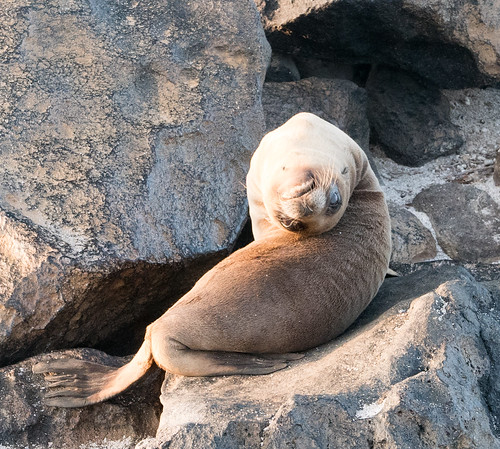 Our last breakfast was scrambled eggs and bacon (result!), and before long we were back at the airport again and saying farewell to the rest of the passengers who were flying out, and to Johan who had been a fantastic guide for the entire trip. 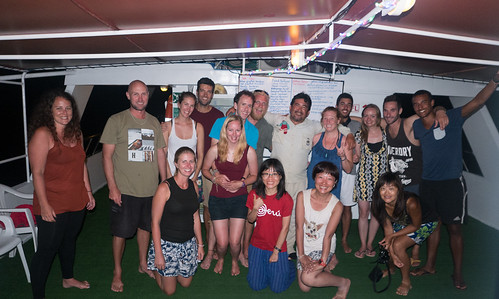 In a sad addendum to this story, in October 2016, the Guantanamera suffered an explosion which completely destroyed it, and also killed one of the engineers - Julio. There is very little information about the events that caused it, but our hearts go out to Julio's family and the staff on board the ship.

We caught a taxi back to Puerto Ayora with Sophie and Steve after an amusing stand-off between a policeman, our driver and the ones he'd undercut to get our business. Apparently they weren't happy with him accepting $2 per person to take us to town - admittedly, this was really cheap in comparison to the $4.50 per person they normally charge - but after some heated words, the policeman confirmed we'd only pay the lower price and we were soon back outside Mockingbird agency.

We handed back our wetsuits, withdrew as much cash as we were able, paid off some to Staling, and then set about trying to find a hostel. We ended up at Hotel Salinas which had awful Wi-Fi, a fan in the room rather than air-con, and no hot water. It seems all the good value accommodation had been taken, and we weren't feeling in the mood to pay $60 a night when we didn't know how long we were staying, so we settled for the best we could find.

We stuffed ourselves silly with lunch at Pizza.Eat, and after scurrying around on a Sunday where almost everything was closed, we then hopped from dive shop to dive shop to try and get a trip to North Seymour for the following day. Operators were either booked out or not going until later in the week (there's a limit on the number of boats that can go to a specific site each day, just like the cruises). We went back to Yoconda from the place we booked the Yolita, and she pointed us to Albatros Divers which seemed to get good reviews - discounting the diver who died in 2012, of course... (it turned out this was a heart attack rather than an issue with the dive itself). After talking to the shop staff and guides and checking the equipment they seemed competent enough, so we booked two dives for the next day.

We found out that Rhys and Ashleigh had arrived in town too, so we arranged to meet them the following day for drinks. Ash's phone had been stolen from her hand in Quito by two guys on a motorcycle, which was awful. We'd been pretty lucky aside from the Sao Paulo pickpocketing, but it reinforced the need to be super vigilant. With 9 weeks left, we really hoped we'd get through the rest of the trip without incident. Happy hour caipirinhas were followed by a huge plate of special fried rice at a local shack, which saw us bloated and waddling back to our room before 10pm, in preparation for yet another early start.

We checked out at 6:40 and found that our clothes hadn't been washed. The launderette three doors down was now open, and the hotel was clearly going to just drop our stuff off there and take a commission for the privilege, so I picked it up myself and took it down, much to the bemusement of the owner on the hotel desk. We left our bags at Albatros, jumped in a pick-up (the town is flooded with brand new Toyotas, mostly used for taxi purposes), and before long we were at the dock and on board a shaky boat with nine other divers of varying ability.

With over forty dives under our belt, we were put in the more experienced group with divemaster Ronnie and three other English people for an all-British ocean adventure. The first dive was North Seymour, and though we hadn't dived since October 2014 in Malta, we acclimatised very quickly. I love being underwater as the wildlife is so varied, and you can get a much closer look at it compared to snorkelling. We saw a few white tip reef sharks before coming across an entire ocean bed of what looked like reeds. When we got close though, they rescinded into the sandy floor. After closer inspection, it turned out that they were actually eels! More specifically, Galapagos Garden Eels, endemic to the islands. You could see their grumpy faces starting out of the holes if you swam close enough.

Ronnie also pointed out another grumpy eel among the rocks, this time a moray. We saw a spotted eagle ray flapping by at a distance too, but our primary focus was looking for hammerhead sharks. Unfortunately even after fifty minutes underwater there were none to be seen. We came back on board for a break and some snacks before heading to Mosquera, near the beach we ended our last cruise activity on. This was much more interesting dive, with a lot more to see. From the school of barracuda overhead to the close-up encounters with stingrays and eagle rays, as well as a lazy turtle sat on the ocean bed amongst some rocks, photo opportunities were plentiful. It didn't look like we'd have much more luck on the hammerhead front, until Ronnie spotted one overhead which all of us struggled to see. Ten minutes later, one came into view much nearer to the group and though the visibility was pretty crap at 12m, we were still able to get a good look at it.

Sadly, the excitement must have caused me to burn through my air far too quickly and I had to ascend along with two of the others, leaving Gilly to spend the last ten minutes looking for more sharks on her own. She saw one more, but apparently there were also three hanging around in a group which she thought were reef sharks. But our objective was complete: we'd finally got a good look at some hammerheads. Pretty weird things they are too. The temperature throughout was around 26 degrees, but it dipped to 19 a couple of times when we hit a cold current. Thankfully we were wearing full wetsuits so I didn't end up leaving the dive as a shivering mess.

Back on land, and after a paltry included lunch, we had a few objectives. First was to make sure Staling had both of our passports (he did). Second was to secure some accommodation, and after both of the places we'd earmarked the previous day proved to be full, we got lucky at Hotel Sir Francis Drake with a huge double room, hot water and actual working Wi-Fi for only five bucks more than the previous day. With that sorted, our last job was to see if we could bring our flights forward. We were originally due to leave four days later, but since we had seen and done pretty much everything we wanted to, we decided to move to the mainland to save time and money. For $10 per ticket at the LAN office, we were able to move the flights to 1:45pm the following day which was far less than we expected.

With everything sorted, we met up with Rhys, Ash and Wally (Ash's dad) at Café Hernan for a drink before dinner. It was great to see them again, and we caught up with everything they had been up to since Cusco. Like us, they struggled with Machu Picchu mountain, but unlike us they'd had four days of solid hiking beforehand on a Salkantay trek so were in an even worse state by the end of that day. They'd also done another trip to the Amazon from Ecuador which they much preferred over the one we did in Bolivia, not least because there was more wildlife and far fewer mosquitoes. We all needed to eat, and their Galapagos package included food too, so we agreed to try and meet up again at some point in Colombia if not before. 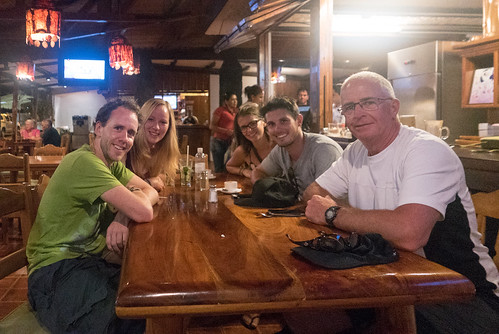 Meantime, we paid off the rest of the cruise to Staling (who must be making an absolute fortune, which is probably why he seemed drunk most of the time) then went back to Charles Binford street to work our way through an entire grouper and a couple of beers. The fish looked cute beforehand, but tasted even better. 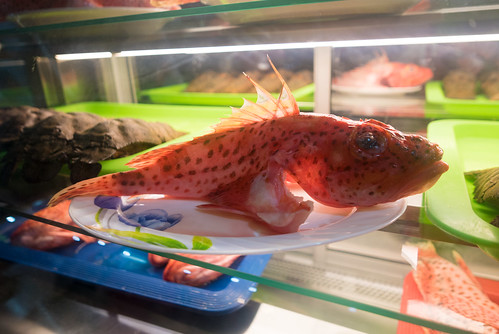 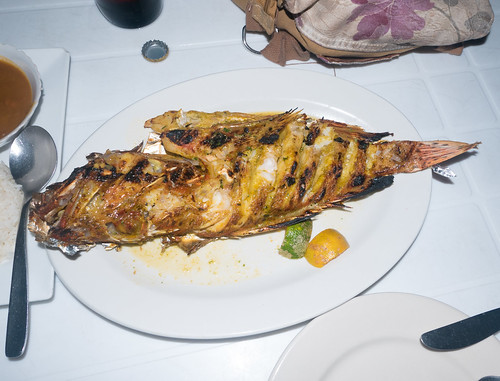 After wolfing it down, we headed back to our new digs for a far more comfortable night's sleep.
Posted by Rob Kershaw at 4:27 PM

Thanks for taking the time to share this article here about the galapagos islands adventure vacations. Your article is very interesting and I like to read it. Keep sharing this type of articles here.