The sleeper bus from Hanoi to Hué was the first we'd taken on our trip. It wasn't an unmitigated disaster, as we managed to get something like 5-6 hours sleep. It involved lying down on an adjustable seat stacked in three columns one behind the other and slanted so that your knees down were underneath the headrest of the seat in front. Ingenious, but not particularly good for moving around. Essentially, you are in a lying down position for over half a day, unless you wanted to bring your knees up to your chest. On top of this, the chairs are arranged bunkbed-style so there is an upper and lower row, and in true Vietnamese style the two aisles were filled with sacks of rice, live birds and for at least part of the journey, Vietnamese people. 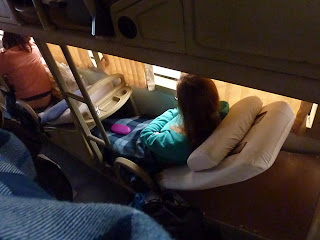 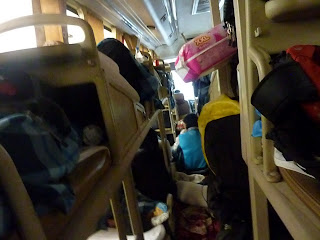 At 6am though, a little brat of a girl decked out in denim, gold bracelet, gold necklace and gold earrings who couldn't have been older than 3 decided to scream every 15 seconds. A piercing, persistent shriek that served to wake up anyone unfortunate enough not to have bought earplugs. I'd wager that they'd have disintegrated even if they had, such was the sonic force generated by this spoiled shit. Her step-father was an English guy wearing similar attire to the kid, her mother was Vietnamese, and it was clear that neither of them had the ability to shut them up. An hour of this later, and I had concocted several ingenious methods of doing so myself, the best of which involved the child, a pane of glass and significant velocity.

We arrived, cranky and hating children even more than usual, 15 hours after setting off. It was raining. We hadn't experienced rain over any significant time period for at least a month. Hué soon made up for that; it rained consistently for the first two days, rained intermittently for the third day, and typically dried up on the morning of the fourth day when we got on a bus to Hoi An.

Hué itself, then. I imagine it's quite a quaint little city when you can walk around it without feeling cold and wet, but even with the drab weather we tried to make the most of it. On arrival we were taken by a free minibus to a hotel I had earmarked for potential by a guy who told us we'd be staying a luxury room with breakfast chucked in for $10. The photos looked stunning, and there was no obligation. Just as well really, as the room was $12, breakfast wasn't included, and the room looked nothing like the picture. The chap with the leaflet had obviously scarpered after dropping us off. We politely declined and walked across the road to Ngoc Binh Hotel where we were given a comfortable room for $8 (no breakfast, but that was fine).l When I say comfortable, I mean it was the softest mattress I have ever sat on. I imagine that if they'd made a bed out of marshmallow, this is what it would feel like. Bags dumped, we walked over to the Family House Restaurant opposite and had a hearty lunch (an excellent spicy fish casserole thing that is just the right side of "blow-your-head-off" hot) before setting off to find the main cultural hotspots. A Contemporary Art gallery we came across consisted of a house containing a number of vaguely-formed sculptures and little else. Across the road, we spent an hour or so at Ho Chi Minh Museum (apparently every city has one), and soon found ourselves faced with many of the same photos and excerpts from his speeches as in Hanoi. I have vowed not to go in another one until Ho Chi Minh city...if anywhere is going to enlighten us on this fellow, it's surely the city that's got his name. Right?

In the evening we went to Nina's Cafe, also on our street about 4 doors down. Somehow we'd managed to get a hotel in the road with the best restaurants in town, all serving up authentic local specialities. We tried Bang Khoai - a yellow pancake made from egg and rice flour, containing shrimp and pork - and some delicious pork which was wrapped around a spring onion for cooking, and then served with beansprouts, lettuce, cucumber and an amazing peanut sauce which you then roll up into pancakes using supplied rice papers. All of the food was fantastic.

The next day we checked out of Ngoc Binh in favour or Thai Binh 1 next door (the wi-fi in the former was playing up and we needed to get some photos uploaded) and braved the relentless drizzle and biting wind to head into the citadel and Imperial City. The citadel is the "old" city, whilst the Imperial City is a collection of buildings - a lot of them ruins - from the time of emperors in the early 19th to 20th centuries. It contains things like a theatre, palace, pavilions and ornate gates, and would make a lovely walk on a warm sunny day. We were not there on a warm sunny day. 4 hours later, dripping wet and freezing cold (where did the cold come from? I didn't order this on our trip until New Zealand!) we'd explored about as much as we wanted to, and were now ready to go back to our lovely hotel room. After getting dry, we went back to Nina's Cafe for an evening meal and saw a Geordie couple who had racked up 20 empty bottles of Huda Beer between them for the paltry sum of 200,000 dong (£6.60). That would barely get two pints in Bristol. The food was once again superb - we had more of the pork from the previous night and some speciality shrimp and fish spring rolls, then retired to the hotel.

On our last day in Hué, we decided to charter a motorbike taxi for the day. The Geordies had told us not to bother getting a tour - all of them took a dragon boat along the brown, murky Perfume river, with various stops at shops where the locals aggressively hawked their wares. With the weather as it was, we went for the "fun" option of getting on the back of a moped whilst a guy called Lop who didn't speak a word of English buzzed us about the various mausoleums in the area. This was my first time on a motorcycle, and despite my previous misgivings, it wasn't bad at all. Mopeds look fairly simple to ride, especially the automatics. We wandered around the three main mausoleums the tours spin you to but with the bonus of a) not being crowded with tourists getting in our shots and b) being able to take our time rather than the 15-minute whistle-stop visits you usually get. Despite our gesticulations, we ended up with one helmet between us which I gave to Gilly. I figured we'd be going slow enough with three people on a moped for it not to be too dangerous if I fell off.

We'd experienced the near misses from a distance in Hanoi. Actually being part of the "fun" and almost getting broadsided by bikes, cars and trucks whilst actually on a bike is completely different. Firstly, you have to have confidence in your driver. I did, completely. The guy was 60+, so had obviously been doing this for a while. Secondly, it helps not to stick out any extraneous body parts. On a number of occasions, Lop's tarpaulin raincover actually hit the moped handle of another driver coming in the opposite way. This is how it goes on a moped in Vietnam. People swerve all over, come close to hitting you, and at the last second turn away. After the third time of it happening, I became a bit blasé about it. It was just another ordinary "oh-my-God-we're-going-to-crash-oh-wait-we've-somehow-survived" scenario.

So we trundled around the entire day, hopping on and off at a total of three mausoleums and a pagoda. Lop had to ask for directions on a number of occasions to find these places. It was pretty obvious that when he'd yelled "motorbike!" at us, he wasn't expecting us to present him with an itinerary, and so proceeded to blag his way (via a helpful interpreter friend) from then on. The mausoleums are the "afterlife palaces" of the old Vietnamese emperors, and are sprawling complexes of buildings and grounds, littered with statues, ponds, temples, and so on. The three we went to were Minh Mang, Khai Dinh and Tu Duc. Khai Dinh was probably the most impressive, and had exceptional mosaic work in the walls inside, as well as a grandiose series of steps and platforms to climb to reach the main temple. 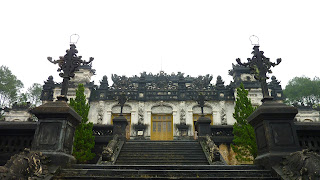 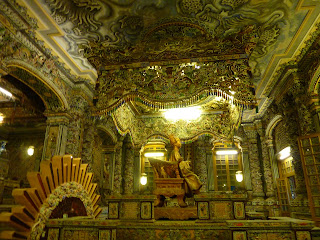 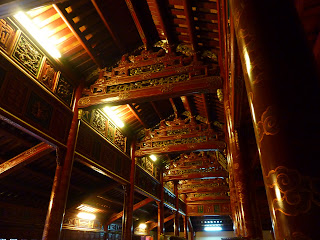 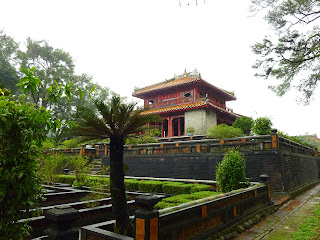 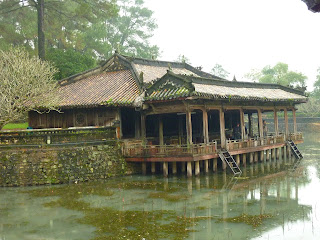 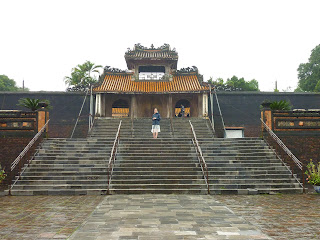 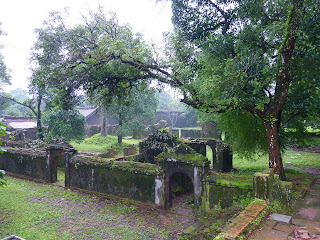 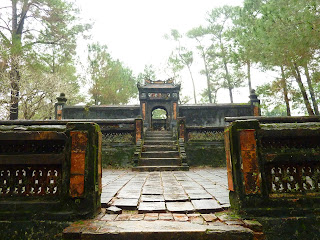 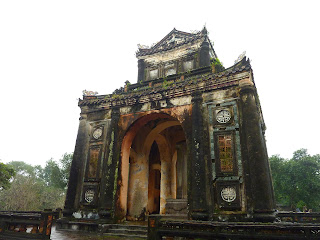 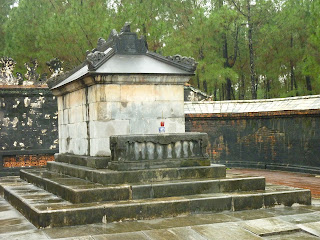 The other two were interesting as well, but not in such good condition.  Thien Mu Pagoda was last on the agenda, and was a working temple complete with chanting Buddhist monks, a Bonsai garden and, in a garage, the Austin car driven by the venerable monk who drove to the centre of Saigon and set himself on fire in protest at Catholic oppression of his faith. Sobering stuff. 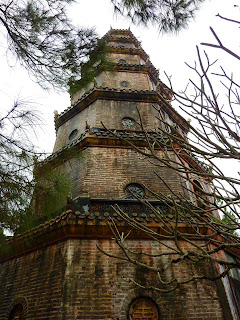 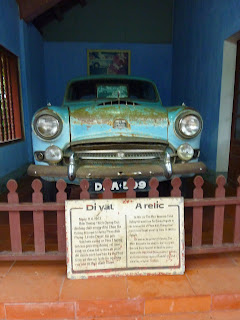 Thankfully the weather in the afternoon diminished to cold, rather than cold and wet. We arrived back at our hotel at about 4:30pm, then went for dinner with Scott and Hannah - two Australians we took the Ha Long Bay tour with. We fancied something a bit more western, so ate at Omar Khayyam's Indian Restaurant which was possibly the best Indian meal we've had since leaving the UK. Still not a patch on home, but a damn good effort nonetheless.

We had explored Hué as much as we wanted to given the miserable weather, and were happy to head on south, so we booked a bus via the Family House Restaurant for the next morning to our third Vietnam destination - Hoi An.
Posted by Rob at 3:57 PM

I find a great way to deal with screaming children is to locate their parents, then repeatedly scream at them like a caged parrot. Do it enough times and they will eventually get the message.