We set off at about 8:30am, with our luggage strapped to the back of a couple of bigger bikes, which were also more comfortable to ride on. Just as well, since I was using muscles I forgot I had since my karate days and they were none too happy about being asked to work again yesterday, particularly Mr. Hip Flexor. We were ready to go! 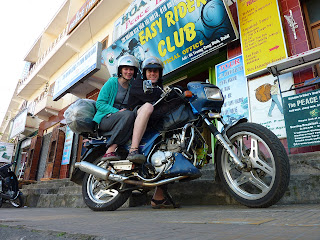 Our first stop was Truc Lam Temple which contained some lovely sculptures, topiary, flower gardens and water features. This was one part of the "exercise" portion of the morning, and we walked around it for a good 20 minutes before rejoining Bin and Ky. 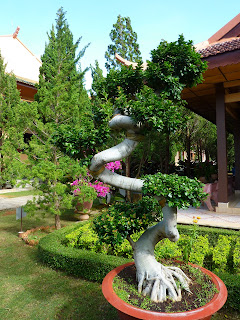 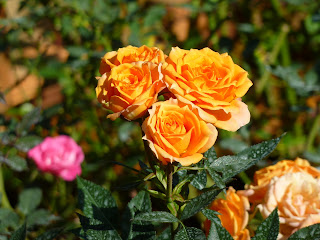 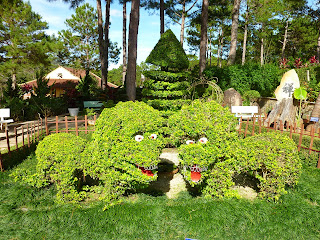 Soon after, we arrived at the Chicken Village, so called because of the huge chicken statue in the centre. We have no idea why. This was followed by a mushroom farm where we saw a packed greenhouse full of mushrooms. When I say full, I mean there really wasn't "mush room" in there. Ahem.

On the next stop, Bin found some "lipstick trees" which he cracked open a few fruits from, and proceeded to use the crushed seeds (which act as a natural colourant and flavour for curries, and also as a dye - hence the informal name of the tree) to draw a Vietnamese star on my forehead. 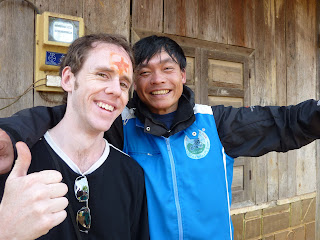 We stopped for lunch at a cafe with magnificent food (a literal feast - there must have been 9 different dishes) and even better views of the vista. More exercise followed, as we were made to climb a huge flight of steps on a hill, which must have been some sort of abandoned water system, and which offered magnificent views of the rural countryside. Bin and Ky pointed out some shrubs (Mimosa) which closed their leaves when touched. I felt like a kid again, discovering new and wonderful things that are, at their core, simple and all around us. It made me realise how much we simply ignore our surroundings back home, barely appreciating nature as we take it in.

We passed over a bridge under which a floating village rested in the waters, and before long we were at our final destination of the day - Lak Lake.  This is a Mnong village, with its own language separate to Vietnamese, where the villagers live in longhouses. We had the opportunity to either stay in an authentic longhouse for the "real Vietnam" experience, or take the easier option and stay in a guesthouse. After a day on the road, we'd opted for the latter and were happy that we did; Bin informed us that the villagers usually wake up at around 4am to kickstart the generators and get the vehicles moving for the day ahead. This, whilst undoubtedly a "real" taste, would have probably wiped us out for the following day. The evening meal at the restaurant down the road was equally excellent, and we shared a couple of small bottles of rice liquor, whilst Bin and another Easy Rider showed us some classic pub tricks (removing a bank note from between bottles, etc) and in return I showed them some card tricks.

We then thought it would be a good idea to track down a karaoke bar. Bin was enthusiastic, Ky less so. I will hastily brush over the fact that we decided to get on the back of bikes with people who had been drinking (without wearing helmets, no less) and skip to the part where we spent 15 minutes trying to find a place. Vietnamese people love karaoke; it's incredibly popular all over the country. And when I say popular, I mean that at 8:30pm on a Thursday, we had to try three different karaoke bars before we could find one that had a free booth. After avoiding police traps thanks to locals warning us that they were performing spot checks on people wearing helmets (drink-driving is apparently fine), we got ourselves a room and proceeded to belt out some tunes. Well, the three of us did - Ky wasn't particularly up for it. I think he was knackered, bless him. Bin certainly gave it both barrels, and we found out he's a not-so-secret Lionel Richie fan. 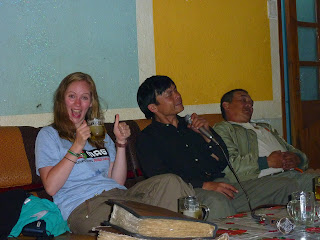 The next morning, feeling absolutely fine, we had a rather meagre breakfast of fruit and bread and set off back to Lak Lake to watch the elephants being brought in to the village and fed. Banana plants were very popular, with one elephant dragging an entire tree branch down the road with it after he was prompted to finish his meal and move on. I can understand: you never know when you may get hungry later. Bin treated us to some excellent guitar playing (Metallica, The Eagles, more Lionel Richie) over some Vietnamese tea, and I attempted to play "Nothing Else Matters" and failed miserably, so we got back on the bikes again.

Next stop was a rice field where a few local ladies were busy toiling in the sun and cutting the crop. After being invited to have a go ourselves we made a bit of a hash of it with the sickle, much to the amusement of the locals. Fortunately, no limbs were severed. The wind had been blowing strong all morning, and at this point it decided to really hammer both us and the bikes. It blew over the bike I had been on, rolling over my luggage in the process, and blew Gilly off completely as she attempted to get back on. She was fine though, apart from a bruised ego.

We drove on - slowly - over a bridge that had been bombed during the war, and then on to another area beyond it which had a burned out church sat in the middle of a field. Bin and Ky stopped for more tea whilst we wandered down to the church shell, and when we came back they showed us some of the ordnance that had been left behind by the war, including a 20kg bomb shell.

This was followed by a stop at a local animal lady's house. She kept scorpions and boa constrictors. One of the snakes was a hefty 35kg, and must have been a good 10 feet long at least. After holding a smaller one, Gilly then had the monster wrapped around her: 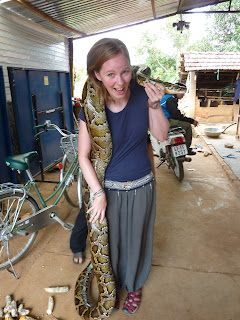 I helped put it around her, and I couldn't believe how heavy it was. I'd held boas before but nothing this big; not ideal pets, but pretty harmless to humans and fairly cute in their own scaly way.

Not far away was a series of peppercorn trees. We tried a few freshly picked peppercorns which blew our heads off. Not spicy, just really...peppery. Odd, that. I picked a few for us to mix in with our lunch which we had soon after in Buon Ma Thuot - the capital city of the Central Highlands. Compared to the other food we'd eaten on our tour, this was fairly bland (even with the peppercorns) and also cost more than the other meals. Maybe we'd been spoiled early on.

The highlight of the day was visiting the national park outside the city after lunch, and going to the waterfall inside. We also had plenty of time to swim. The water was warm in places as the sun was baking down, and we managed to get a few good snaps of the surroundings: 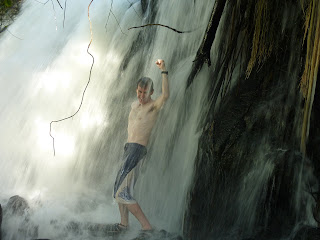 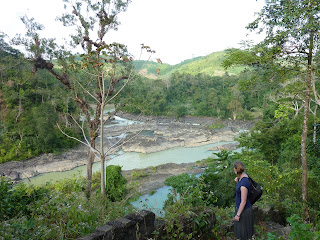 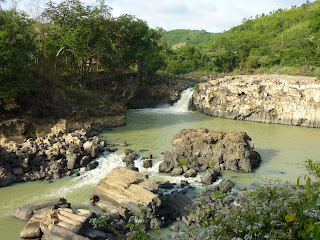 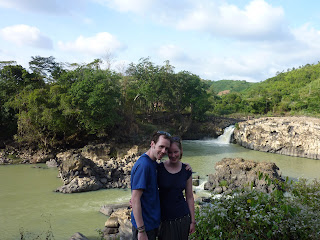 And with that, it was time to head back to Buon Ma Thuot again to get some food ahead of another sleeper bus which would drop us off in Ho Chi Minh on Christmas Eve morning. We said a sad farewell to Bin and Ky who had been magnificent during the entire tour: 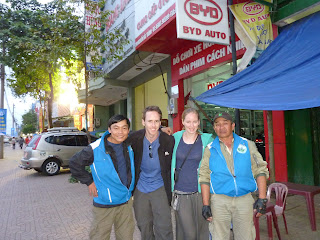 In the evening I found out that when the bike had gone over with my luggage in, the weight of it had crushed the bag, my Kindle case, and the Kindle itself. The Kindle was completely unresponsive; it accepted power, but the screen was crushed. We'd been told that Easy Riders had insurance, so I rang Bin only to find out that the insurance covered people and not belongings. Who knows what would have happened if any of our stuff had been stolen from the bikes en route... Regardless, I rang my own insurer who told me that it was probably covered, but they couldn't guarantee it. Typical insurance company, then. I would have to submit a claim on my return (if not earlier) and they would assess it. I was obviously more than a little peeved to learn that Easy Riders hadn't clarified the insurance situation at their end, but Bin must also have been worried as he asked a colleague in the area on a tour to come into the bus station office where we were waiting and have a chat. He said that whilst it was a freak accident that had never happened before, the name and reputation of the Easy Riders was important, and if I wanted, Bin would find the money to replace the Kindle. This put me in a bit of an awkward situation; obviously the company should have explained the insurance side of things beforehand and I could have made provision to move valuables to my smaller bag which would have been more protected, but on the other hand I couldn't really ask Bin to fork out $230. Easy Riders, it turns out, isn't a company but a club. They pay tax to the government, are registered, but arrange everything themselves - including tours. It seems that each member keeps the fee they agree with tourists, and they are effectively individuals working under a group name. Therefore there isn't a company account; anything Bin paid out would have to come from his own pocket. Troubled by this, I decided to see what other options were available when we got to Ho Chi Minh City the following morning. R.I.P. Kindle.

In spite of this - our first major loss on the trip - we thoroughly enjoyed our time with Easy Riders, and would highly recommend taking a tour with them to see more of Vietnam than the well-trodden tourist traps in the popular towns and cities.
Posted by Rob at 6:34 PM