When we first arrived in SE Asia over 3 months ago, we weren't particularly taken with Bangkok. We found the constant noise, smells, traffic and the relentless attempts to scam you were overwhelming. Now, after some time travelling around the good and not-so-good places in Thailand, Laos, Vietnam and Cambodia, I saw Bangkok in a whole different light. The food smells on the street from the multitude of stalls which were previously overpowering were now delicious, the scam attempts were laughable, and the traffic was a doddle compared to Vietnam. I was able to appreciate the madness a lot more, and also take in some of the incredible shopping malls that the city had to offer. And they had a lot.

After arriving at the bus station in mid-afternoon, we ignored the fixed-price scam touts and took a taxi-meter to Hua Lamphong train station to get a night train booked for the following evening. We were hoping to get a sleeper carriage, but unfortunately it looks like they sell out far in advance so we were left with the option of a second-class carriage with air-con and a reclining seat. We got a combination ticket which included transport from Chumphon to the ferry, and the ferry ride to Koh Tao. With that bit of admin out of the way, we took another taxi to Ecotel Hotel after first printing out directions in Thai for the taxi driver, as it seemed that no-one had any idea where the place was. When we arrived, we were very happy with the place. Great location near Siam Square and the various other malls, lovely large room with all mod-cons, and breakfast chucked in as well.

We headed out to Platinum Mall to have a mooch about. Our main objective on this "shopping stop" in Bangkok was to find Gilly a replacement MP3 player; Bangkok was supposedly one of the best places for electronics in SE Asia, outside of Singapore, so our hopes were high. We didn't get too far that night, as the mall we'd chosen was a fashion outlet so I had to drag Gilly away before she blew our entire budget on dresses and bags. We saw some "candy chefs" making rock from liquid sugar which was fascinating and then, feeling hungry, went to the food court (which was so extensive, and had so many outlets, I actually lost the menu item I was going to order and had to settle for something else!). This was followed by a visit to Swensen's. They have more Swensen's in 2 square miles of Bangkok than I've seen anywhere in Asia. Some shopping malls have 2 or 3 in the same building. It is glorious insanity, coated in chocolate. The great thing about Swensen's is that they are always bringing out new promotional sundaes to try in addition to the normal menu. So we went for one: 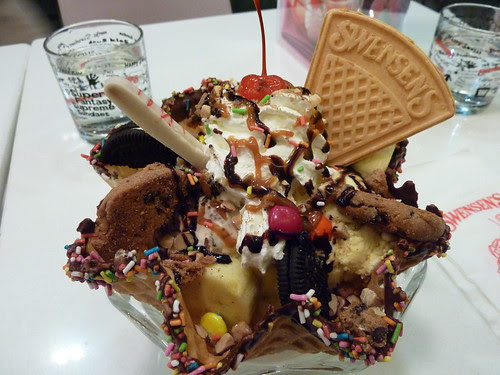 Then we tried to find a cinema. Unfortunately, Mission Impossible: Ghost Protocol wasn't showing at any of them, so we decided instead to give the XD 6D motion ride experience a go in the Central Plaza mall. It was the most fun 7 minutes we'd spent on a "ride" for quite some time. Ostensibly a cinema seat with hydraulics attached, you are given 3D glasses, pick a 3D film, and then sit down for the ride of your life. Even though the ride we chose (a canyon mine cart rollercoaster) is completely computer-generated, the motion is so well done that you suspend disbelief for large portions of the time and it does actually feel like you're hurtling along a mine track. Absolutely fantastic: we had huge grins on our faces afterwards. 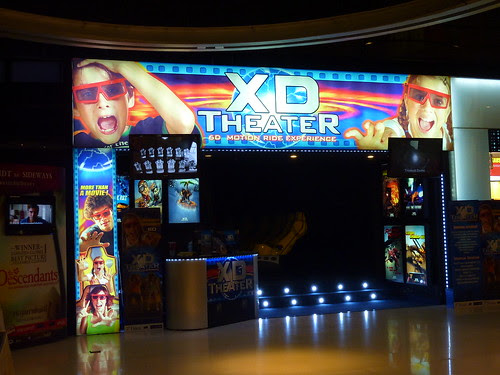 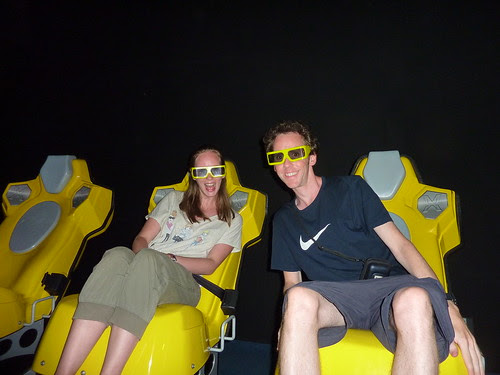 After a decent breakfast at the Ecotel, they kindly allowed us to stash our bags for 12 hours the next day whilst we went shopping. And shop we did; we must have trawled through a good 30 floors of mall space over the course of the day. We managed to get the closest thing to a decent MP3 player (a Creative Zen Style M300) in the last mall of the day - Panthip Plaza. If you need electronics or want to build your own PC, this is the place to come to. It has literally everything. I was in geek heaven. 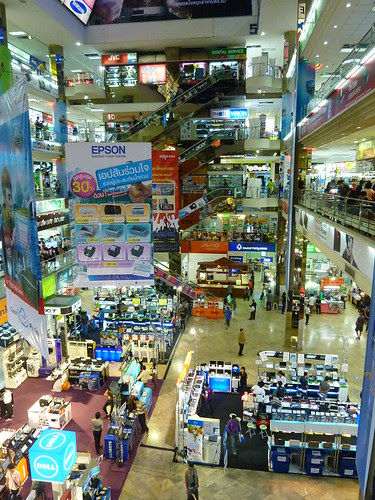 With MP3 player and additional memory card in tow, we grabbed a meal at Best Seafood (I went for chicken...) and then got a taxi to the station to prepare for our 10:50pm night train to Chumphon. I enjoyed Bangkok much more second time around, and would definitely come back for another visit.
Posted by Rob at 3:04 PM