I wasn’t expecting to like Manila. Everything I’d heard from people, be they friends we’d met on the road or friends from back home, had been negative. I wasn’t disappointed; the city is a hole. I immediately regretted booking 3 nights in the city instead of just one or two, but we were there so decided to make the most of it.

Rocking up in the evening to the end of the bus route, we then had to change to a taxi to find our abode for the next three nights: Leesons Residences. The driver found it with relatively little difficulty, but after taking our bags out he said “You give me extra now.” I gave him a questioning look. “Tip! TIP!”. First time I’d ever had a tip demanded from someone. I’m not sure he fully grasped how it worked. What was funnier was the fact that I had deliberately overpaid for the taxi, and he hadn’t grasped the fact that he was holding his tip, until I pointed out the meter and the corresponding extra cash in his hand.

We’d been expecting the Philippines to be cheaper in terms of accommodation, but that was far from the case. Then again, I’m sure we think that for every new country we visit in SE Asia. This place was a “serviced apartment”. That means that the place had self-contained units as rooms – including a kitchenette (with a sink and cupboards but no cooking appliances), en suite and a decent sized living area. Bizarrely though, it had no waste bin, there was only one towel (even though it was a double room) and the guard downstairs appeared to be the person running the place. We didn’t fancy wandering the streets in the dark trying to find a decent place to eat so we ended up  in McDonalds. I’m not ashamed to say it tasted good. The next morning we got a second towel but the apartment didn’t seem to stock anything additional so getting another pillow/foam brick was out. It was serviceable but not particularly comfortable and the traffic outside was loud even in the fairly quiet street we were staying so sleeping in late wasn’t an option either. Not the best introduction to the city.

We managed to find the LRT station (Manila’s equivalent to the Tube)  and went off in search of Manila’s sights. Wandering around the city without a map or guidebook was tough. As dire as Lonely Planet is, I’d take it over feeling helpless and lost any day. We managed to find our way to a mall, and picked up a city map along with some goodies from the spectacularly named “Brownies Unlimited”.
First stop was the National Museum, which was free – bonus – but only had about 4 rooms open to the public, so we weren’t there for long. There was a big sculpture made from glue and hardened sawdust portraying a strange fantasy story which must have taken considerable time: 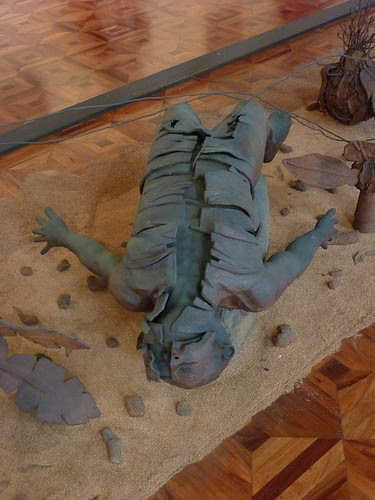 Just behind the National Museum was the Museum of the Filipino People which had a decent collection of displays and information on the country’s cultural development, as well as a couple of galleries which displayed some of the masks worn for different celebrations, and the finalists of a painting competition: 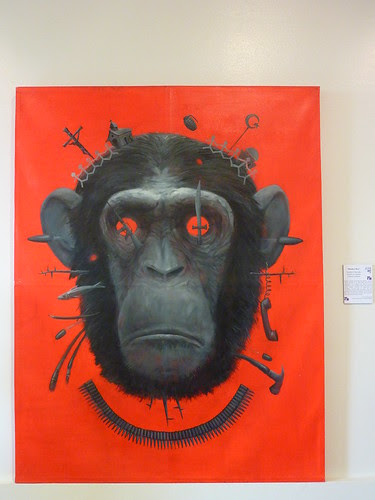 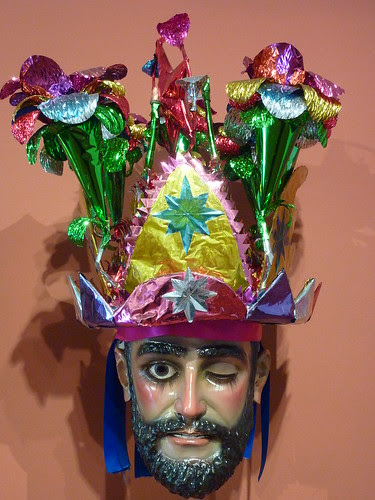 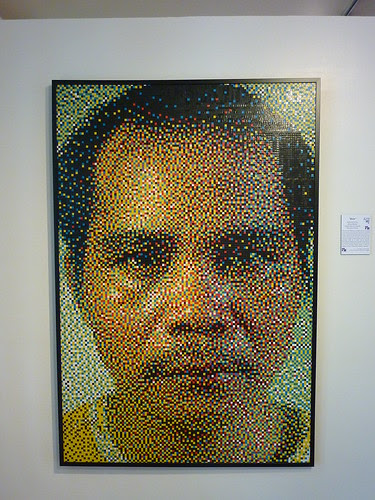 Most of the paintings has either religious overtones or were railing against the gun culture that still appears to be prevalent within the country. Security is definitely at the most heightened I’ve seen in any place we’ve visited. There are security guards in almost every shop (one was waiting at the McDonalds counter the night before) and all of them have guns. They search your bags before you enter malls, frisk you before you get onto trains, and are a constant, conspicuous presence throughout the city.

We grabbed some lunch from one of the many, many mall eateries before heading over to Intramuros on the train. This is the oldest district in Manila and is known as the Walled City due to its lengthy walls which almost circle the entire district for a good few miles. It's also, as we found out, a haven from the hellish noise of the city proper. On entering we met a guy on a trishaw (a bicycle attached to a sidecar) who offered to take us around the city. He quoted 300 pesos for 30 minutes and almost immediately dropped to 250, then 200; we were a little dubious and very hungry so we declined, but he persisted and took us to a fairly decent budget restaurant where we had a Filipino mini BBQ set for about 75p each. After getting fed, we took him up on his offer and he cycled us around a few of the sites. His English wasn't bad but was thickly accented so we had to rely mostly on the signs at each of the points we stopped at, most of which were churches or schools. 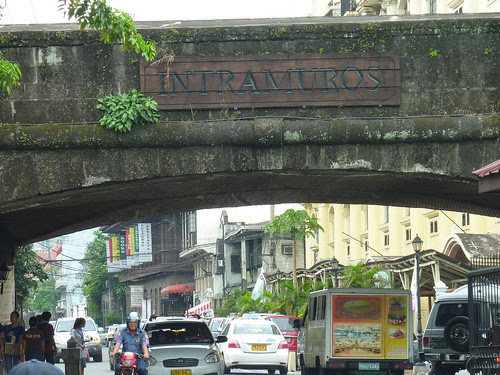 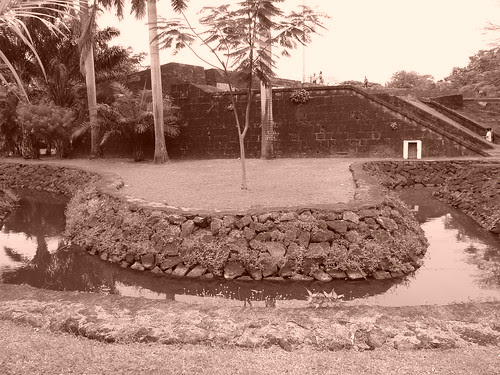 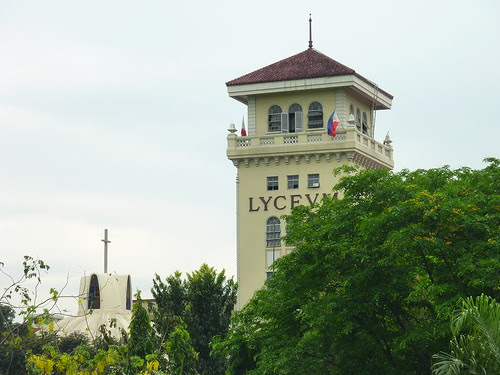 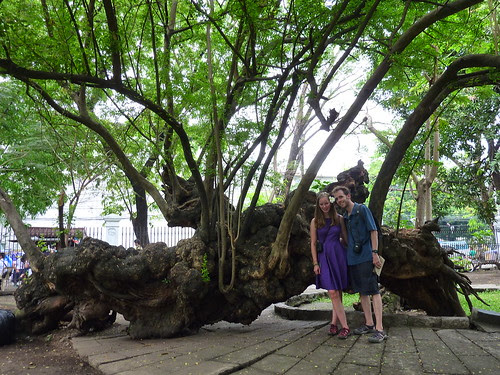 As time ticked on, it became apparent that we weren't going to get anywhere close to finishing the tour on the trishaw with our guide (who was more than happy taking a casual approach to letting us wander around) and we realised that we'd be paying for every 30 minutes we were with him. We decided to cut our losses and head off on foot. He didn't look too upset; it must happen fairly frequently (we later found out that the same things had happened with Paul and Fi). We trekked on to Fort Santiago, the main historical point of interest in Intramuros. 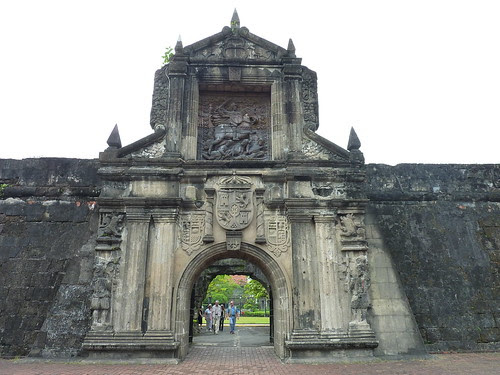 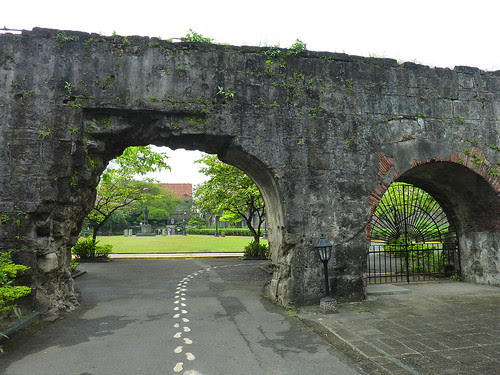 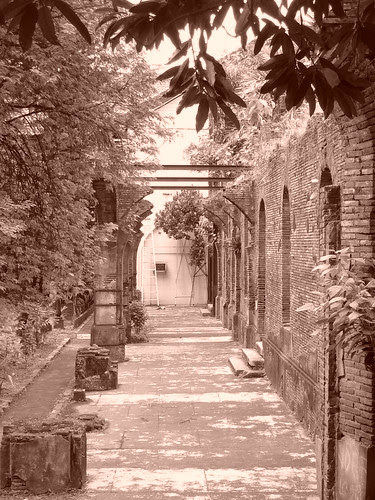 It felt like the essence of a small Spanish town had been stuck in this heaving, polluted city, and as such was completely out of place. Not that this was a bad thing; we enjoyed wandering around the ruins but more importantly we learned a lot about the Philippines national hero: José Rizal. A polymath and activist whose desire for an independent Philippines led to his execution and martyrdom aged 34, and subsequently the Philippines Revolution, he is presented with almost beatific reverence throughout the country. Reading some of the essay and letter excerpts within the memorial in Intramuros, it's clear that he was a very intelligent and articulate man, and I would certainly be interested in reading some of the works he left behind at a later date. 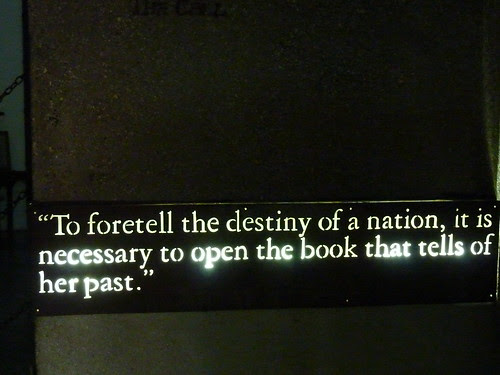 Elsewhere in Intramuros, the Manila Cathedral and St. Agustin Cathedral are two of the architectural highlights. 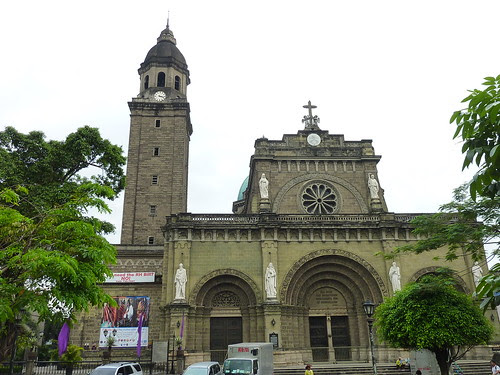 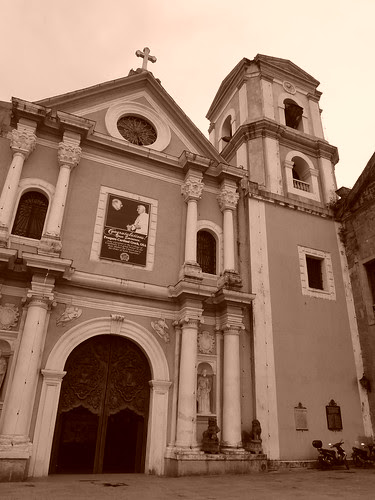 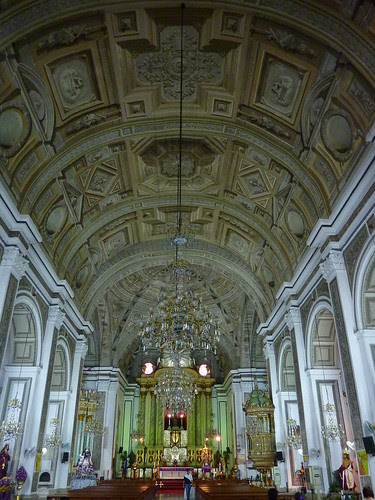 I also had a chat with a couple of gents in the park: 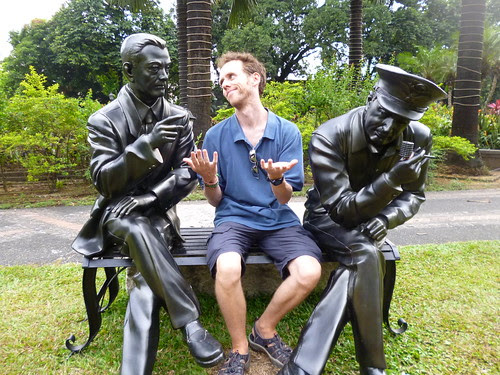 It was getting fairly late in the afternoon, so we didn’t get the chance to explore these buildings properly. I think if you’re in the area, you could easily cover Intramuros in a day. We’d crammed in two museums beforehand though, so time wasn’t on our side.
As well as the trishaws, you can also get around the walled city by horse and carriage, should you desire (and should you have money to burn): 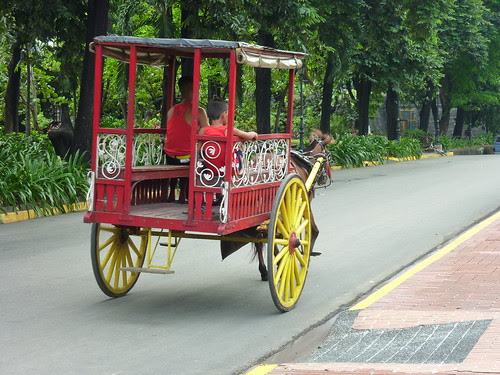 A more cost-effective and cramped way of getting around Manila and the Philippines in general is by Jeepney. These are elongated 4x4s with psychedelic paint jobs, and they can hold a good 20 people, with another 4 or 5 hanging off the back. Rides cost only a few pesos but they can’t be treated like taxis; they’re more like buses which stop roughly near the road you need (unless you’re lucky enough to be on one of the roads their route goes down. 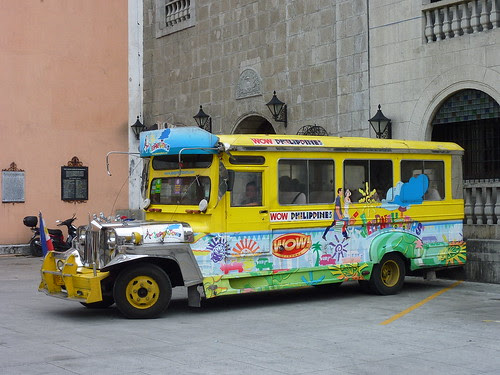 Dinner came courtesy of a pizza place in one of the malls, marvellous.
The next day we took a leisurely trip to the Ayala Museum. This is one of the best museums I’d been to in SE Asia. As well as a couple of art galleries, the highlight was the diorama exhibit with audioguide, which covers the history of the Philippines over the space of 60 different dioramas depicting key scenes from the country’s past. These included everything from early settlers, through to the introduction of Christianity, the Philippines revolution and Rizal’s execution, WW2, the Marcos rule and the present day. More than just standard papier maché sets, it was clear that attention had gone into each scene, and the accompanying audioguide filled in the narrative clearly and – more importantly – was interesting. If you have any interest in Filipino history, then this is the one place you need to visit.
Restaurants close to our accommodation were in short supply. So short in fact, that we were left with two options – Jollibee (like a budget version of KFC) and McDonalds. We hit the latter for some late night munchies before retiring. I have no idea how the Filipino population isn’t all obese, as the number of fast food restaurants around the city is staggering. I’ve never seen so much cheap, unhealthy food in one place. I would have expected it in the US, but there is literally a KFC/McDonalds/Pizza Hut or equivalent on every corner. Malls are even worse (or better?) as they also have doughnut stands and shops, cookie stands, brownie shops, and heaps of bakeries on every level. There’s the odd fruit stall and smoothies stand here and there to make you feel a little healthier, but if you go shopping your choices are basically limited to carbs and sugar with a side portion of fat.
Our last full day in Singapore was spent in the morning looking around for likely dinner venues, and also trying to find a bar. The reason: Paul and Fi were meeting up with us for the third time on our travels later that day. We hit the jackpot not far from Remedios Square, about 2km from our lodgings, when we stumbled into a Robinsons Mall. More food than you could shake a fried chicken wing at, and – bonus – a cinema. We had a few hours to kill before the guys arrived so we took a risk, and went to watch John Carter. This was about a US rifleman who gets transported from the civil war to Mars via a magic crystal, where gravity affects him differently (until they forget about that later in the film) and he gets caught up in some sort of battle between Red and Blue (they have different names, but they’re colour-coded so you just about know who is who), gets a haircut, meets a scientist, and gets an acting lesson from Dominic West (McNulty from The Wire

) who spends the film hamming it up as the bad guy whilst wearing some serious guyliner. I’m not sure if Red or Blue won in the end, but there was the requisite number of explosions, overwrought dialogue, and passable CGI to make it watchable if far from good. I wasn’t surprised to learn afterwards that the film has bombed, with a $200 million outlay plus $100 million marketing only bringing in a return of $180 million, making it one of the biggest box office flops in history and a disaster for Warner Bros. I’m glad we were to help prop up their empire.
Beers were heartily downed once we met up with our fellow Miltonians: San Miguel at 45p a bottle, no less. After Malaysia’s excessive alcohol pricing, this was a welcome return to form. We found an Italian in the mall and had an average meal in enjoyable company which made it better, before we all headed back to Leesons Residences (Paul and Fi had booked in on our suggestion), and we took a taxi to the airport to catch a flight to Cebu.
We didn’t see much of the next city. Cebu is supposedly like Manila but a lot more relaxed, but we were only there for the night at Palazzo Pensionne, an excellent B+B/hotel hybrid with big, comfortable rooms and breakfast included. We left early the next morning to catch a bus to Maya, and from there took a ferry to our next destination – Malapascua island.
Posted by Rob at 5:26 PM