We got up at some ungodly hour and dropped the van off at the backpackers' before walking over to the pier, where our vessel awaited: the sailing yacht, Hammer. This was a champion yacht, winning many sailing competitions in its time before it was retired from professional racing in favour of more recreational use. 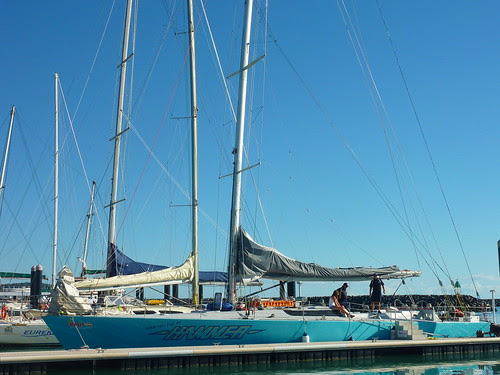 From the outside, it didn't look like much and we were unsure how it was going to fit 19 customers plus crew below deck. We needn't have worried; whilst not quite Tardis-eque, the yacht had a surprising amount of space.

After a tour around and introduction to the crew (Mick the skipper and Dale, with another being picked up en route), it was time to set off from Abel Point Marina and get stuck into sailing the Hammer. As there were only three crewmen, it was necessary for some of us to help raise the sails. I'm no sailor, but I've learned that you can do pretty much everything that needs to be done on a yacht by pulling one rope really hard until a bloke tells you to stop. Gilly and Paul took the first shift whilst Fi and I handled the important task of sunbathing. 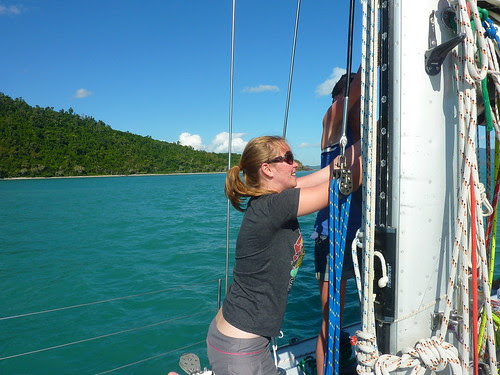 If you've never been on a racing yacht before, it's a little different to a catamaran. The boat is built for speed, so you're not going to get too much comfort on the deck. Firstly, forget sunloungers and cocktails; you'll be too busy making sure you don't smack your head on the mainsail mast as it swings around. Secondly, in order to get up to a decent speed, the yacht sails at an angle. This is usually between 30 - 40 degrees but when they're racing along, it can get up to almost 90 degrees with the sail nearly touching the waves. 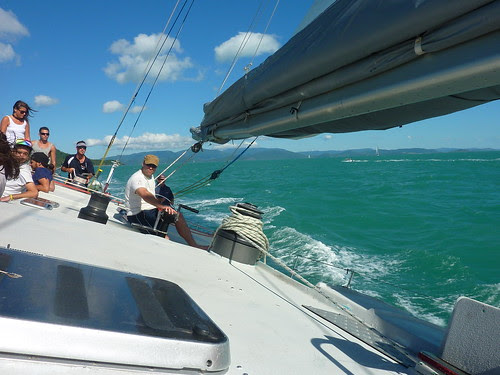 We collected our third crew member - Chopper - from the Young Endeavour on the way. 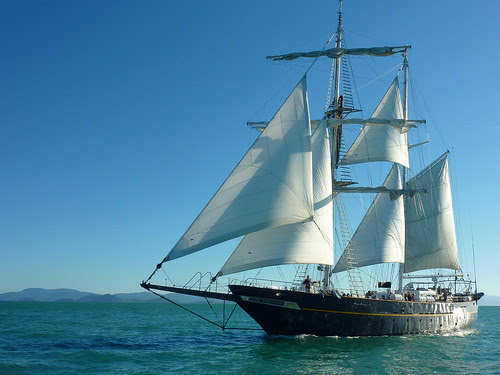 Lunch was self-service with sandwiches, salad and quiche prepared by Dale. The water was practically dead calm and there wasn't a cloud in sight. Mick said that we'd picked a fantastic couple of days to come on a cruise as the weather was likely to remain as good for the rest of the trip.

We'd stopped in Cataran Bay, which was a decent stop to do some snorkelling. Even after a significant number of dives, I'm still no good at snorkelling. I'm not sure if it's to do with the mask, the lack of pressure to keep it glued to my face, or a combination of both. Every time I took a look underwater, the mask would fill within 20 seconds. Despite that, I managed to take a few shots with our cheap disposable underwater camera from Laos, which may or may not turn out OK. After about an hour we were starting to turn wrinkly, so came back to the boat for an afternoon snack of some fantastic nachos.

After some more cruising, it was starting to get dark so we pulled into Tongue Bay for the evening. We'd only brought a 2 litre box of wine with us unfortunately, so a crazy party was off the cards. That didn't stop us all having a great time and making some new friends, in particular Colin and Julie from Ireland, James from England, and Sam, Guillaume and Lola from France.

Sleeping on the boat was easier than expected. Planted as we were in a bay, and with little to no movement on the water, it wasn't difficult to drift off to sleep - even if the mattresses were those plastic-coated kind that you only really see larger versions of in the sports cupboard at school.

The next morning after a decent breakfast we set off to Whitehaven Beach. The walk up to the beach was interesting in itself, as we spotted this huge lizard hugging a tree. 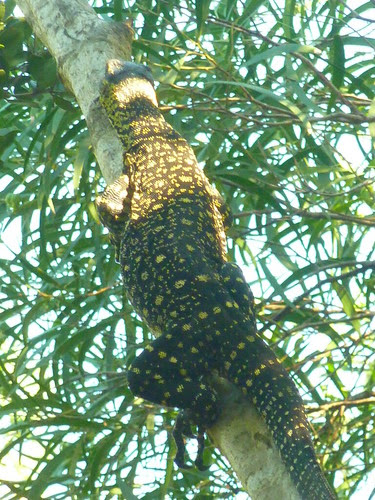 The first sight of it once you climb up through the trees and reach the pinnacle of the hill overlooking it is breathtaking. 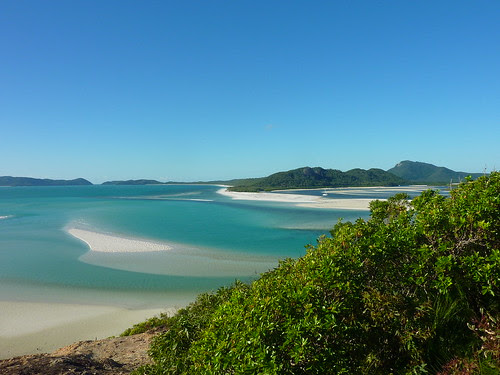 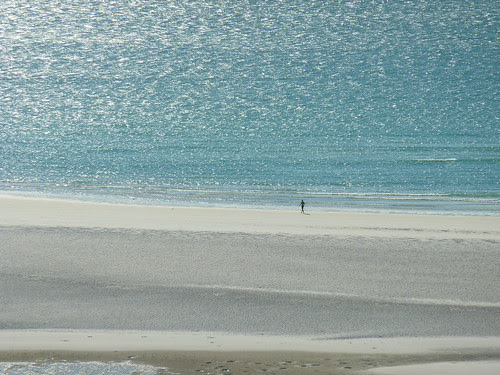 The sea is home to stingrays happily swimming in the shallow waters along with some lemon sharks, both of which you can go and swim with. Steve Irwin aside, stingrays are fairly docile and won't bother you as long as you don't box them in or kick them in the head. Similarly, lemon sharks aren't bothered about humans. 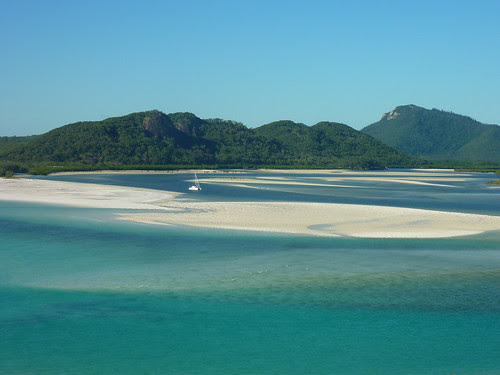 The beach is as close to paradise as you can get. Perfect white, cool sand (something like 99.5% fine silica), a wonderful breeze and not a fag end in sight. The things I dislike most about beaches are a) the sand getting *everywhere* and b) the heat-retention of the sand making it too hot to lie or even walk on. Thanks to the consistency of the sand on Whitehaven, neither of these are an issue. 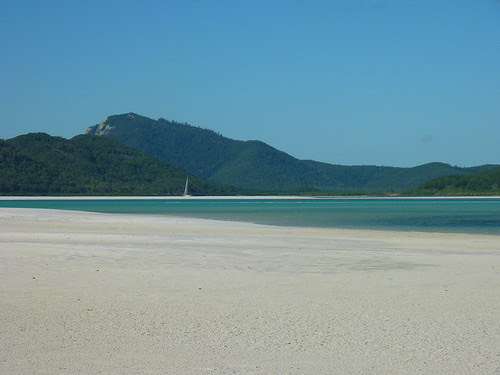 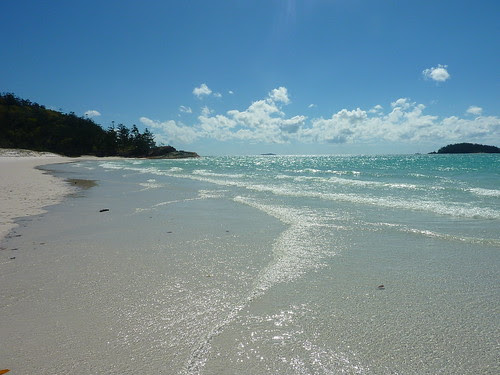 Due to the time of year, you have to wear stinger suits for safety if you want to go swimming. Box jellyfish are sometimes found in the area, and they can be fatal if you're unlucky enough to be stung, though it's more of a precaution on behalf of the sailing crew than any real likelihood of danger.

I can honestly say that Whitehaven is the best beach I've ever been to; it's obvious why it wins so many awards. We spent a good 3 hours there in excellent weather and swam with a few stingrays but didn't see any lemon sharks, sadly. As you can tell, everyone enjoyed the trip: 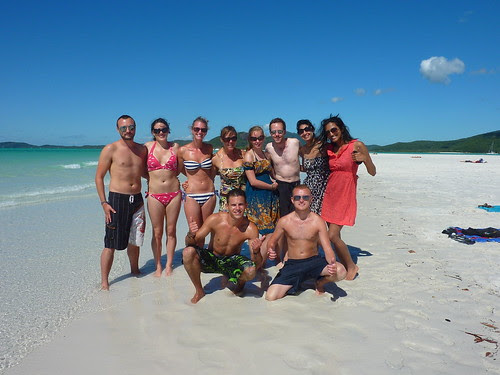 Funnily enough, I was suffering from a cold through the entire trip so I was probably the only one on the beach in 24 degree weather who was sneezing and sniffling. Despite this, the time to return to the boat came up a lot faster than expected, and we reluctantly left Whitehaven behind, and took the 4 hour journey back to the mainland. On the way, we found out that Francois Hollande had become the new French PM which went down very well with our new French friends. Paul also became a temporary captain on the way, and took the wheel for a while: 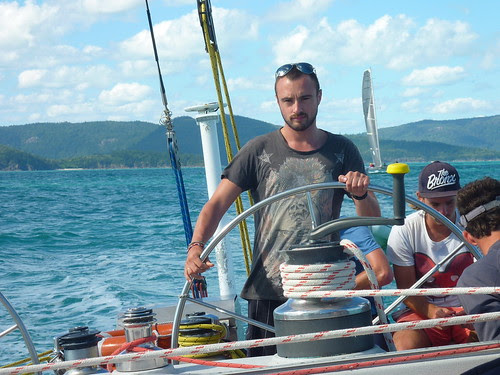 We'd only ever really done one "relaxing" cruise before, in Skiathos. The Whitsundays were another level: sublime surroundings, crystal clear turquoise water and not a wave in sight. I can't really say I'm a boat person, but I couldn't fault anything with the trip in respect of my lack of sea legs; it was as enjoyable as I'm ever going to get without jumping onto a huge P+O ferry (which is unlikely to happen - too many people for my liking).

We returned to Airlie Beach Backpackers around mid-afternoon for a well-deserved shower followed by some excellent fish and chips, before returning to Flametree Park in the evening.
Posted by Rob at 4:16 AM

This looks beautiful! Now I need to plan a trip to Whitehaven... just when I thought I could take off my travelling shoes for a while and settle in at home! Great to follow your travels vicariously from the comfort of our very own house back in Toronto. Looking forward to seeing you guys next month!