We piled into the Ski Bus at 7:45am and after an hour and a quarter on a terrifying mountain-side road covered in ice and slush (the driver stopped at the base to put snow chains on), we arrived at the ski resort. Heading straight to the kit room, we got ourselves fitted with boots, poles, skis, jacket and trousers. All of it was really comfortable. I seem to remember, the best part of a quarter of a century ago, that my feet were in agony during and after the skiing. Not so these days it seems. Everything is padded up to the nines and waterproof, and it made me feel a bit more confident.

The views from the car park of the ski resort are, as you'd expect, stunning. I also saw a kea, the only alpine parrot in the world. According to one of the instructors here, two of them were locked in a room with a bolted door, and the parrots observed how the guard unbolted the door and opened it, then copied him to do the exact same thing and escape. Animal Planet did a test on the intelligence of various animals around the globe (dolphins, chimpanzees, and so on) and found the kea to have a remarkable brain. They devised a test whereby food was put at the top of a long tube, with the feeding hole at the bottom. To get the food out, they had to manipulate a system of pegs and platforms to get the food out, sometimes working together to allow the food to drop. Two keas managed to complete this test in four minutes. I really need to look up this episode when I get home. On a separate note, they are also  destructive creatures who will think nothing of ripping the black seal rubber from your car, along with anything else they can remove. One banger was put in a kea area for 6 months to see what would happen to it - after the time was up, the testers found the car to be written off; the keas had pulled anything that wasn't metal to bits. Rule of thumb: don't leave cars where keas can see them. 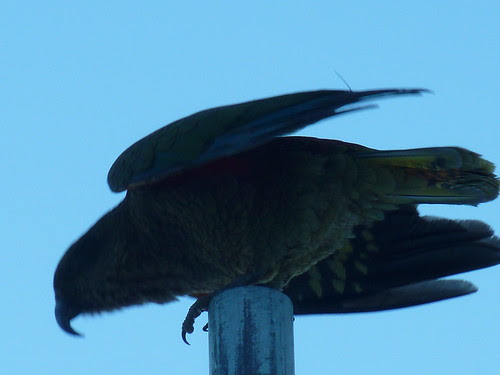 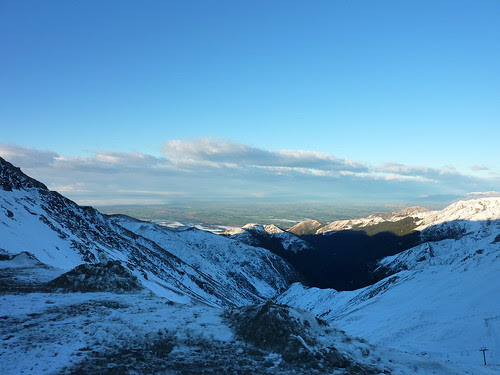 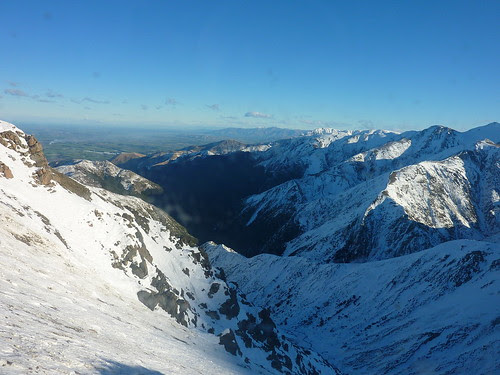 Our instructor for the first day was Wanda, who was more than capable of showing us newbies how not to fall over. Starting with simple exercises like walking around with skis on, and graduating to taking us up the beginner's slope and letting us ski down it, she was very encouraging. I found that I could only turn left and not right, the latter being almost painful to do. This was something which I didn't manage to master by the end of the day and left me feeling a little frustrated. On the plus side, I only fell over about 5 times. Gilly stayed on her feet for the entire day; quite an achievement.

The lesson was split into 1.5 hours before lunch, and 1.5 hours after, and we were in a smallish group of about 7 people. Wanda took us on a ski lift after lunch to the very top of the mountain (we weren't allowed to ski down it) just to appreciate the view from Mount Hutt, which was stunning. Then it was back to hurling ourselves down the slope again. When 4pm rolled around, we were both exhausted. 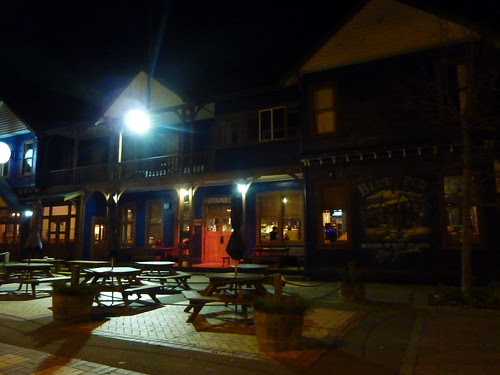 Methven is a quaint little alpine town, it looks a bit like Everwood. The kind of place you may consider retiring to, or at least spending a few months a year in to brush up on your skiing. Whilst Mount Hutt is obviously a big income for the town, the main revenue-earner is still farming. The ski season only lasts a few months, but farming provides year-round employment for the locals.

We were raring to get on the slope the next day. It was a Monday, so the place was practically empty and we had the entire beginner's slope to ourselves. This let me practice my turns without fear of hitting anyone, and in the hour before our lesson started I managed to turn left and right as well as stop when needed. This was a huge confidence boost for me ahead of our lesson.

Our instructor for the second day was Barry, a Methven local who was so enthusiastic he'd have put Steve Irwin to shame. We had a few goes on the beginner's slope to show him what we could do (he skiied backwards to watch us, and was better at it than us going forward...that's a career ski instructor for you) and he soon declared we were ready for a bigger slope. This was exciting, but also a little nerve-racking as a huge snow cloud was rapidly approaching and engulfing everything before it at a frightening speed. 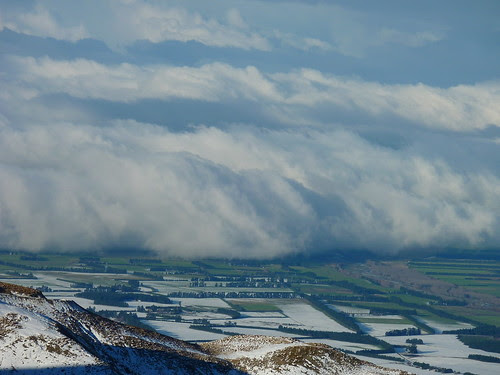 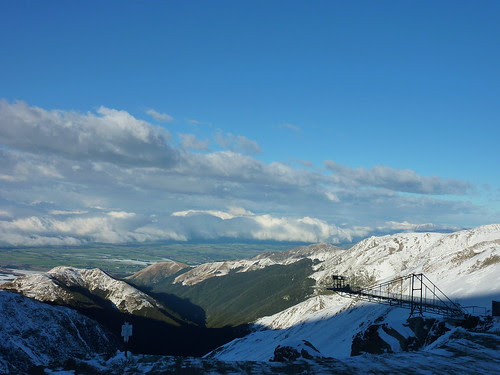 The metal structure in the second photo is actually an old bungy tower, no longer in use. As you might be able to tell from the video, the cloud pulled no punches, and we were soon unable to see more than 10 metres ahead of us. An ideal time then, to jump on a ski lift and go up the mountain. 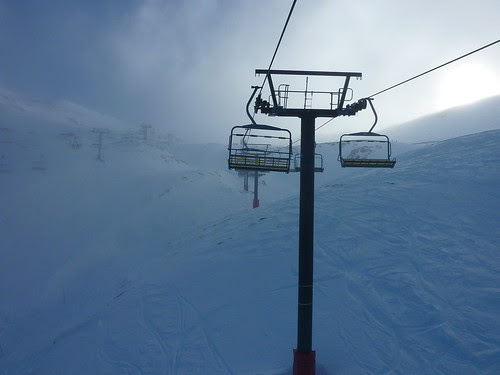 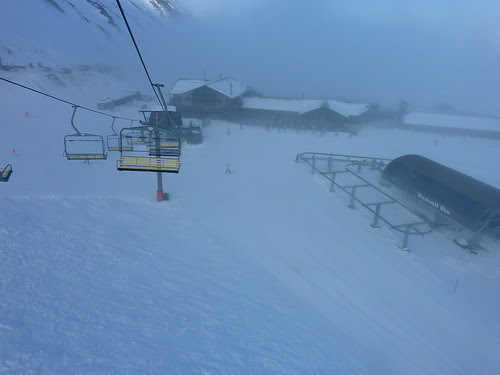 Going from the previous slope to this one is like driving a Smart car and then jumping into a Ferrari. The speed comparison is ridiculous. Making a wedge with your skis is enough to stop you on a beginner slope. Good luck trying to stop doing that on a steep hill. No, what you need to do to stop is to turn. Ah yes, turning, my favourite part of skiing. Put it this way, my hip flexors and thighs didn't know what hit them. After a slow and careful descent the first time down, we gradually built up more and more confidence under Barry's watchful eye, until we were zipping down at a speed which I can only describe as "suicidal". I could just about turn to stop, but when I hit a huge straight and got up to speeds which felt must have been at least 120mph (but were probably only about 20-30), I was too terrified to even think of stopping. I just nudged my skis vaguely left and right and hoped that no-one would be in front of me. There's a scene in Red Dwarf where Holly is describing navigation at "faster than light" speed; he says that by the time the ship has seen something in space, it's already passed through it. That's how it felt as I hurtled down the slope. 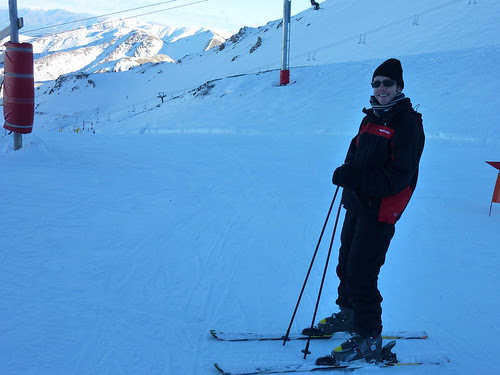 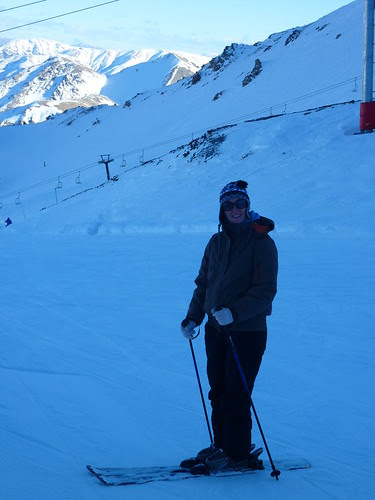 Still, with a bit of practice I was soon able to turn. The problem was stopping after turning. It's all very well going downhill fast and then turning left. Momentum dictates that you just end up going sideways fast instead. This usually ended up with me planted face-first in the side of the hill (the alternative was to turn right and plummet over the edge onto another rockier slope which had been closed off - not a good idea). In some ways, a lack of visibility was better than being able to see; we could concentrate on Barry's red jacket and just follow his lead.

What really gets you down is when you see kids skiing like they've been doing it for years. Unfortunately, most of them have. We saw one parent teaching her toddler how to ski. You may think when I say toddler that I mean a 4 or 5 year old. That isn't what I mean. This kid was 18 months old. I shit you not, he had a dummy in his mouth and was probably better at skiing than he was at walking. It made me want to pack up and go home.

At the end of the day though, I was a lot more confident on the slopes than I had been two days prior and found skiing to be highly enjoyable, far more than I was expecting it to be. 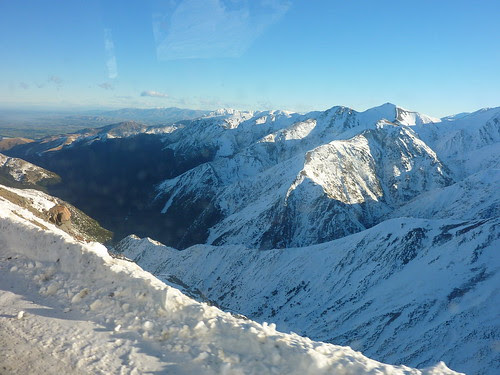 We handed our gear back to the rental company and, in the interests of fairness, we went to the Brown Pub that evening. It didn't really have the same character as the Blue Pub and was aimed more at old men who liked to sit and watch horse-racing. Still, it was warm and had a fire so we could dry our soaked gloves. Our trip down south continued the next morning.
Posted by Rob at 6:47 PM