Williams is situated on the (in)famous Route 66, so it seemed daft not to take advantage of a touristy photo opp before we left, especially since the sign was just around the corner from the laundrette I'd dropped our clothes off at in the morning. 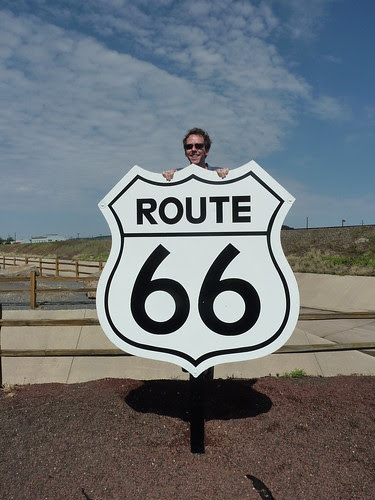 The day had a hazy heat which made the tarmac look like water, and the drive was long. We stopped off at Panda Express on the way, which we hadn't realised was a chain (our first experience had been in Vegas) and it felt ever-so-slightly more healthy than other fast food places. It helped break up the 6.5 hour drive somewhat (automatic cars encourage laziness and having so little to do on uninteresting roads is awful), but thanks to a borrowed audio jack from Paul and Fi and a selection of audiobooks on my MP3 player, we managed to keep our sanity without resorting to I-Spy.

Research had already shown us that LA accommodation was expensive. Since we'd been unsure where to stay - erring on the side of caution and keeping out of the ghettos costs a small fortune - I'd fired off some CouchSurfing requests, and at the last minute we got lucky and found Bill, a host who was willing to take us in for the night. He lived in Santa Monica with his 91 year old mother Mary-Jane and advised us to bring some chocolate as that would make us instant hits with her. He wasn't wrong! We got to their place in the early evening, and were immediately treated like family. MJ (as she was known) was hard of hearing but was still sharp as a tack, and able to hold her own. You didn't want to mess with her, or hold out on the chocolate for that matter. We had eschewed the god-awful cardboard that passes for chocolate under the banner of "Hershey's" in favour of good old English (well, it used to be) Cadbury. This was the right decision; it vanished within five minutes. They also have a very cute dog called Herby, who loves to cuddle up to you when you're on the couch. 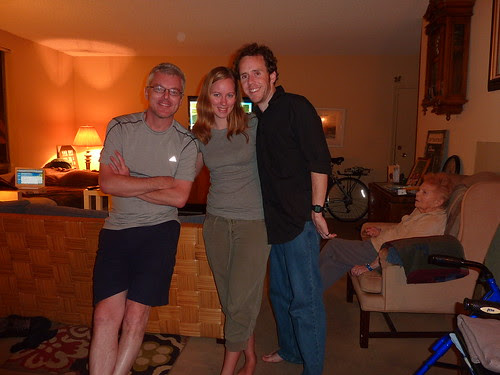 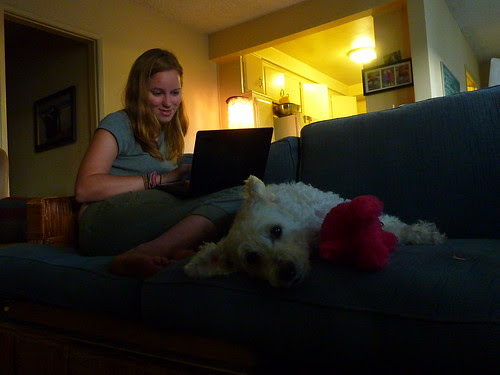 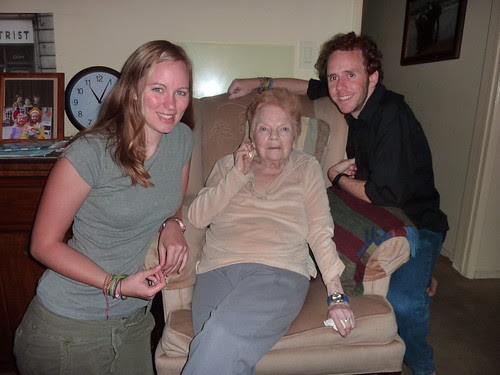 We were all hungry so Bill decided we should go out for pizza. Great idea! What we weren't expecting was his next suggestion of travelling to pick up the pizza on bikes. It is well known to those who know it well that I do not get on great with bikes. I managed, just about, in Kep, mainly because there were no cars on the road. Hell, there was only one road. Santa Monica - being a mere 20 minutes from LA - is somewhat different. There are cars, and lots of them. There are roads, and lots of them. In truth, this was the first time I'd ever been on a bike on a road with traffic and it was utterly terrifying. I decided to put a brave face on it and give it a go, and it didn't turn out too badly in the end. Gilly got the rough end of it; her bike was slightly bigger than mine and it was tougher for her to come to a halt...at a traffic light she ended up falling into the car to the side of her. The guy driving was startled but then relieved when he realised she wasn't a tramp trying to get into his car.

Pizza in hand, we biked back without further incident, and afterwards Bill decided to take us for a walk down to Santa Monica Pier. It's a testament to every permanent funfair you can think of, and has been featured in many TV shows and films. Night-time is definitely the best time to see it, lit up in all its garish glory. 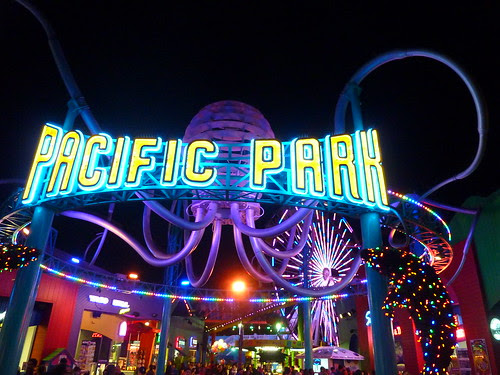 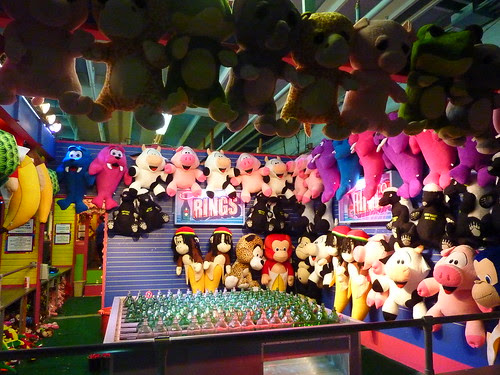 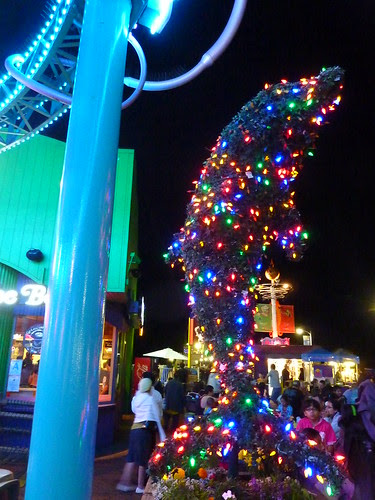 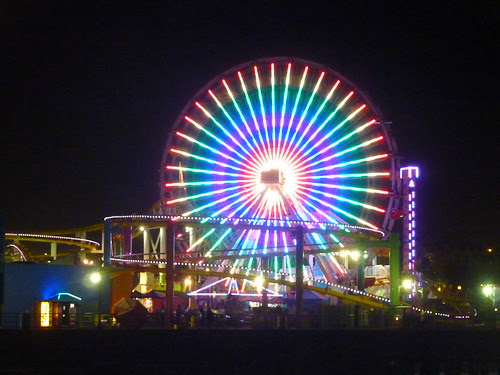 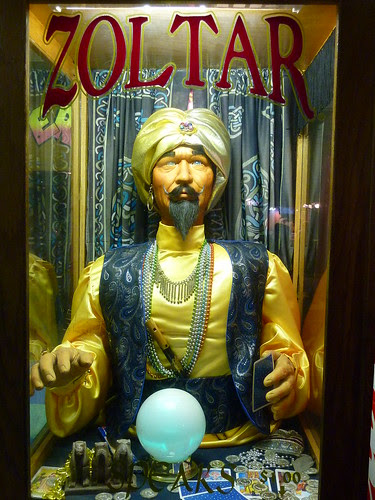 We strolled under the pier, and along the beach (miraculously, I managed not to get my shoes soaked - that award went to Bill on this occasion), before cutting back past the Fairmont Miramar Hotel. 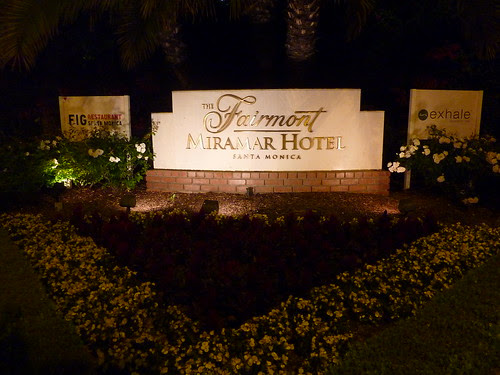 The hotel grounds are home to a magnificent Morton Bay fig tree from the late 1800s, which was declared an historic landmark in 1976. At 80 feet tall, it's also the second biggest in California: 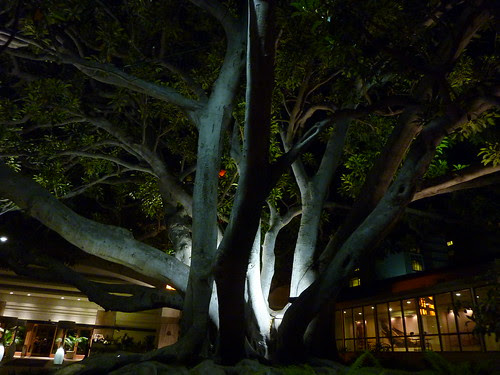 It was getting on for midnight, and we were all ready for sleep. We must have made a good impression on Bill: he was originally only going to be able to host us for 1 night, but kindly offered to let us stay for as long as we wanted! The generosity of CouchSurfing hosts has never been anything less than fantastic. Since we wanted to explore LA, we decided to take Bill up on his offer and use Santa Monica as a base for the next few days.
Posted by Rob at 10:30 PM