Our time in Valparaiso could mostly be described as "painful". We'd started feeling a little ropey a day or two before leaving Santago, and the sore throat Gilly was suffering from had properly kicked in with a vengeance on the morning we left our apartment; the hour and a half bus journey didn't do her any favours. I was feeling it too, but nowhere near as bad. A 2km walk to the hostel compounded matters, especially since Valparaiso was built on not one, but 42 hills. There are funicular trains dotted around which you can make use of for the cracking price of 10 pence, so we availed ourselves of the one closest to Hostel Escarabajo, then walked the remaining way uphill. The hostel itself was nice enough, at least in terms of social area space, but the six bed dorm we were in only had one locker. Security is a must in hostels - almost every theft I've heard about has been inflicted by travelers on other travelers. It's hard not to be paranoid when you're leaving valuable electronics lying around. Regardless, no-one was using it, so I dumped our stuff in it and then we set out for some food. 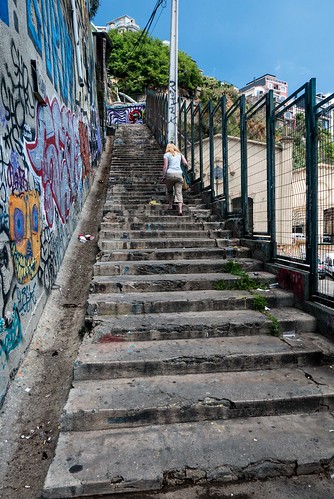 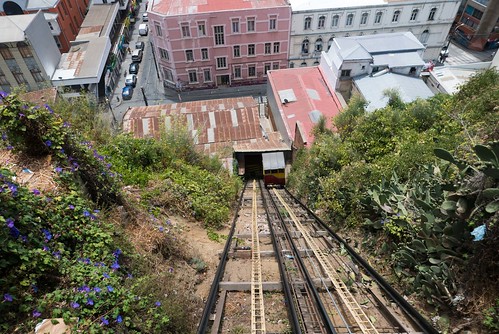 Valparaiso is a hotchpotch of grime and colour, with more stray dogs than I've seen in a single location. Graffiti mingles with genuinely good street art, whilst more stray dogs than I've seen in one place (and their "offerings") litter the streets, along with locals whose sole purpose, at least in our area, is to sell you weed. After stumbling upon a random festival performance, and trying to track down a restaurant we had found on Tripadvisor and failing (it looked to have closed down - top tip: always check the last review submission date), we walked back to a restaurant literally two doors down from our hostel called Hotzenplotz. This is a German joint run by an effusive and enthusiastic young lady, serving craft beer and a brief menu of four main courses which are all cooked to order. We both chose the chorizo with potatoes, which were filling and tasty. Vegetables are something of a mystery in this continent, but from what we've heard Bolivia is going to be far worse so we're enjoying the food whilst we can. 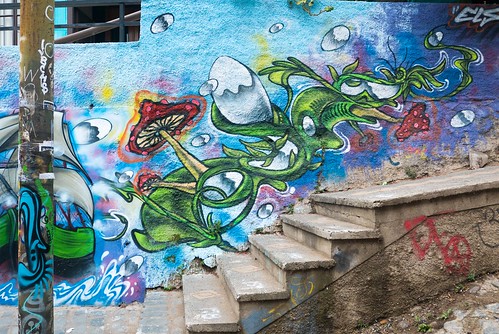 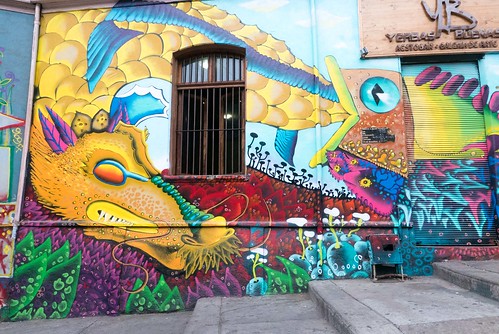 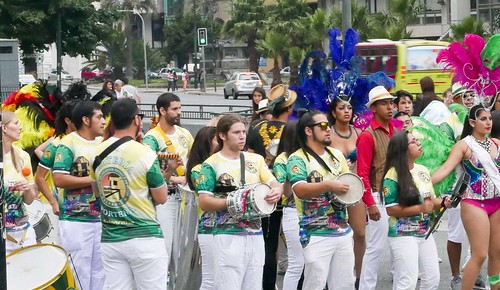 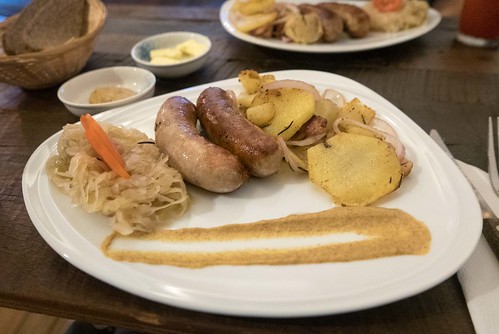 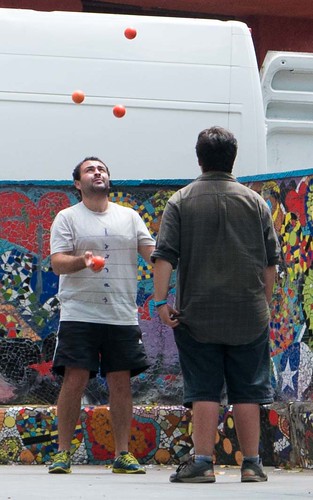 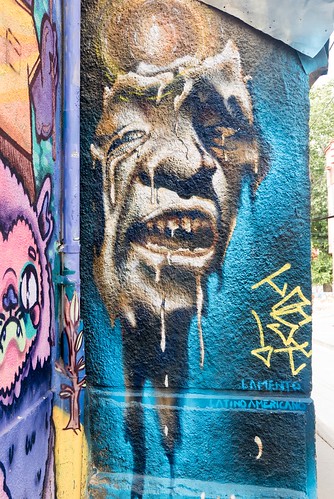 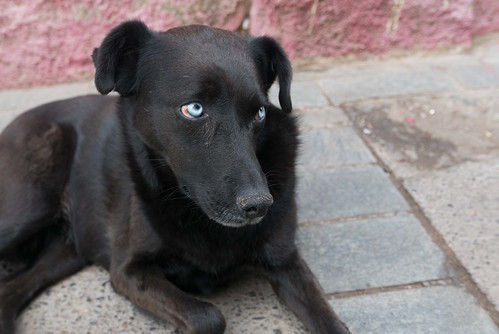 Gilly was feeling really run down the next day and I was starting to feel the same, so we decided to head to a local clinic. After less than a half hour wait, we emerged with a diagnosis of tonsillitis, a prescription for penicillin and super strength ibuprofen, and £100 less in our pocket. Thank goodness for the excess waiver on our insurance... The most Gilly could manage to eat was ice cream, and though I wasn't feeling hugely hungry, I still managed to get through a set lunch at Cafe del Pintor late in the day, before we both headed back and spent the evening resting. I found another hostel with a private room for 500 pesos more per night which was a no-brainer, so the next morning we jumped in a cab to move to Hostal Color, literally two doors down from where I'd eaten the previous day. The cab was needed...I was feeling truly awful, and seemed to be a couple of days behind Gilly in terms of the illness; thankfully she was starting to recover. Our new accommodation was just what we needed, a quiet courtyard with just three private double rooms. We went for breakfast at El Desayunador where I managed to force down some eggs and toast, and in the afternoon we joined a free walking tour around the town. 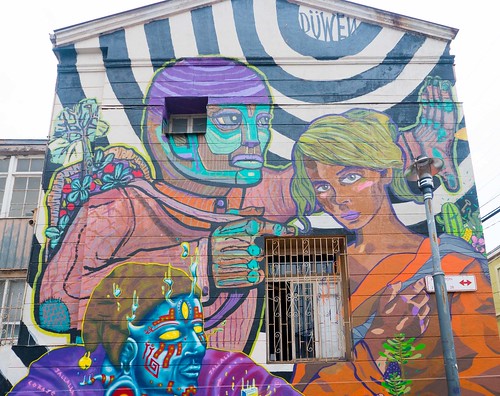 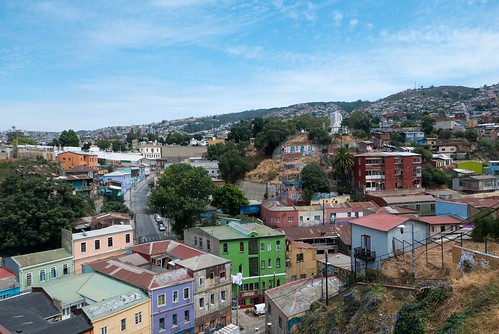 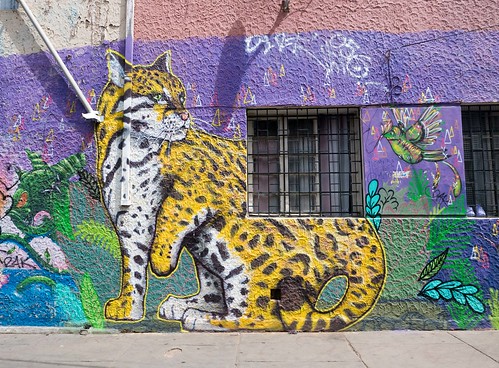 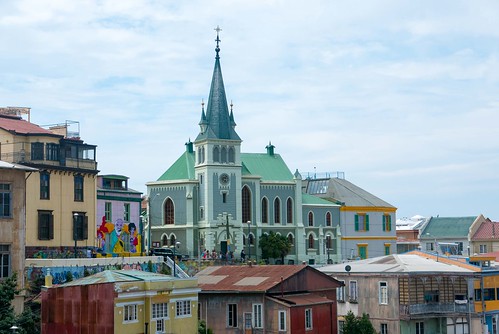 For some reason, Queen Victoria is very popular here, despite there being no historical connection between the monarch and the town. The locals just liked the name, so there's a funicular bearing it, as well as numerous roads and other amenities. Valpo (as it's shortened to) has UNESCO heritage status which is something of a mixed blessing. It's great for tourism, but many of the houses in need of repair are unlikely to be fixed since they will need to be restored to the exact same style as they were before the heritage status was granted and the cost of this is beyond the means of many. Graffiti is another issue. There are hundreds of murals found throughout the winding streets and narrow passages, but it was actually illegal to create them despite their obvious tourism draw. Government crackdowns didn't solve the problem, so instead they took a different approach and redefined what graffiti actually meant - tagging and other crude graffiti is still illegal, but now you can actually get grants to help create new murals if you apply for them. Among the murals are various "street saints" which people beseech favours from; one lady used to provide medicinal mushrooms to the populace for various ailments, the effects of which you can probably imagine. Another street saint was a serial killer, who is still very popular with the criminal underworld - his grave is filled with thank you plaques from grateful lowlifes who have had their wishes granted. The guide had acquired a dog - Rocko - which followed him around everyday, despite his best efforts. The dog had learned the tour route by heart, and was always waiting outside an empanada shop for him to go past. He was a bit crazy; he didn't attack anyone, but he was the alpha in his pack and was always happy to have a go at other dogs if they got too close. He may have bitten off a little too much when he cornered a cat in a doorway though. Fortunately the cat's owner chased Rocko off before he got his snout slashed. 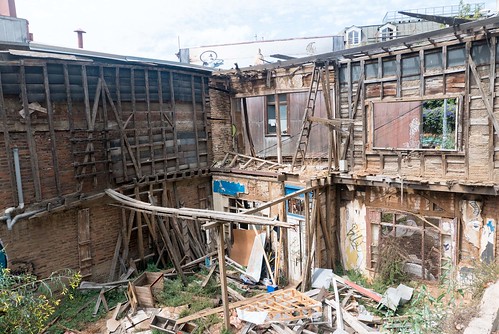 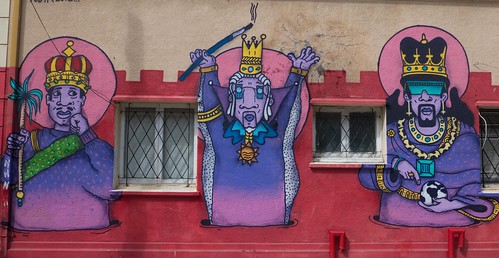 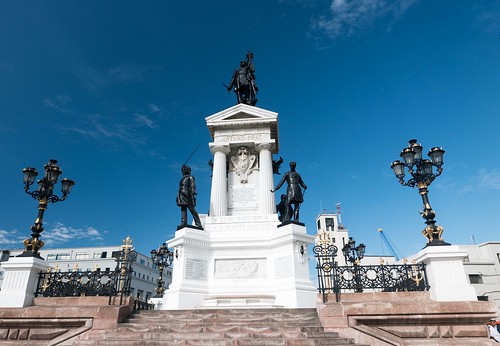 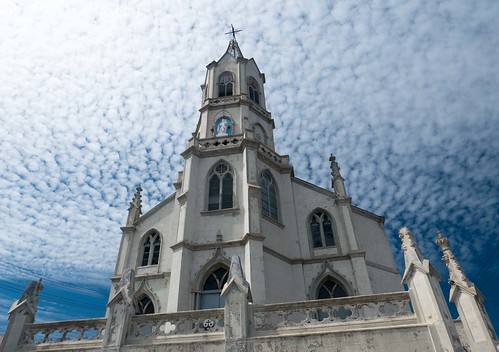 The three hours took their toll on me, so we had a rest in our room and then went out to El Horno de Chile and shared a plate of pork and spicy mash. Even if we weren't ill, the dish would have been way too much for one person; we're still getting to grips with huge south America portions! For our final day in Valpo we went to La Sebastiana, another of Pablo Neruda's houses. En route, we stopped at a fantastic macaron place, which was basically a French guy selling them out of his back yard. Probably the best macarons I've ever eaten, and they served as the breakfast of champions until we reached the house. Unlike La Chascona, we were able to wander around this one freely, although the audioguide still directs you between the floors. This house spans five storeys and like the other, contains knick knacks Neruda collected from around the world. It was a lot more compact than his Santiago property, but his love of the sea, drinking and entertaining were all visible. The name came from the previous owner, who died midway through the house's construction, and for whom Neruda named the house as a tribute. 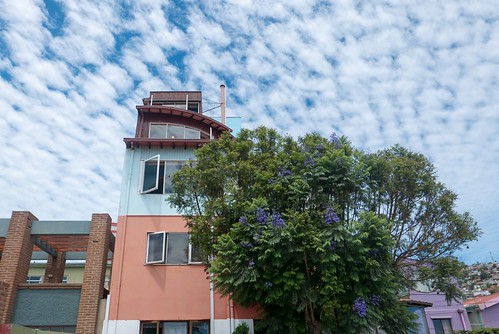 A walk back to town took us to Kaiku for a passable sushi lunch, followed by gelato from Emporio La Rosa which we were overjoyed to see had a branch in Valpo after stumbling upon it in Santiago. My throat was in need of coldness: a cursory inspection that morning had revealed that the right side of it was riddled with ulcers which explained why eating anything was agony. Lovely stuff. Drinks weren't so much of an issue though, so a craft beer at Casa Cerveceria Altamira and a couple of hands of cribbage followed by our first "proper" Thai meal in the trip at the excellent Samsara was a great end to our stay in Valpo.

Since we were in the area, we decided to spend a day in Viña del Mar, a nearby beach town. Hostels were super expensive so we opted for a second AirBnB stay, this time in an impressive looking property named El Chateau. We got there at 11am, only to find the owner wasn't there. Not a great start. Fortunately there was a cute café-library around the corner, so we spent an hour reading, drinking herbal tea and munching on amazing passion fruit meringue. At midday our host finally arrived, a wheezing old guy named Carlos who looked as though he might keel over at any moment. We were offered a twin room in the main house or a private annex with en suite which we went for. Despite appearances, the place wasn't in great condition. The bed was very comfortable but the electrics were dodgy (shock off the light bathroom light switch, anyone?) there was damp everywhere, and the whole accommodation was in dire need of renovation. Carlos was one of three brothers looking after the place (we'd booked with Alejandro), and despite not speaking a word of English, he did his best to make us feel comfortable. 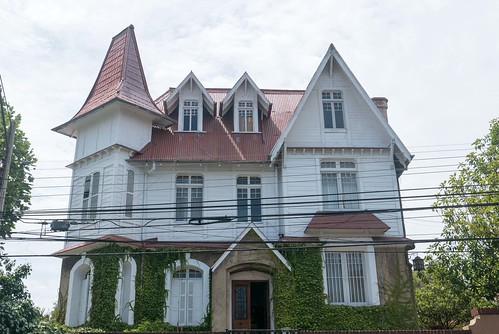 A little disappointed, we walked into town where I picked up a new beard trimmer at a very good price in an Argos-style store, and then strolled along the waterfront, starting at Wulff Castle (which was closed for renovations), ate empanadas in the grounds of the town's casino, and then walked a considerable distance up to the beach. The sea was really rough, and waves were breaching the sea wall regularly so we stayed our distance and found a park to sit in and read for the afternoon. There's a trend in Chile of performers waiting until traffic lights turn red before jumping in front of cars and doing whatever they are good at - be it juggling fire, breakdancing, performing with puppets or body-popping. It certainly makes the wait for a green light go a bit faster, but from what we saw it didn't seem particularly profitable. 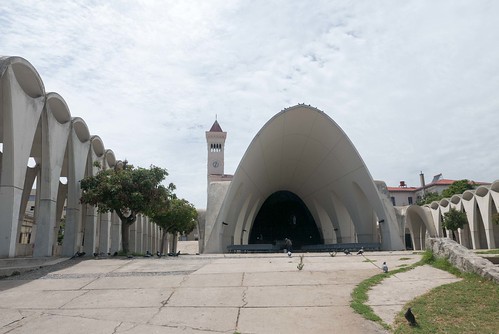 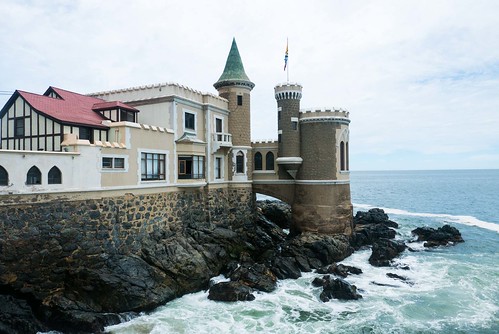 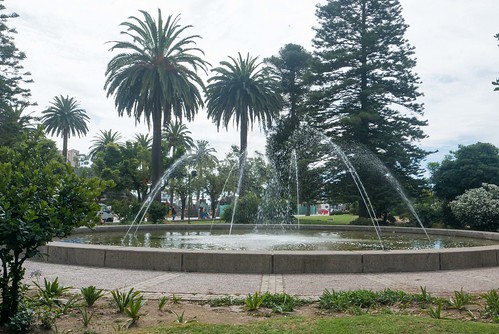 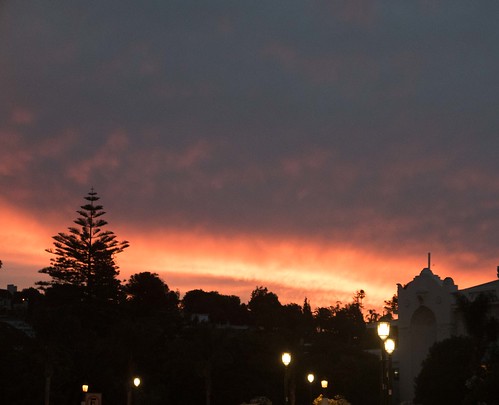 Gilly took us to a pizza place called San Romano for more thin crust action and we decided that we'd seen everything we needed to in Viña. It didn't have the rough charm of Valpo, it just felt like a slightly sterile beach resort so we planned to head to La Serena further north the following day. Ideally we wanted to go to Vicuña to check out the pisco distilleries there, but La Serena looked like it had a good vibe and Vicuña was pretty close anyway, so I booked us into a hostel for a couple of nights while we planned our next leg.
Posted by Rob Kershaw at 10:00 PM