In true South American style, after boarding our bus at 7am outside Loki, we spent an hour driving around the city picking up people until we realised that, an hour later, we were around the corner from our hostel again. We didn't actually get out of La Paz until almost an hour and a half after checking out, impressive even by Bolivia's timekeeping standards. Copacabana was only a couple of hours away, and when we arrived at lunchtime I was pleasantly surprised; I'd been expecting a bit of a dump, perhaps not reaching our current low of Uyuni, but certainly not anything to like. In truth, it's a hugely tourist-oriented town, but it is relatively clean, and has a selection of decent hostels and hotels. We'd been recommended La Cúpula by Caz as a good restaurant but it also doubled as a hotel, and after seeing the plentiful hammocks, garden with four alpacas, and a decent double room, we decided to stay. Famished, we found a sandwich joint in town for a choripan accompanied by reggae music (yay...), before heading back to do some photo processing from the comfort of a hammock. 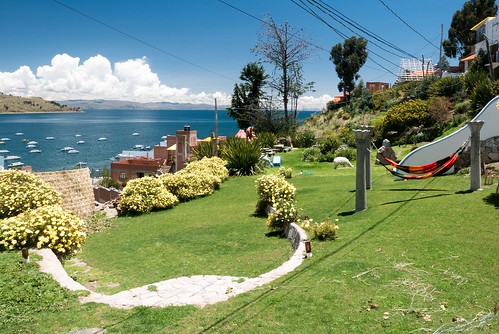 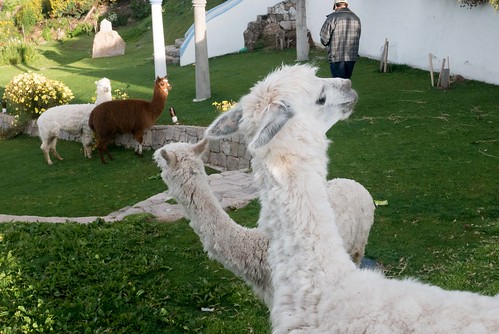 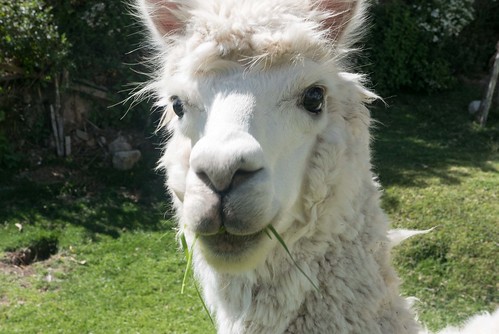 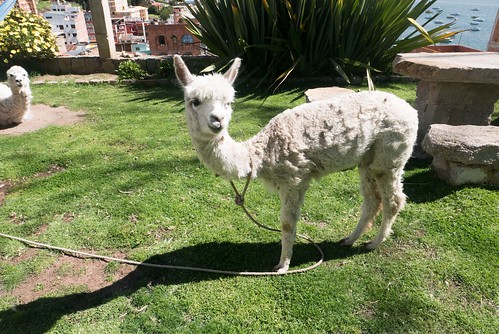 It didn't last long. I have no idea how it happened, but at some point in the previous couple of days I must have eaten something dodgy. My stomach felt awful, I felt dizzy, and despite the heat I was shaking with cold. I crawled into bed to try and sleep it off, but then got hit by the runs. This continued for the rest of the evening, and when Gilly started being sick it became apparent that we'd both been affected. Since she didn't have a fever or feel quite as bad, our best guess of the cause was the half cold empanada I'd eaten at the market in La Paz during the walking tour, of which she'd taken a couple of bites. There was no chance of us keeping anything down that evening, and we weren't going to be in any state to walk across Isla Del Sol the following day, so I booked us in for another night.

We were feeling a little better after breakfast at the hostel, so we had a walk around town. It's quite a small place but has a huge and ornate church which I found more interesting on the outside. We sent off some postcards and booked a bus ticket to Arequipa for a couple of days hence. The rest of the day was spent taking things easy as our stomachs recovered. Caz had recommended dinner in the restaurant attached to the hostel which we took a punt on; my fried fish was a little dry but Gilly's steamed trout had much more flavour.

We weren't sure if we'd be OK for a trip to Isla del Sol the next morning, but it seemed like we were back to normal after breakfast so we packed a small overnight bag and went down to the dock. The boats leave at 8:30 each morning and the journey takes two hours to Challapampa, which was plenty of time for us to swap Galapagos tips for Chile info with another English couple on board. The island itself is lovely, with crystal clear water on the beaches of the north There are also a number of Incan ruins including the Inca table which was allegedly used for human sacrifices, and a series of building shells which were surprisingly easy to get lost in. It's highly recommended to hike from the north to the south for a number of reasons: firstly, the sun is at your back rather than hitting you full in the face; secondly, the walk itself is slightly easier since the initial incline for the first hour in the opposite direction is crazy steep; finally, there is far more choice of accommodation in the southern part, which is ideal if you plan to stay (we did). 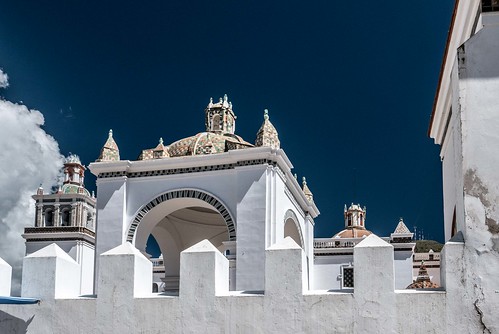 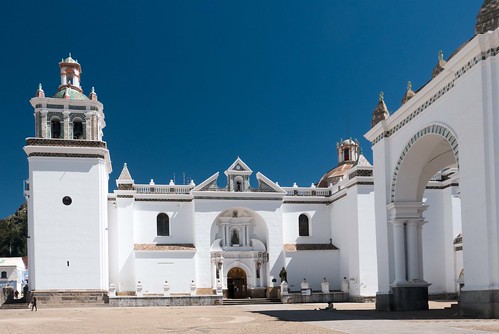 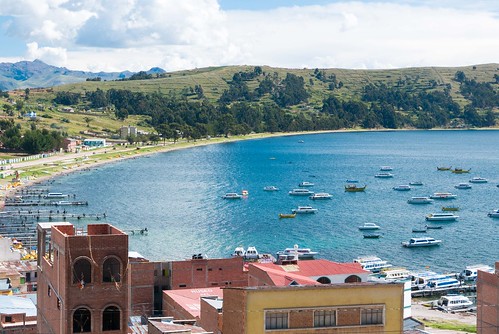 The hike was about 11km including the walk around the ruins, and you pass through a couple of communities en route which have border posts (smiley women sat on chairs) who you need to pay to proceed. The entire cost from north to south is only three quid. The hike felt long, mainly due to the heat and the endless path winding its way up and down the hills, and we were glad to only have our small bags. 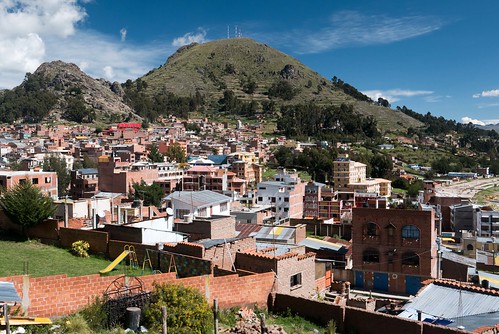 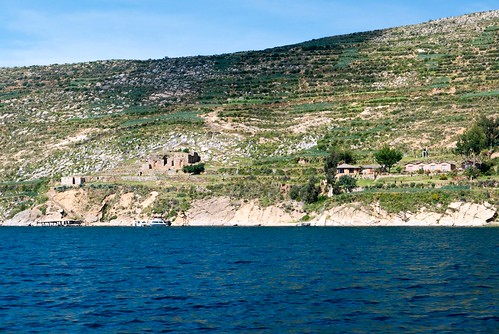 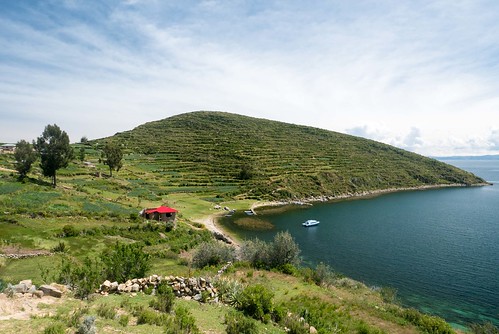 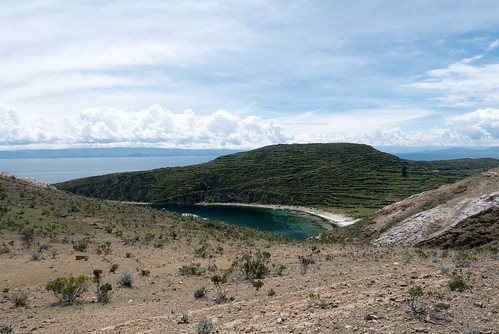 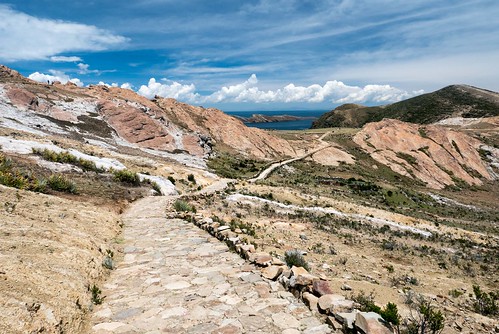 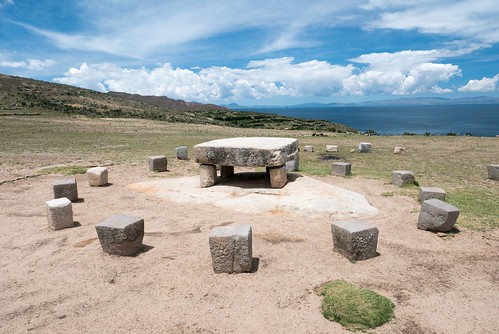 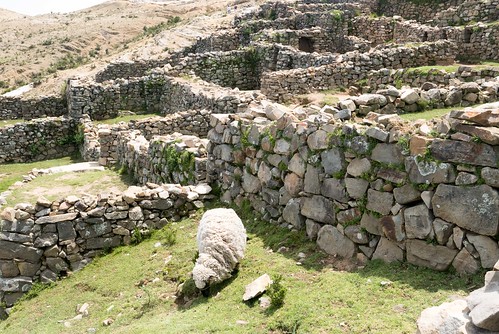 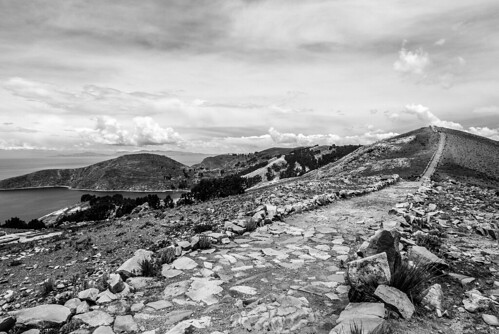 When we finally arrived at Yumani in mid-afternoon we were very much ready to dump our stuff. First we had to find our hostel which was tougher than you'd think given the size of the community. Thankfully a local saw our confused faces and took pity on us, pointing us in the right direction. Our room in Inti Wayra was wonderful, giving us a 180-degree view over Titicaca as well as a welcome hot shower in the en suite. After a chat with the owner where I understood perhaps 40% of what he was saying at most, we walked down to the Temple of the Sun, another 4km round trip. It was an old Inca temple with a face carved into the centre of one of the rooms, and was also a stop for many of the tour boats that come to the island. Something that we've found hilarious on this trip is the proliferation of selfie sticks. It seems that no matter where you go, there's always one girl in full make up, usually South American, who wanders around a site, flicking her hair and taking photos of herself next to things. Not necessarily interesting things either: a wall, a flag, a flowerpot...whatever is close by. It's all about getting the perfect portrait for Facebook. I personally feel awkward enough having to grin until my face cramps during group photos; I'm not sure how anyone can make an entire trip out of it. Also, selfie sticks in general are one of the worst inventions of this decade and should all be rounded up and launched into the sun, no exceptions. 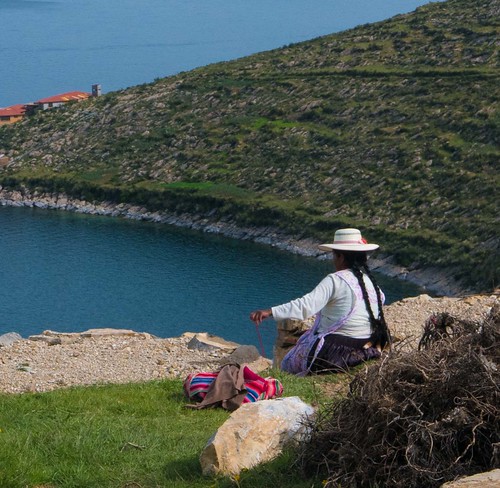 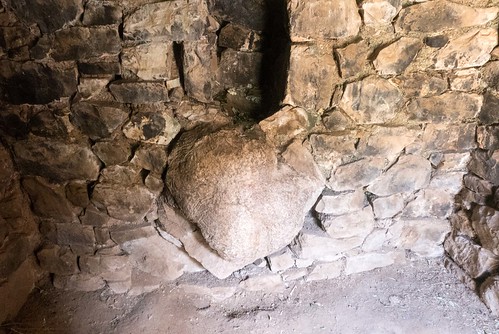 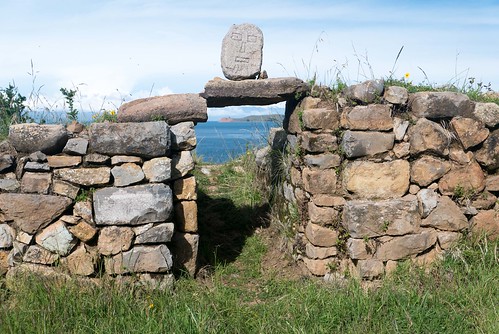 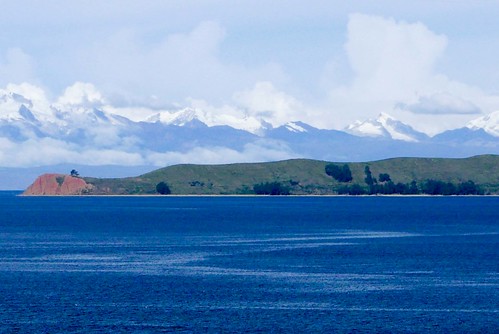 After hiking back it was dinner time so I took us up to Las Velas, a restaurant in the middle of a forest where the husband and wife team who are self-proclaimed gourmet chefs cooked us trout (the speciality of Copacabana and its surroundings) and pizza without any electricity. The lack of power certainly added to the ambience as we played cards by candlelight, and the food took over an hour to arrive (we'd been prepared for this), so we popped outside to take photos of the stunning sunset as we waited. Coincidentally while we were waiting for food, Remy from Israel who we'd met in La Paz and Rurrenabaque came into the restaurant. Incredible that even in the most random and remote places you still run into the same people. The meals were nice enough but not really the culinary sensation I'd been led to believe we were going to be served. Still, it was a unique experience and well worth visiting. Afterwards, the husband brought out a guestbook for us to sign, filled with hundreds of comments from people all over the world waxing lyrical about the food. He wore a big pointy hat which is apparently traditional in that community, making him look a bit like a Bolivian Santa. 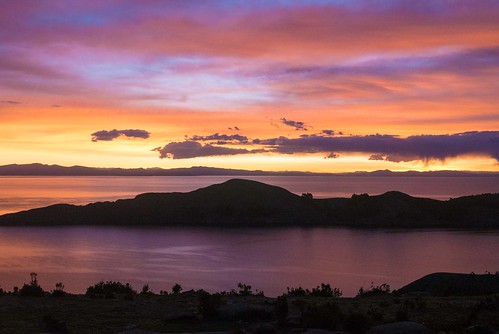 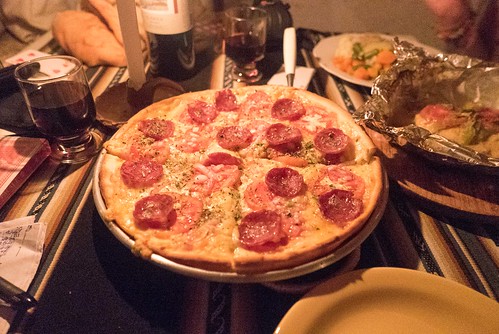 Another early night was needed as we had to get the 8am boat back from the south, so after a breakfast of muesli and pancakes and a stunning sunrise we were back in Copacabana by mid-morning. We caught up with Ash and Rhys for lunch; Rhys had been pretty ill himself for a couple of days but was on the mend. They were heading to Puno for a day or so to break up the journey to Cusco, so after a round of burgers we went our separate ways and arranged to meet in Cusco when we got there. 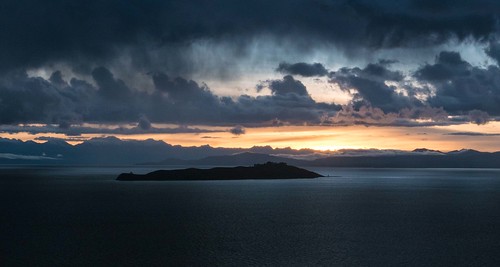 Firstly though, we were going to Arequipa. It was the end of our time in Bolivia, having stayed a little longer than anticipated thanks to the fun and games we had in Rurrenabaque. The border crossing was possibly the easiest we'd had to date despite horror stories of officials trying to extort money from tourists for random administration issues. Our bags weren't given a first look, let alone a second, which was bizarre. The journey was a little more stressful though, since we had to get a connecting bus to Arequipa from Puno. It looked like we were going to get in late but it turned out that all the bus times we'd been given by the tourist office we'd bought the tickets from were wrong (as were the actual buses which were nothing like the air-conditioned luxury beasts we'd been promised).

We made the connection, and got a taxi from the bus station to El Albergue Español Backpackers which would have been fine but for the fact that we only had two 50 soles notes (the equivalent of ten quid each) and the driver had no change for our ten soles journey. Literally, zero change. I'm not sure what other passengers paid him in - guinea pigs, perhaps? To make things worse, the hostel had no change either. We were starting to have visions of being stuck in a country where we couldn't actually pay for anything because we were carrying more money than the entire populace could handle. The fun didn't stop there: in desperation I went to two separate cash machines to try and get some lower denomination bills out...neither of them worked. The taxi driver was still waiting, and it looked like we were at an impasse until a couple of other girls at the hostel kindly stepped in to give us ten soles and arranged with the hostel to just deduct it from their bill and add it to ours. A sensible solution to a crazy situation, and we could at last go to sleep in our double room which cost the grand sum of £6.50 for the night. Welcome to Peru.
Posted by Rob Kershaw at 1:53 AM