I was feeling a little delicate in the morning, mainly due to lack of sleep, so I decided to skip the early morning trip to Tagus Cove. Gilly went along to take a look at Darwin's Lake, but otherwise there wasn't much of note to see and I was more than happy to have an extra couple of hours in bed. Still, for the sake of completeness, here are a few photos Gilly took. 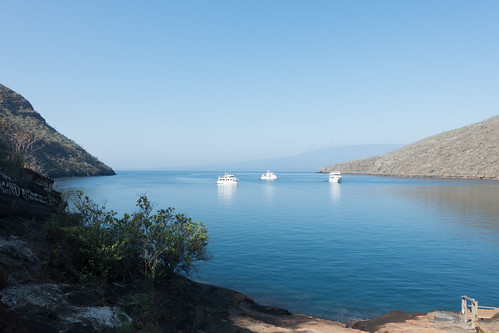 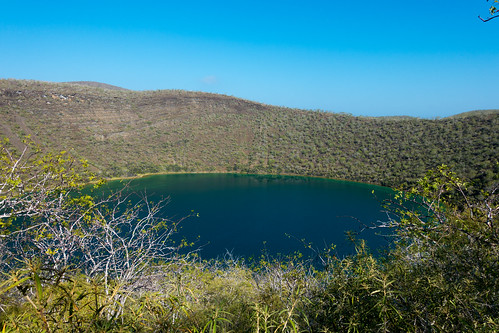 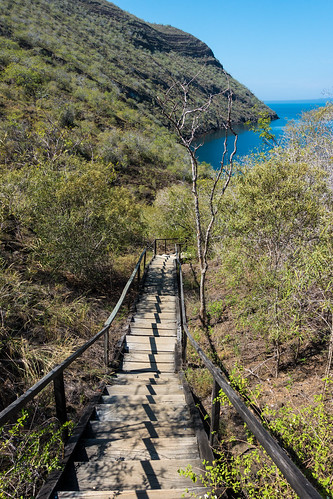 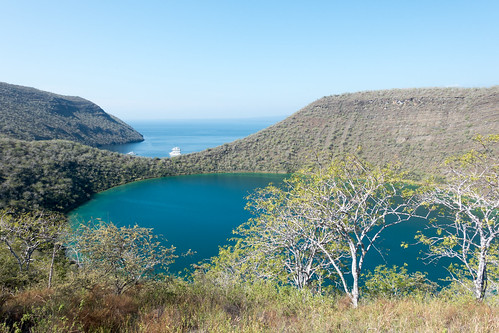 After waking up properly and once everyone else was back, we took a zodiac over to Fernandina Island proper. This is where you can find the most marine iguanas in Galapagos - out of the 250,000 residents scattered over the islands, there are over 100,000 on Fernandina. They were everywhere, and unfortunately so were some which hadn't survived. El Niño may be great for humans in terms of weather conditions, but it has also messed up the food chain with far less food being available to a lot of species. Whilst many of the iguanas we saw were in a healthy condition, some of them looked seriously malnourished. 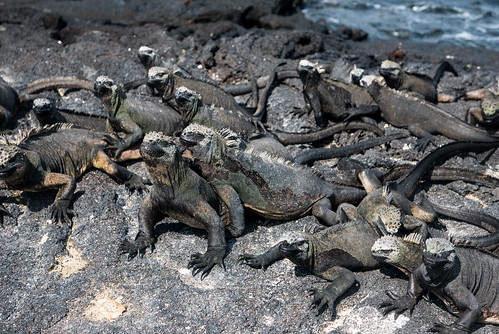 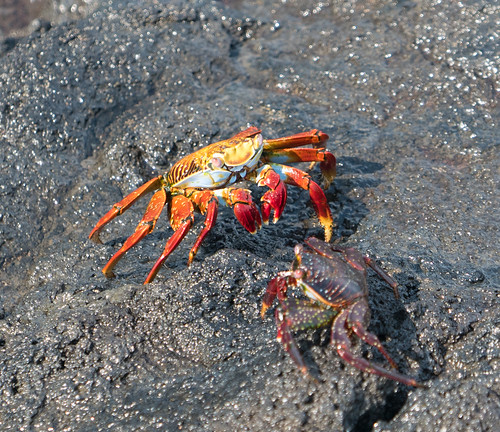 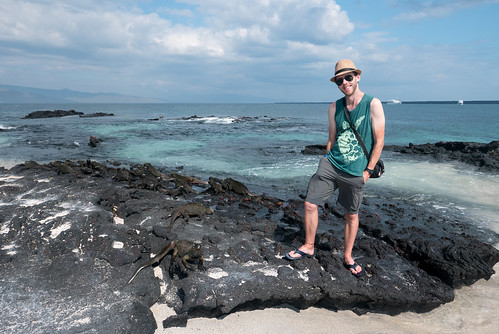 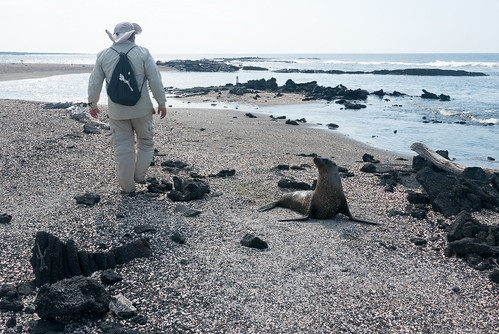 Compared to land iguanas which are very territorial, marine iguanas are far more social and happily hang about in huge groups. This is mainly for warmth, since during mating season they become as territorial as their land counterparts. They will face the sun when they need to reach their optimal temperature of 38.5 degrees, and face the breeze whenever they need to cool off. Their smiling faces in the sun are hilarious, almost smug. Also on the island is the Galapagos hawk, which has no predators. They prefer live meat to carrion and can be pretty nasty to baby sea lions, since they usually peck our their eyes first. I guess they must be the tastiest part. 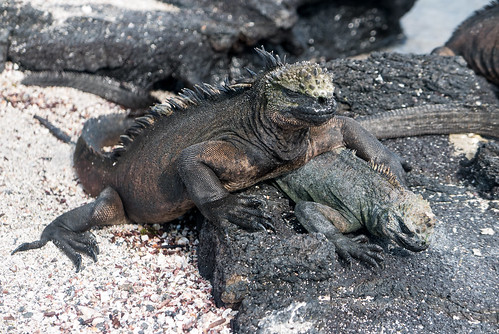 Interestingly, the behaviour of species differs between different islands. For instance, the lava lizard is a cannibal, but only on Espanola and Genovesa islands. Johan's knowledge and passion for his job is incredible, far, far better than our experience with Sarah, who seemed like she was just going through the motions and treated any question like a chore. 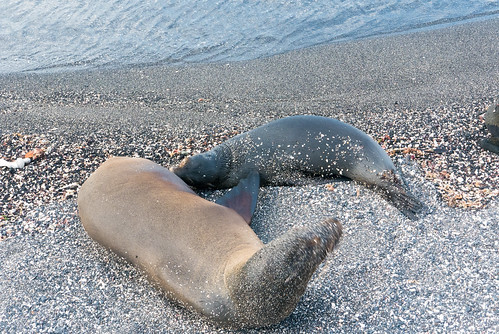 We had three snorkel trips that day. The first was a little colder than we'd been used to previously, but Johan told us that he usually saw loads of turtles - his record was 85. We didn't see anywhere near that, but eight turtles is still far more than we'd seen in one place before. The second dive has been blocked from my memory since the water temperature was insane. I've never been as cold in the water as I was then, and the thermocline which brought the occasional five-second warm current only served to accentuate the "normal" cold state of the Pacific in that area. Consequently I wasn't looking forward to the optional third snorkel trip after lunch, but I decided to give it a go anyway and it was the best decision I could have made. Not only was the water much warmer, but in terms of spotting "big stuff" as divers call it, it was like seeing the Galapagos' Greatest Hits. 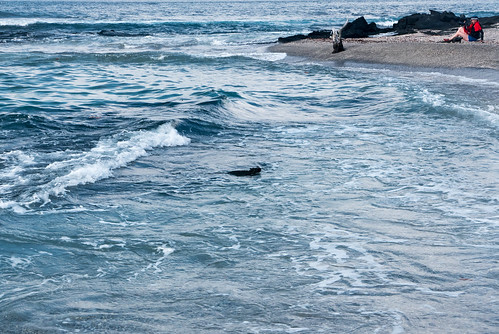 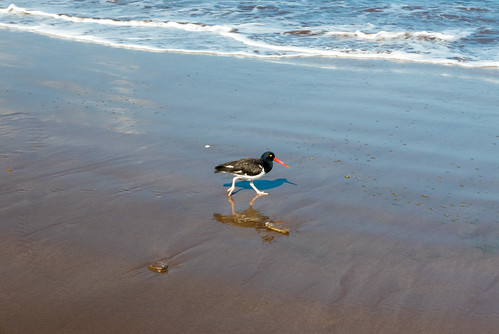 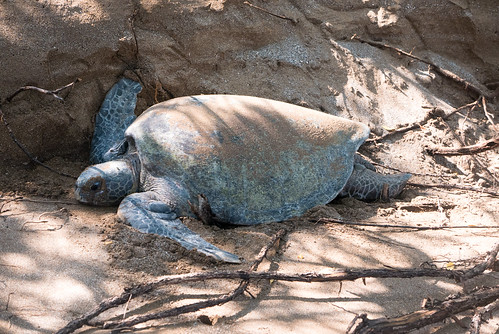 First, Craig spotted a marine iguana swimming towards us so we followed him for a bit (only males go fishing in the water). Then we saw a turtle flapping about a bit. Then we swam a bit more and saw a huge spotted eagle ray followed by a smaller stingray. If that wasn't enough, we then stumbled upon the two biggest sea turtles I've ever seen, happily feeding on the reef. They were probably 2/3 of my size at least, and I'd be surprised if they weighed less than 100kg each. Their heads alone were bigger than two balled fists. Further out to sea, I saw a weird stocky silver fish, with spines on its back and two huge bug eyes stuck to the side of its head; I need to confirm but I think it may have been a batfish. Finally, to top off a fantastic 40 minutes in the water we heard a bark behind us and a sealion swam under us, stopping briefly to turn its head and look at us. Absolutely stunning. We went to sleep very early and very happy that night.

It was an early night because it was an early start. We were going to Bucaneer Cove at 6:15am to try and get a glimpse of more hammerheads. I was expecting cold water again given the time of day, but it was surprisingly tepid. Unfortunately we didn't have much success finding the sharks, other than three white-tips and a sea lion who swam above one of them. The snorkel was our last chance to see hammerheads on this cruise so it was disappointing that we didn't have more luck, but we still had a few days left when we returned to Santa Cruz to possibly catch a few sightings during some dive trips. This was our last full day on the boat, and it was a lazy one which suited me after a packed itinerary over the last week. 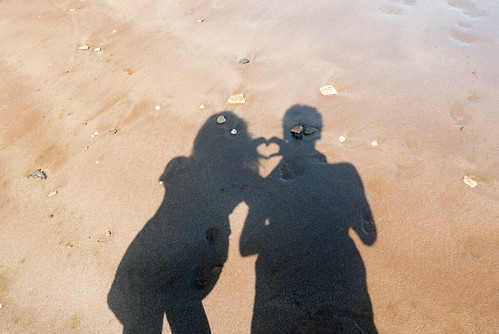 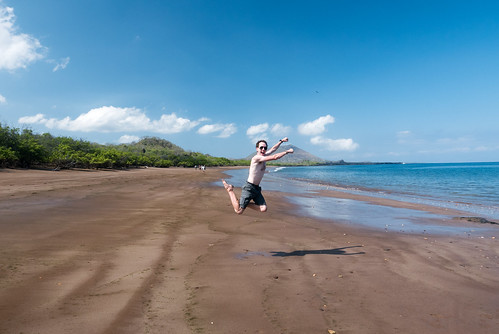 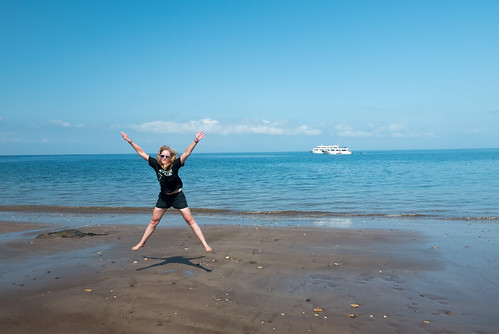 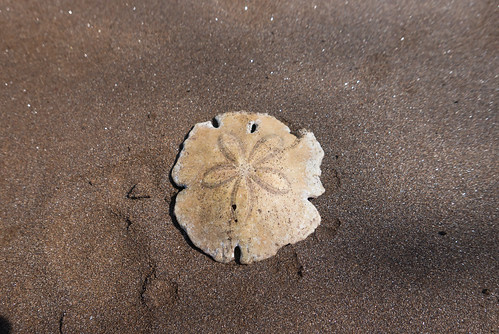 We took a trip over to Espumilla beach and had a wander around to see very little other than mosquitoes, before actually having a bit of beach time to read a book. Compared to our previous travel, I've done very little reading on this trip. The effort involved in processing photos and maintaining a blog really saps what little reading time you have left over, especially if you're constantly socialising with other travellers. I did manage to make a bit of headway on my blog backlog after the beach, since we were travelling to Isla Rabida and had a couple of spare hours. I took a break on a couple of occasions though, firstly when we spotted a couple of huge manta rays swimming by - one of whom waved at us - and secondly when a pod of bottlenose dolphins decided to join the boat for a couple of minutes; two very special experiences. 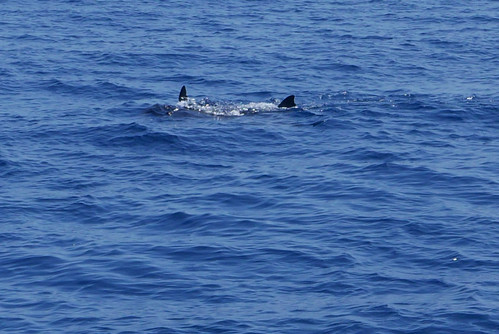 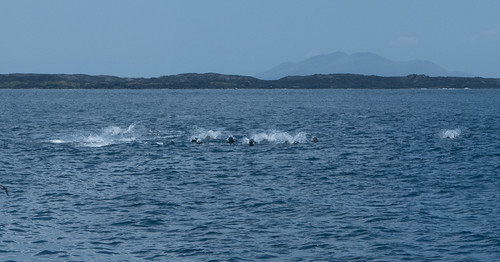 We went to Rabida after lunch. The beach was the colour of iron, mainly because of all of the iron deposits on the island. It was also exceptionally hot. Johan was very excited because in the lagoon four flamingoes had taken up residence - the first time he'd seen them there in his seven years as a guide. The water had previously been too warm and had killed most of the shrimp that the flamingoes feed on, causing them to move on. Now there was hope that they may start breeding here again; a genuine success story. It was also a good island for me - on our last snorkel from the beach, I finally managed to have a sea lion come and play around me! It was magical - and here's the video. 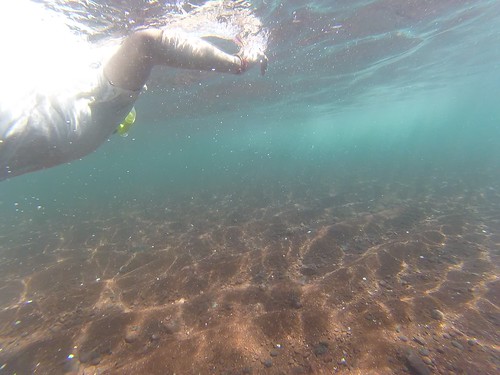 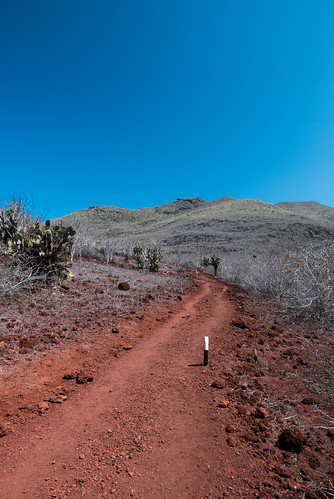 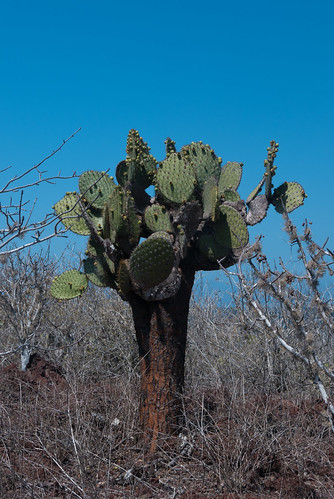 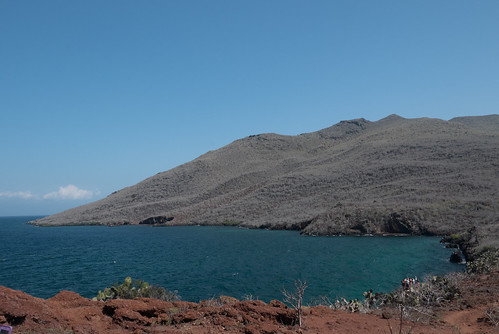 The rest of the snorkel session was forgettable - the visibility was abysmal and the current was far too strong for swimming in. In the evening we had another cake baked by the wizardry of chef Eugenio, whose food is apparently so good that fishermen eschew trading their catch with the more expensive boats and apparently come straight to the Guantanamera to exchange goods. I can see why. 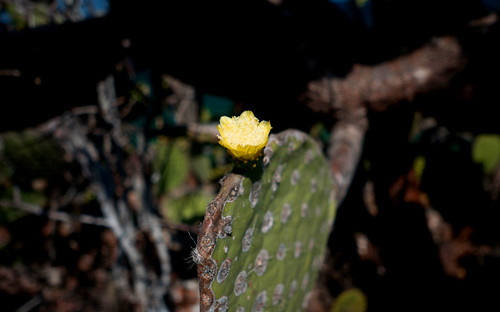 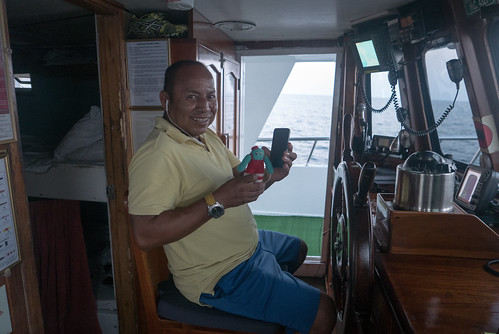 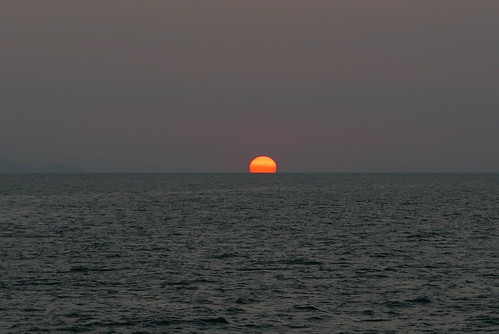 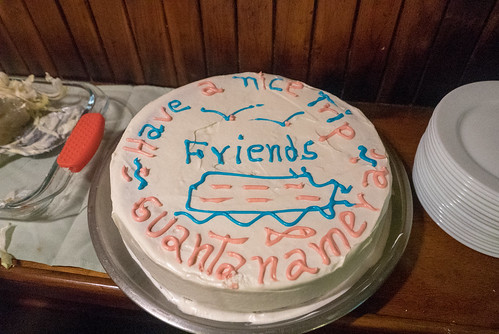 Johan wrote an extensive list of everything we had seen over the course of the trip. Partly to reinforce the diversity of the Galapagos' impressive wildlife and partly, I think, to reassure us that we'd got our money's worth. We exchanged details with everyone, packed up our belongings which had exploded all over our small cabin over the course of 8 days, and got ready to leave the following morning.
Posted by Rob Kershaw at 4:39 PM