Kep was quiet. No, scratch that. Kep made Phonsavan look like Vegas. It's the first place I'd visited where I felt comfortable enough to hire bicycles to ride around when Gilly suggested it. There is practically no traffic in Kep. Aside from a few people on scooters, and about ten tuk-tuk drivers servicing the entire town, the roads are dead. This is ideal for me.

Let me explain something: I have an irrational fear of riding bicycles. It may stem from not being brought up with a bike (I was never allowed one as a kid - "they're too dangerous!") and I didn't really need one. My hometown wasn't exactly huge, and you could walk anywhere in about 10 minutes.  I learned to ride my cousin's bike in Canada, aged 11. This was the extent of my bike-riding experience, unless you count the ill-fated time I went out for an 8-mile bike ride with Rick in Swindon and could barely walk afterwards; an adventure I still only refer to today as "That bike ride". To say I'm not confident on a bike is an understatement. You could take a glistening newborn foal, tape its front hooves to a bike's handlebars and give it a push, and it would still do a better job at riding than me.

So Kep was the perfect opportunity to get reacquainted with the two-wheeled terrors. 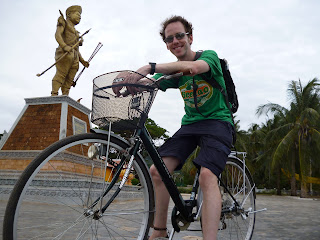 You may be expecting a horror story of me falling off and getting my foot run over by a tuk-tuk as I laid sprawled in the road. You would be disappointed: I managed to go the whole day without a single incident. It was touch and go at times, especially on the ride back to the guesthouse after dinner, when the roads were pretty dark and we were hurtling down a hill at a good 15-20km/hr. One errant pothole, and it may have been another story. It was exhilarating though, and I can see why people enjoy cycling so much.
Kep itself is a small collection of guesthouses and restaurants. That's pretty much it, aside from some odd statues dotted about, including a naked white lady, a huge crab, and two golden things which the locals apparently describe as "golden over-sized chickens". I'll let you decide if that's accurate. 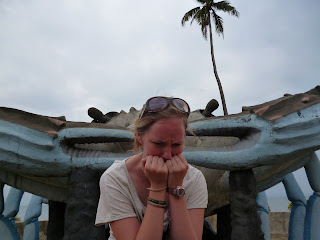 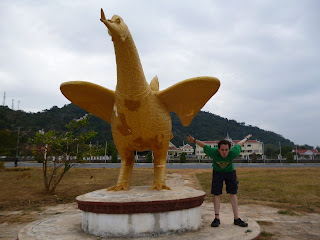 We were staying in a fairly new guesthouse: Visal Sak. It was so new, they hadn't hooked up the hot water yet, so we experienced our first cold shower room since leaving England. Given the humidity, it was actually pretty nice but not something I'd want to make a habit of.

Crab is the flavour du jour in Kep. If you come here, you must eat crab. It's what they do. It's like going to New York and not eating a pizza. I was expecting big things on the crab front, and was not disappointed. For lunch the first day, we shared a large plate of crab fried rice at Kimly. Marvellous. In the evening, I opted for something a bit different with a local chicken dish at Breezes which was pretty tasty, but spoiled somewhat by a huge hair in among the meat.

The next day we did what most people who come to Kep do (other than eat crab): visit Rabbit Island. This is a short boat journey over to an island which has a fairly decent beach, a number of beach restaurants, and not much else. The water is quite clear and shallow and while there's snorkelling to be done, there's unlikely to be much to see. We met an American-German girl called Roxanne, and decided to do a circuit of the entire island. This took the best part of two and a half hours, and we got slightly lost cutting through the jungle at one point where we almost ended up in a swamp (I had visions of Krull - "I found Rob's body in the quicksand.") We were pretty hot and sweaty by the time we finally got back to the main beach, but looking forward to a swim and some food. Unfortunately, as soon as our feet touched the sand it started to rain. We went swimming anyway, but the rain continued intermittently for the rest of the day, waiting to soak us properly on the boat back to the mainland. Still, it was the first beach break we'd had since Ha Long Bay, and well worth the trip over to the island. Why is it called Rabbit Island? Because if you lie on the floor and squint at it a bit through a beer glass, it supposedly looks like a rabbit. I think the locals have a vivid imagination. 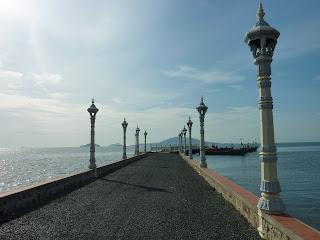 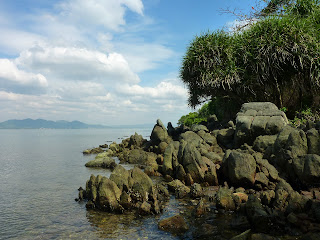 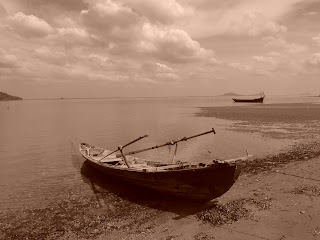 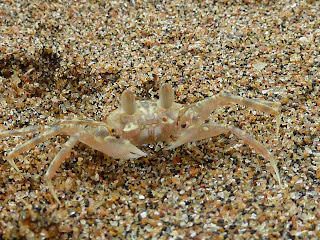 Still, we enjoyed a decent meal of fried fish at one of the shacks, did a spot of reading, then got the boat back to the mainland at 4pm. Our final meal in Kep was back at Kimly, where we splashed out on two plates of crab: one with the famous Kampot pepper (this stuff is pretty special), and the other which was labelled as having "spices", but turned out to be a satay sauce which worked really well. 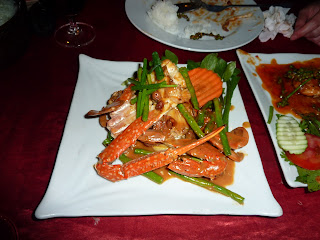 I think crab has dethroned shrimp as my new favourite seafood.
We left the guesthouse the next day to head to Kampot, the home of the pepper and according to a few people we'd met, lots of fun stuff.
Posted by Rob at 12:13 PM

Thx for your post, I really enjoy your blog. Long time lurker, first time commenter, you know the drill. I tried to share this one time before, I don’t think it posted correctly…hopefully it will this time!