You would think after visiting a sleepy little coastal town like Kep we'd be happy to spend a few days in Kampot. Oddly though, Kampot compares unfavourably with the smaller town. I think it may be due to the slightly sprawling way everything is laid out. The guesthouses are a fair distance away from the riverside and the restaurants are also spread randomly. In many ways, it's like a "normal" town rather than one catering to visitors which would be great if there's anything of note to do...but there isn't.

We did consider going to Bokor National Park and wandering around the ghost town. That plan was ditched as soon as we found out that there are some huge developments going on which have ruined any sort of atmosphere the place may have had.

We originally planned to stay at "Olly's Place", a set of bungalows by the river about 3km out of town. When we got there though, it seems like his website oversold the rooms significantly. They are basically 8ft by 6ft huts on stilts, with cold water and share bathrooms. All of this I could have coped with if the bed was comfortable. It wasn't. We hightailed it back to town, and spent one night in Sambor Sambath guesthouse (stuffy and not particularly comfortable) and the next night in Long Villa (cooler, more comfortable but pretty grim). If we visited again, we'd probably head to the main guesthouse strip nearer the centre. As it was, we were walking from Olly's with fully loaded packs in 30 degree heat and decided to take the first place we came across. Typically, in a country over-run by tuk-tuks to the degree that you want to set fire to the next person that asks you if you'd like one, when we actually wanted a tuk-tuk to get us into town there were none to be found. None. That seems to me to be Kampot all over, a town of contradictions.

So what did we do in the two days between getting in and out? Well, after arriving we ate at Captain Chim's (not bad), went to Rusty Keyhole for dinner (amazing ribs, possibly the best I've ever eaten), and had a wood-fired pizza at Long Villa the next night (took the best part of an hour to come, but was worth the wait in the end). In the daytime we played mini-golf and Trivial Pursuit at the Magic Sponge which is owned by an Alaskan man so relentlessly cheery, he could bottle it and sell it to the UN to make the world a better place. We bought some fantastic "pepper cookies" from Salt and Pepper bakery, which sound like they may be disgusting but actually tasted fantastic. We browsed the town's single bookshop and I picked up another novel ahead of beach time in Sihanoukville. We also made friends with a tiny gecko (it is alive, but it was playing dead for the photo). 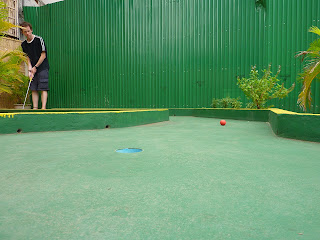 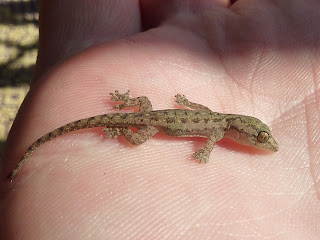 Finally, we took a river cruise with Captain Chim down the river at sunset on the second night, under the gaze of the Bokor mountain range. This was well worth doing, and was a peaceful, enjoyable trip with some great photo opportunities. 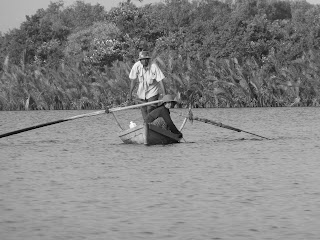 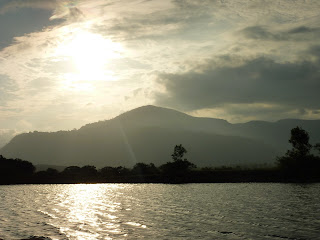 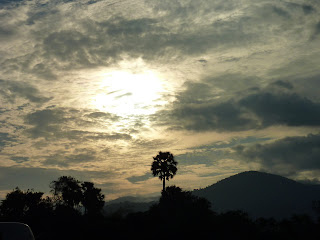 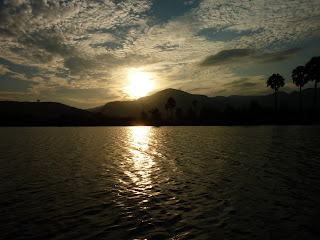 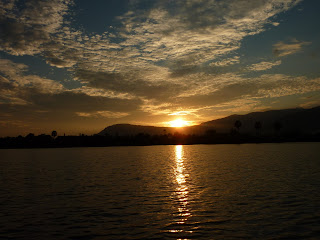 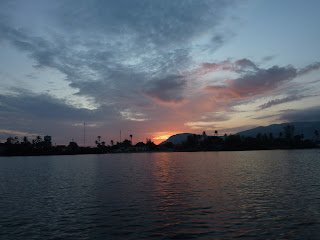 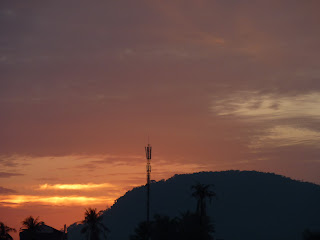 No river cruise would be complete without some post-cruise cocktails, so we spent an hour looking over the river from Rikitikitavi restaurant doing just that.

Two days in Kampot was plenty for us, and we were keen to head on to some beach action in Sihanoukville so we booked an 8am bus the next day which, predictably, came at 8:45. Cambodian people make the Laotians look punctual.
Posted by Rob at 12:11 PM