We left for Dalat at 8:30am, and stopped for breakfast less than an hour later where I ordered a Tiger beer for no other reason than I could.  I didn't even want it really, but  this is a voyage of discovery, and I have now discovered that a beer isn't really the best thing to drink first thing in the morning, especially with a 4 hour journey ahead of you. I guess hair of the dog only works if you’d had enough hair the night before to justify it, which I hadn't.
Gilly was in charge of finding us accommodation after our original hotel plans fell through due to being booked out and not replying to emails asking if they were full. We landed at the Peace Hotel in a spacious, if not particularly warm room.  After grabbing a cheap, tasty meal in the attached café, we decided to explore Dalat.
Home of the famous Dalat milk, I’m almost ashamed to say I didn’t drink any whilst I was there. I guess my milk craving had been sated back in Nha Trang, and now that milk was everywhere, the excitement of finding it just wasn’t there.  Dalat is a city which I was quite looking forward to seeing, but ended up feeling a bit disappointed to. Maybe it had been hyped a little too much by some of the people we’d met, but it was no Chiang Mai, and no Luang Prabang. It wasn’t even Hanoi. As cities go, it was small in comparison, but there was a decent sized lake in the centre which had swan-shaped pedaloes.  We decided to give them a go, and jumping into the hastily named “Cedric” (Gilly’s choice) we pumped our legs for the best part of an hour in order to get a river view of the surroundings. It turns out that an hour of pedaling against a stubborn current is bloody hard.  It got to the point where we almost beached ourselves against the bank, much to the bemusement of a local fisherman whose waters we disturbed.
Back on dry land, we strolled through the hilly streets, taking in the usual assortment of rstaurants and art galleries. One gallery in particular had some spectacular palette knife paintings at crazy cheap prices – well, compared to what you’d pay back in Blighty, anyway. I vowed that if (when) our lottery numbers come in, I will be on the phone to Mr. Phuong immediately and getting some paintings shipped over to decorate my new castle-mansion.
It’s fair to say we use TripAdvisor a lot. Some may argue that part of travel is in exploring the unknown, seeking out new life and new civilization, and boldly going into the culinary world where few westerners have gone before. I agree, to a point. That point being: if a boatload of people recommend a western restaurant and I’m in the mood for western food, then I’m damn well going to eat there if I can. Sometimes though, TripAdvisor gets it wrong. The “Wisdom of Crowds” doesn’t necessarily hold if people a) are being paid to write good reviews of a place, b) have lower standards of what merits “good” or c) are idiots. Such was our experience of V Café, which promised a wonderful mix of excellent food and live jazz music. On our arrival, the latter didn’t transpire as the musician had buggered off for the day elsewhere. The former was a disappointment. Quesadillas and green curry aren’t particularly time-consuming dishes to make, or even get wrong. When they finally arrived 45 minutes later, we were expecting the culinary equivalent of Mozart but ended up with a Hans Zimmer rehash.  Only the homemade chocolate pie - ordered on a whim since I was still hungry - managed to get everything right with delicious shortcrust pastry and a divine chocolate mousse topping. It was the saving grace of the restaurant. On our way back, we stopped at the Les Sapins hotel next door to ours to ask about rooms. It was a spotlessly clean place, double-glazed, and almost certainly new – there was plastic still covering the wall sockets.  The bed was firm but after some discussion with the very odd girl running the place, she agreed to match the price of next door’s room.
The next morning we moved our stuff over, and walked to the outskirts of the city centre to check out a couple of Dalat’s sparse sights. We contemplated getting either bicycles or a motorbike, but decided against it after seeing some of the insanity on the roads. If there’s one impression present-day Vietnam will leave me with, it’s the chaos you have to deal with when crossing a street. You need to be 18 to have a licence for a lot of bikes, but for scooters and mopeds under 100cc, a licence isn’t required.  People of all ages take to the roads, texting whilst riding, calling whilst riding, loading their bikes up with planks of wood, sacks of rice, live animals, sometimes 4 people to a bike. Apparently, Ho Chi Minh city (our next destination) makes Hanoi look like a fairly quiet town and Dalat an abandoned wasteland – 10 million people, 6 million bikes.  Can’t wait.
We decided not to get ourselves killed, and walked to Ga Da Lat – the city’s old train station; it only runs one service to Nha Trang and back from what we could gather. Gilly’s dad loves trains so we thought we’d take a few photos of what looks to be a steam engine which is no longer in use, both for his enjoyment and also so he can tell me that it isn’t a steam engine. These are for you, Steve: 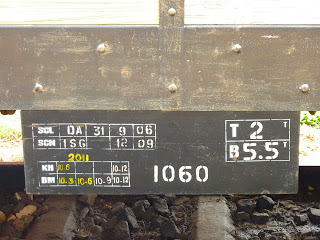 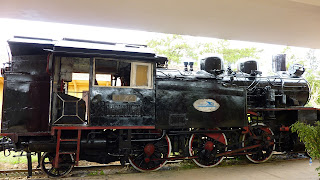 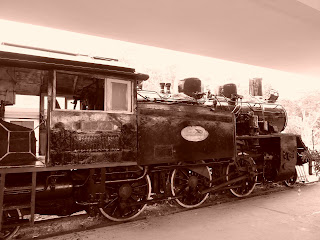 After grabbing a decent-sized lunch at a nearby café whilst having the “pleasure” of listening to Michael Bublé murder a dozen Christmas classics on his cynical new cash-in album,  we moved on to the excellent Lam Dong museum.  The main building housed the usual collection of pots and other excavated gubbins, but also a bizarre gallery of taxidermy and some interesting musical instruments. In the surrounding grounds there were a couple of traditional tribe “longhouses” which gave us an idea of how the various tribes lived, a house dedicated to the former king and queen of Vietnam and a huge gong placed next to the longhouses for reasons unknown.
Food that night came courtesy of Tu Anh’s, the proprietor of the same name being what can only be described as “a bit nuts”. Lovely woman, talks incessantly at a machine gun rate, takes care of her customers, a real dining experience. The food, mostly western, wasn’t bad either.
The next day we decided to take a tour with Dalat Easy Riders Club. This was essentially a day trip around some of Dalat’s sights outside of the city, riding pillion on a motorbike being driven by one of the 26 club members who make up Easy Riders. They must be doing something right, as we had seen dozens of copycat tours during our travels through Vietnam; the bikers do anything from day trips to month-long bike treks up and down the country.
We were introduced to our riders, Mr. Bin and Mr. Ky. The former had been in the club for about 4 years, the latter only a couple of months. Whilst Bin spoke fantastic English,  Ky had barely half a dozen words, which he made up for by a number of energetic and often hilarious mime actions. The day tour was jam-packed, and we crammed in a whole host of visits including: 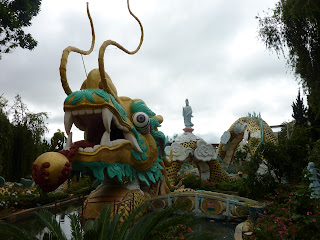 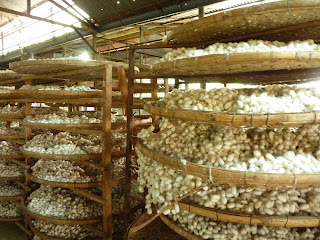 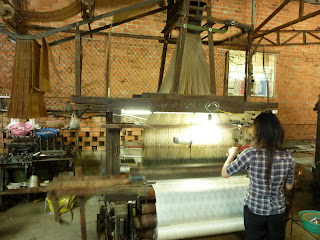 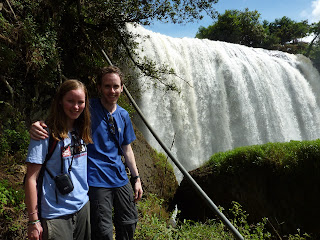 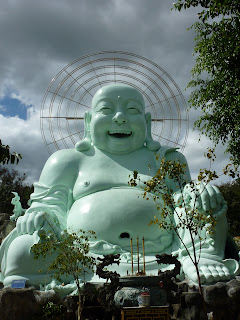 We ended the tour in the afternoon with a trip to the Crazy House. Built by the daughter of a former Vietnamese president, it lives up to its name, looking like the lovechild of Tim Burton and M.C. Escher. It feels completely organic, with paths and corridors intertwining and going off in a hundred different directions, and a variety of themed rooms such as the Kangaroo room (complete with kangaroo statue with glowing red eyes), the Bear room, the Tiger room, and so on. It was a fascinating place to explore, like a Disney house would look if Uncle Walt had taken a rather nasty LSD trip. A 20-year labour of love, the architect Dang Viet Nga had to overcome a lot of opposition to the house, mainly from the local community who considered it an eyesore. Happily, the reaction by most visitors appears to be positive. It’s certainly unlike any place I’d visited before, and was probably the highlight of the day and a great way to end the tour. 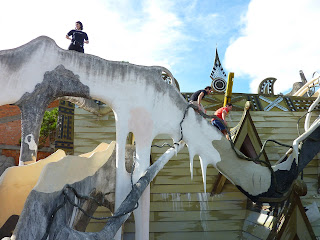 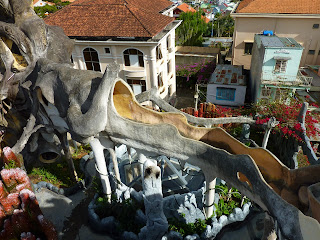 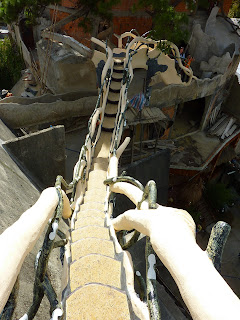 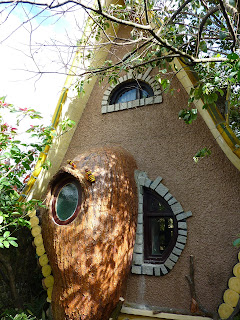 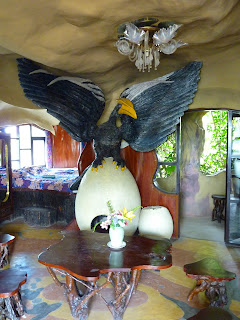 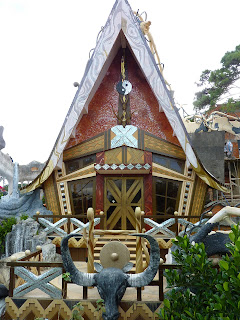 Once back at the Easy Riders office (handily located next door to our hotel), we talked to Bin about doing a 2-day tour and exploring the “real Vietnam”, as he put it. We wanted to be in Ho Chi Minh for Christmas Eve, so he arranged a tour that left on the 22nd December, finished on the evening on 23rd December, and would have us on a sleeper bus which arrived at about 7am on the 24th. We thought it was an opportunity too good to miss, so decided to go for it. The tour would take us up to the central highlands, and en route we would see a plethora of authentic Vietnamese sights which aren’t generally covered in the guidebooks.
We ate at Tu Anh’s again that evening and, excited for the tour ahead, got an early night ahead of an 8:30am start.
Posted by Rob at 4:05 PM

My good man, it is well known to those who know it well that it is always beer o'clock. Beer at any time of the day can be joy to behold - push on and I'm sure you'll uncover the delights of a.m. inebriation.