After being woken in the night by hail battering the roof of the van, we hit the road as early as we could from the Greymouth pit we stayed in, and found a rainbow on the way. 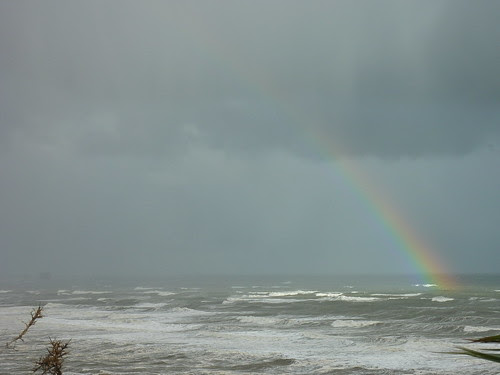 As can be seen, the weather wasn't playing fair, and by the time we reached the Punakaiki pancake rocks and blowholes, we were engulfed in another huge hailstorm on the way.

The pancake rocks were fairly unexciting - layers of rock that had stacked up over the years, and were slowly being eroded until they collapsed. The main blowhole was powerful but the effect of it was lost somewhat since we were being buffeted all over the place by strong winds and sleet. 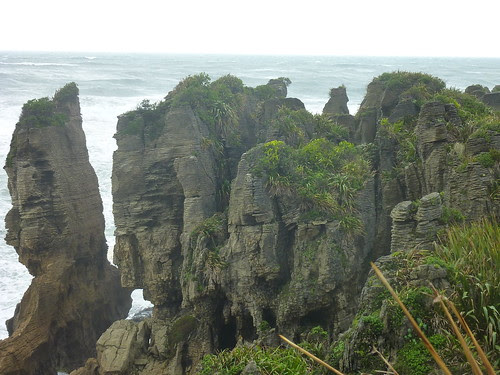 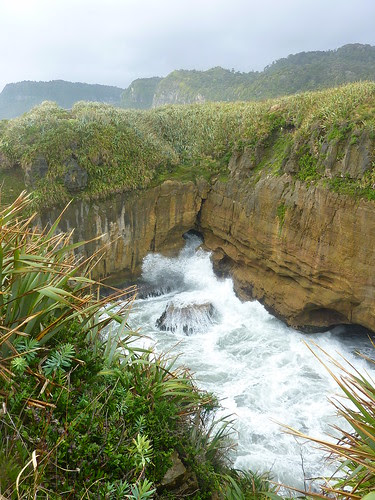 Some of the pancake rocks had formed into "shapes" of a prowling lion on the right and some people on the left, if you squint really hard and play "let's pretend". 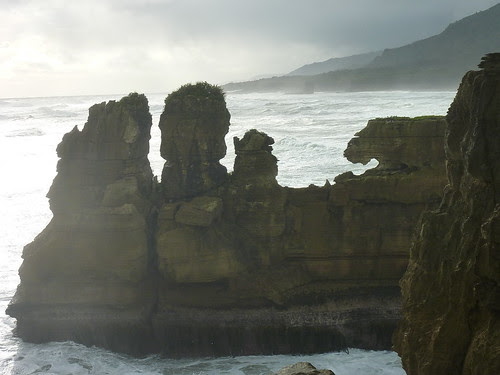 A more rewarding stop was at Cape Foulwind seal colony, where we made up for the disappointment of the Otago Peninsular by seeing a whole herd of adults, along with some newborns. 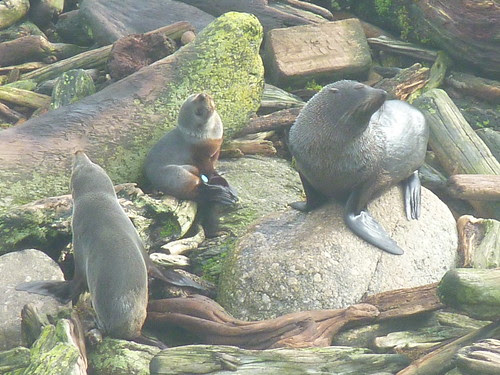 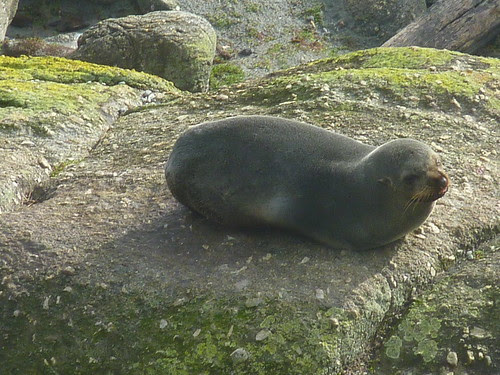 Rainbows were the order of the day it seemed, as we saw another great one further along the road. Living in a city centre in the UK, we don't really get to see that many; they're usually blocked by buildings - it certainly isn't due to a lack of rain. This one could have been pulled right out of an Irish travel brochure. 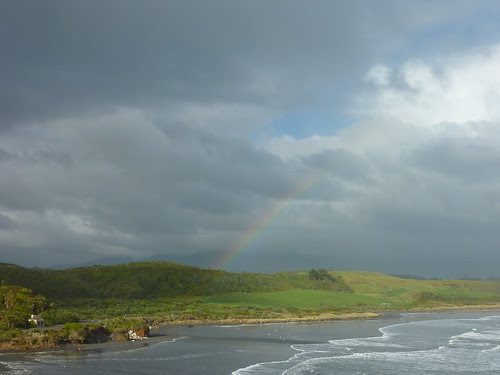 We stayed in Westport that evening at another Top 10 park before another early start where we planned to get to Nelson. The weather had other ideas. For the first time since getting into the New Zealand winter, we were actually driving through a snowstorm. Pulling up at a nearby activity centre, we were told that the pass to Nelson was shut. Thanks to NZ's "single road to everywhere" approach - which is fantastic usually - it meant that the only way to get to the city was closed. Our only alternative to turning around was to continue on to a small town called Murchison where the tourist information place told us that the pass would be closed for the entire day. We could either get a campervan site further up the road, or splash out a bit and get a double room at a hostel. The temperature convinced us that we deserved a break, so we checked into the Lazy Cow Backpackers. 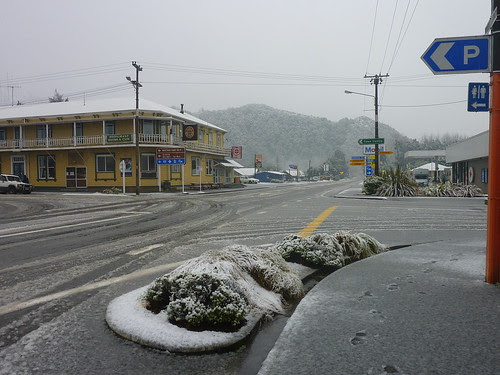 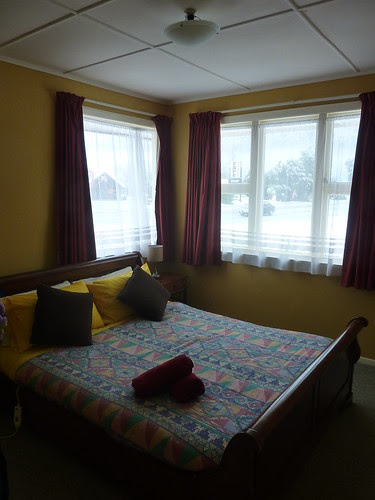 It was less a hostel and more like somebody's house which had been converted into wonderfully welcoming rooms; compared to the campervan, there was no contest. Cow images were everywhere in the living room and kitchen, on the walls, plates, tablecloths, you name it. There was also a lovely wood burner which meant we could just curl up and sit in front of the TV to watch a couple of films from the extensive DVD selection (our choices - State of Play and The Hurt Locker, both excellent). Another couple had also been caught by the weather, but they'd got as far as the pass and had been turned around just as it had closed which must have been frustrating.

We could have easily stayed there for a few days, but since the pass was open the next morning we thought it best to take advantage of the better weather and drove up to Abel Tasman. This is a beautiful area, and has plenty of hikes which would be great in the summer as there are lots of places to camp along the way. We did a 4km round trip to Coquille Bay and took in a few of the sights, but would love to return to do the entire hike someday. 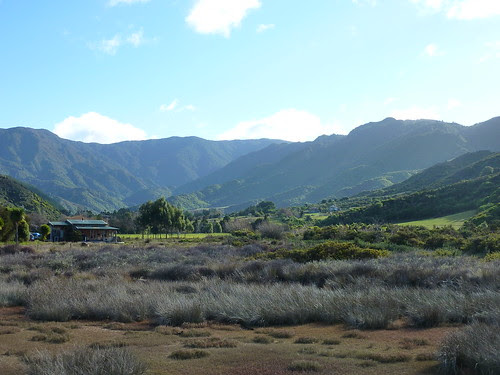 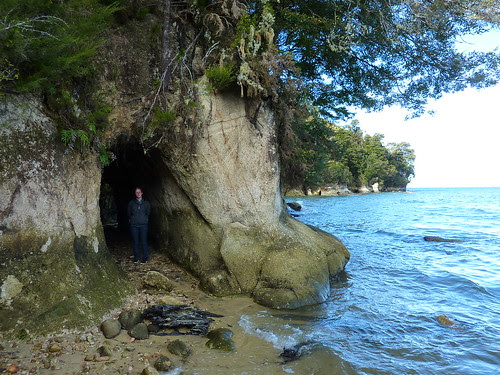 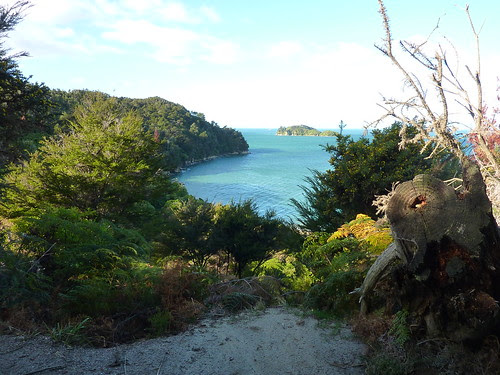 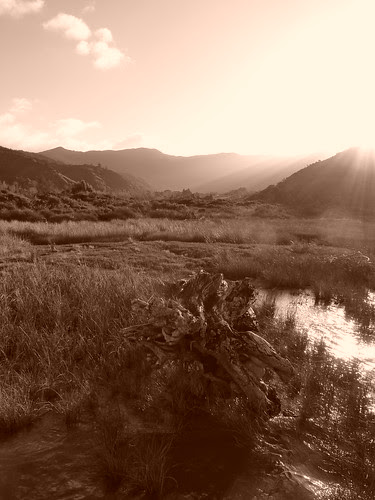 After a good few hours, we returned and plodded on to Nelson. Like most cities in the country, it is fairly small but enjoys the most sunshine of any NZ location. Sunglasses are most definitely needed here - the sun is blindingly bright.

Unfortunately that evening the sliding door on the van broke. Not enough to prevent us opening and shutting it, but enough to make it a complete pain each time we wanted to. A call to Britz later, and they told us to take it to Saint Arnaud to get fixed. Fantastic, we were in a city - Saint Arnaud must be one of the districts nearby, right?

Saint Arnaud is an hour and a quarter away, on a narrow, winding, icy road. The perfect place to take a campervan, if ever I'd seen one. We decided that Britz knew something we didn't, and there would be a campervan door specialist waiting to fix it all up once we struggled up the hill.

The mechanic told us that (despite my fairly detailed report on the phone to the operator) the in-depth issue he'd been given by Britz was "they have a problem with the door". With that kind of laser-sharp accuracy to go on, it's difficult to see why he had a little trouble when he actually saw the problem. The roller of the door had been sheared off, and needed a new roller and ball bearing. He didn't have either of those things, and could have told them that if they had bothered to pass on what I'd told them in the first place. The journey wasn't totally for nothing though; in the clever way that mechanics have of botching together fixes on-the-fly, he managed to somehow do something with a bit of metal and a blowtorch which I believe the scientists call welding (eagle-eyed readers may discern that my engineering skills are only just above those of a chimp) and we had a working door that would last until we returned the van.

Whilst he was working, his wife introduced us to their gorgeous dogs - a golden retriever and a new border collie puppy they'd just got which was too cute for words. 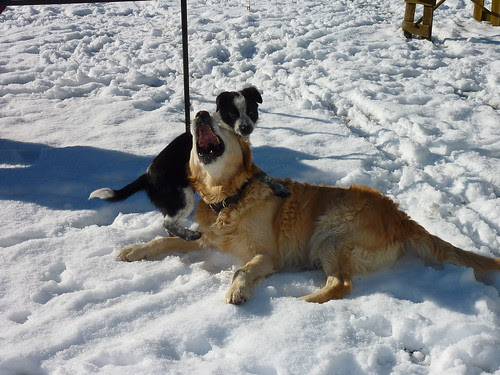 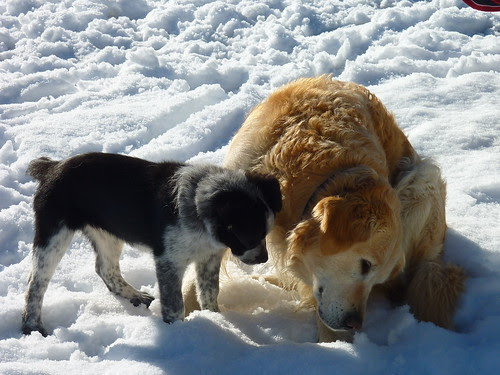 Since we were in the area, we took in the spectacle of Lake Rotoiti at lunchtime before driving back to Nelson. 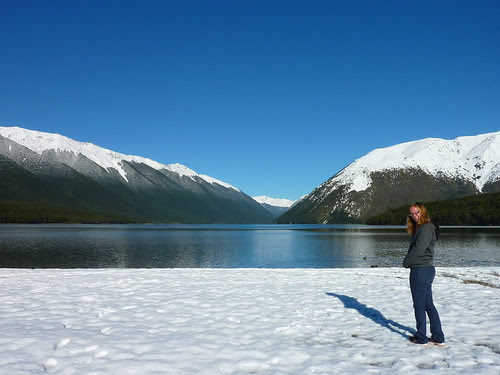 The following day saw us visit Nelson cathedral, which had a design I'd never seen on such a building before, and the Suter art gallery which housed a few interesting modern art installations but only took half an hour to walk around. 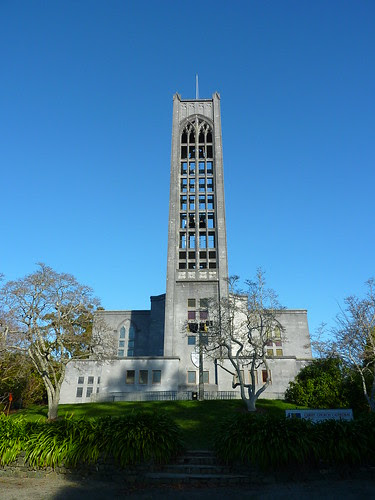 Nelson centre only has five or six main shopping roads, most of which are cafés and restaurants. Still, after our big freeze on the west coast it was nice to enjoy the sunshine for a few days. Blenheim was our endpoint that evening: the gateway to the South Island's numerous wine tours in the heart of Marlborough. We booked a half-day tour for the next day and prepared to get sozzled.
Posted by Rob at 6:19 PM