After dropping off the Britz van (predictably hassle-free) and getting to the airport, we made a bee-line for duty free. We'd been told by many people on the way that it would be cheaper to stock up on a few bottles of spirits here than to wait until Fiji. Four litres of booze later, we were ready to roll.

The Air Pacific flight was great. Even though it was only 3 hours long, we were given a snack box with a chicken wrap, pasta and crisps, and as much New Zealand wine as we could drink. Since we were unlikely to be having any wine for the next three and a half weeks, and having been spoiled in Australia and NZ by the quality, we decided to take advantage. After drinking practically a bottle each before landing, we were feeling well-lubricated and ready for a complete change in our pace of life.

We'd booked into Bluewater Lodge on the recommendation of Paul and Fi, who had done this trip a month earlier. The hub of cheap accommodation is actually outside of Nadi centre, right next to a beach. After a short taxi ride, we checked in with Mary, who was going to arrange our trips out to the various islands with us. The best thing to do is to get out of the mainland as soon as possible; the beach around the accommodation area is not the best - dark sand and murky seawater make it less than ideal to stay around.

Bluewater Lodge was also touted as one of the best places to eat in the area, and that turned out to be spot on. We had two evening meals there during our stay: Lemon chicken and seared yellow-fin tuna (both with amazing mashed potato) were my choices, whilst Gilly settled on an aromatic chicken curry and beef rib fillet. The portions were generous and the meals came out on plates the size of a rubber ring.

English is the national language of Fiji, and other than "Bula" (hello) and "Vinaka" (thank you), we didn't see any other written Fijian, which made it very easy to communicate. The locals speak both English and Fijian, and are very friendly. You can't walk anywhere without someone shouting "Bula!" or coming up to shake your hand and ask where you're from.

Bluewater Lodge was our first dorm experience (at least, with people we didn't know) on our entire trip. The first night we were sharing with a lady called Peta who was heading to Tonga and then Honolulu. She'd spent a few enjoyable days at Barefoot Lodge, which was one of the places we'd heard good things about from our fellow Miltonians. The second and third nights we were moved to another three-bed dorm with a guy called Simon, who had a tendency to come in at 3am completely wasted, pass out on the bed, then not get up until midday. He was running an internet-based personal trainer business which seemed to involve him doing an hour's work at the pub with his laptop, then spending the rest of the day drinking with the locals. Nice job if you can get it.

The main places of interest around the area are Smugglers Cove, an upmarket hostel with prices to match; Bamboo, a budget option with comfort to match, and Aquarius, where we ate lunch and dinner on our third day. We saw a great sunset over the beach one evening, which made up for the fairly cloudy weather we'd experienced since arriving. 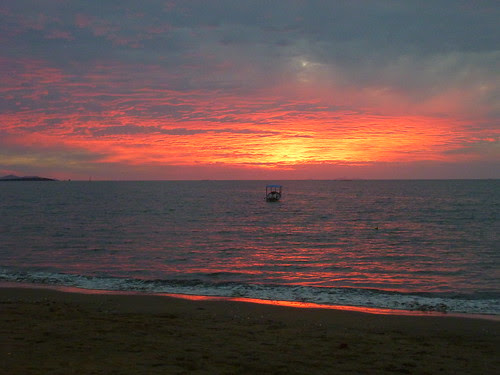 It took a while to accustom ourselves to not doing much again. After zipping around Australia and NZ, where we would be in a different place every day with new things to see and do, it's a bit of a culture shock to be in a location where there are few activities other than sitting around, reading, swimming, sunbathing and playing cards. This trip was basically our "holiday" from travelling. 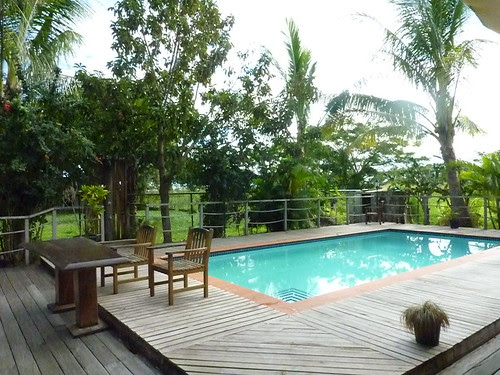 We'd organised a 5-night trip out to Maqai (pronounced MANG-EYE) with Mary, leaving on our fourth day. We left at 9:30am to take a minibus to Suva. This took a little longer than planned, since the bus developed a problem and we had to wait around for 20 minutes for another to arrive before shifting all of our gear over to it. Thankfully we'd only packed one large and one small bag, leaving the rest at Bluewater Lodge for our return.

We got to Suva at around 2:30pm, but needed to be back on the ferry at 4:30pm which meant our plan to go to the cinema in the afternoon didn't work out. Instead we wandered around the city which, in all honesty, doesn't have a lot going for it. We ate a fairly bland meal at a food court, picked up some water and then headed back to the ferry. 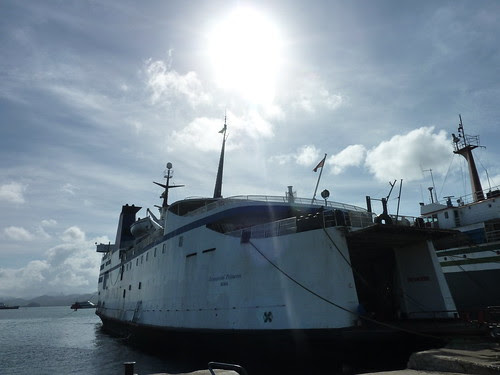 The Lomaiviti Princess is a large car and passenger ferry which is almost 50 years old. A one-way ticket is $65, or just under £24. For an overnight trip, you may reasonably expect some sort of bunk or a level of comfort to allow you to sleep. This is what we got: 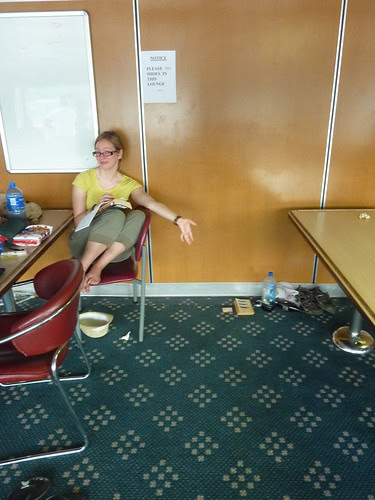 We were due to get into Taveuni the next day at around lunchtime, before taking another boat for about an hour from there to Maqai. I was desperately hoping the trip would be worth it.
Posted by Rob at 1:09 PM