Our itinerary had practically matched Paul and Fi's in Fiji. We had considered visiting some other islands but had discounted it in the end due to either a) cost or b) distance. Their recommendations had been excellent thus far, so when they told us we should do a shark dive and stay at Uprising there was no hesitation in booking.

The shark dive with Beqa gives you a two-tank dive plus a night's accommodation in Uprising for $320, plus another $30 for marine fees and fuel surcharge. I can say with confidence that the dive is absolutely worth doing.

The marine park is protected, and is the only one of such status in Fiji. Shark fins are still in ridiculous demand - especially in China - and the amount of fins shipped over there each year comes to millions of tons. It is a barbaric practice, and one that Beqa Shark Dive is trying to change by lobbying the government to alter its laws. They reason that the country could make more money from selling dives with sharks than they could by killing them, and more importantly the shark population would be protected.

We got kitted out with dive gear including brand new masks which isn't as great as it sounds; new dive masks are coated with silicone and the layer needs to be removed with toothpaste or some other abrasive chemical, otherwise it fogs up underwater and you can't see a thing. This is what happened to me on our first dive, but luckily one of the divemasters swapped masks with me underwater and all was well.

The dive itself is on three levels. We descended to 30m first of all and hovered behind a wall whilst a wheelie bin full of huge fish heads was brought down. The feeders then began holding up the heads; we were immediately surrounded by thousands of fish of all shapes and sizes, with Sergeant Majors being the most populous. It didn't take long for the bigger fish to catch the scent of the food though, and within a couple of minutes the first sharks arrived. Bull sharks are one of only three species of shark that will actively attack humans (tiger and great white being the others) but it seemed that they were quite happy to be given fish heads instead, and were happy to swim right up to the feeders and snatch the food from their hands before crunching it up and coming back for more. There must have been six or seven bull sharks circling the feeders, and they were less than five metres in front of us. It was a jaw-dropping sight. We were so transfixed that we almost missed the turtle swimming lazily behind us.

If that wasn't enough, we then ascended to 15m and the next level of feeding began. These were grey reef sharks and whitetip reef sharks and the greys were significantly more aggressive with their feeding than the bulls had been. A number of divemasters had padded metal poles to ward off the sharks if they came too close or looked like they were going to be a nuisance; these sharks got crazily close to us - so much so, that at one point I could have lifted my hand and touched the belly of some of them as they swam over our head. Oddly, despite all of the activity and the amount of sharks in the area, I felt completely safe during the entire dive. It was staggering how close we were to these beasts, and put into perspective how over-hyped the danger of sharks is. Jaws didn't do the fish any favours at all.

The last level was at around 5m and coincided with our safety stop. There were more grey reef sharks there as well as nurse sharks, and at one point a bull shark came up to our level to have a nose about and was quickly chased away by the feeders, as Beqa are trying to ensure that the sharks learn to stay at their assigned levels for feeding.

After a surface interval with some tea and biscuits, we were back down for a second dive in a different area. This one only took in one shark feed at 25m. The bull sharks didn't seem particularly hungry and were happy to let the fish heads get eaten by the smaller inhabitants of the sea. We then had a swim at a fairly shallow depth and took in the various soft and hard corals in the area; Fiji was easily more colourful than the Great Barrier Reef, and had an abundance of interesting plants and creatures.

I wasn't sure what the shark dive would be like, but I can safely say that all expectations were surpassed. This was one of the highlights of our Fiji trip, and one of our best dives (only Malapascua's thresher sharks and the overall magnificence of Sipadan came close) and as potentially the last dive we'd be doing on our travels, certainly ended our underwater adventures on a high.

We returned to Uprising and had a late lunch - curry, very good - and set about getting some free wi-fi which Paul and Fi had raved about when they visited 4 weeks earlier. Alas, it seems that things can change for the worse in a month. The management had stopped the free wi-fi and replaced it with the dreaded Global Gossip service ($2.50 for 15 minutes, insane). Luckily for us, one of our dorm-mates had been told the password for Uprising's own network so we were able to get online without bankrupting ourselves, as long as we stayed in the lobby area. It wouldn't have been as disappointing if all of the literature and website information on the place didn't advertise it as a perk but I guess getting that updated on "Fiji time" may take a while, especially if it keeps bringing the punters in...

A trip to Pacific Harbour is ten minutes on foot. There are about eight shops, an ATM (tip for visitors - ANZ doesn't charge a transaction fee, the other one does), three or four restaurants and a supermarket. We considered doing some other activities whilst we were here, but the canyoning trip which we were most interested in didn't run on the days we had left. It may have been for the best, as the weather was appalling for the next couple of days.

We had a look around Uprising in the evening, which comprised a pool, bar, restaurant, and a large dorm. 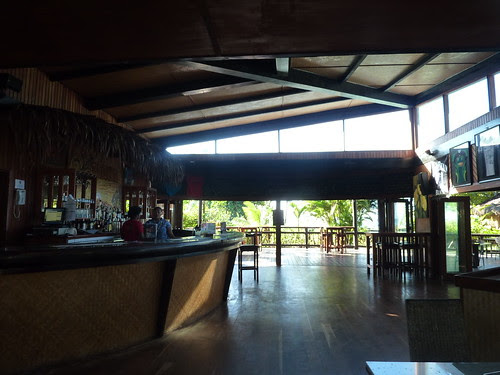 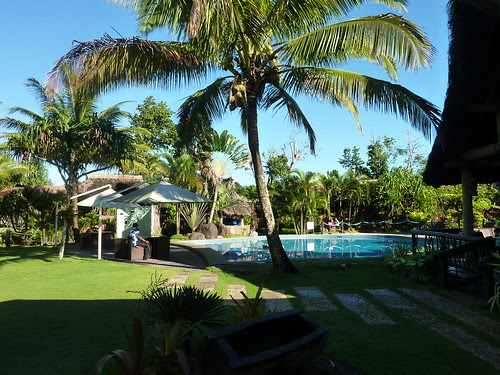 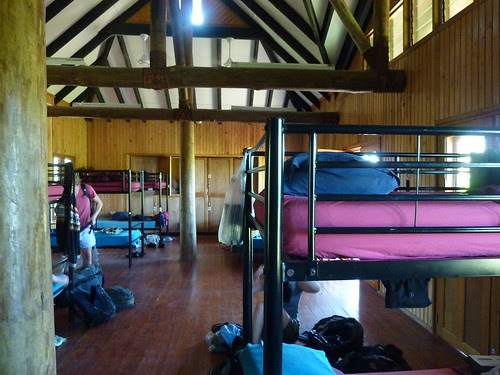 This was the biggest dorm we'd been in, and all of the problems inherent with such dorms prevailed here. Snorers abounded - earplugs are an essential travel item - but the worst was the drunken English people coming back at 2am and deciding to have a loud conversation in the middle of the room. The American woman in the bed under me asked them to be quiet, as did I, and only after two attempts to get some peace did they finally shut up, but not before the sozzled English girl uttered the following: "Well if you wanted sleep, you shouldn't have stayed in a hostel." There's so much wrong with that statement that my mind short-circuits every time I try and parse it. I let it slide, and she was soon snoring with the rest of them. Irony abounds, it seems.

Uprising also does laundry for the extortionate price of $16 per bag. I'd suggest taking a 5 minute walk to Pacific Harbour for pretty much anything you are looking to buy in Uprising - laundry, internet, water, food; it's all considerably cheaper there.

The day after the shark dive we decided to go to Suva and watch The Dark Knight Rises. After getting an early local bus into the city and arriving at 10am, we found out that the receptionist had given us the wrong times for the film, and we wouldn't get to see Batman until 3:30pm. Deciding to make the most of the day, we instead went to see The Bourne Legacy in the morning which was surprisingly good. Cinema tickets in Suva are $6.50 (about £2.30) even for 3D shows so you won't be breaking the bank. After a Chinese lunch at Restaurant 88 in a food court, we braved the torrential rain to go looking around various electronics stores for a portable speaker, as our X-Mini's wires had frayed. The only candidates we could find were cheap Chinese knock-offs, so we decided to wait until we got to the US. After a muffin at Gloria Jean's, we finally got to see the caped crusader in a trilogy conclusion which featured surprisingly little Batman, a preponderance of gloom, a bad guy that sounded like Darth Vader channelling Daniel Day Lewis' character in There Will Be Blood, plot twists a-plenty, and a ticking bomb finale (which didn't really make much sense, but hey ho). All told, it was a decent ending to the series, but not as good as the superb middle film.

We thought we'd have trouble getting a bus back to Pacific Harbour but we needn't have worried. Whilst the main buses from Suva stop at around 6pm, there are plenty of local buses. This one hung around until 7pm before setting off, but it gave me the chance to take in the local preaching shacks set up around the bus station. One such hub was here: 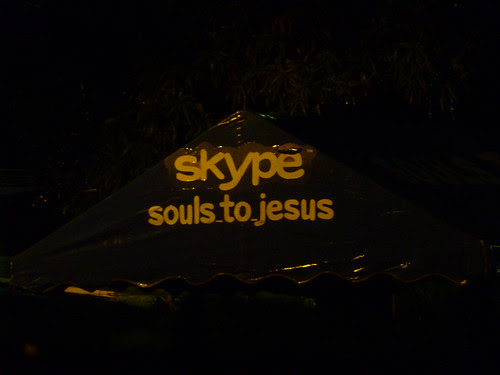 Now, does this mean that there is wi-fi in heaven? Can you give God a call and get some face time? There are so many questions that need answering here.

We left Uprising the next morning and moved to Tsulu. We could get a double room for a cheaper price than two dorm beds in Uprising so it made sense, and our decision was truly justified when they upgraded us for free to a double with en suite. Tsulu is a "luxury backpackers" but it's more like a budget hotel than a hostel, with towels, complimentary shampoos, etc. It has a decent pool too: 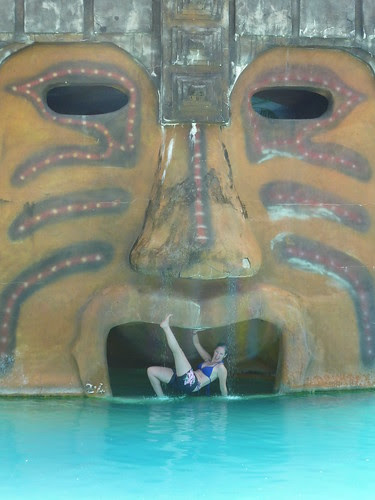 Since we were right in the centre of Pacific Harbour, the restaurants were on our doorstep. We ate at Baka Blues Bar for lunch (burger / chicken salad) and dinner (baby-back ribs and mash) and it was a decent feed with live jazz music in the evening and great surroundings. 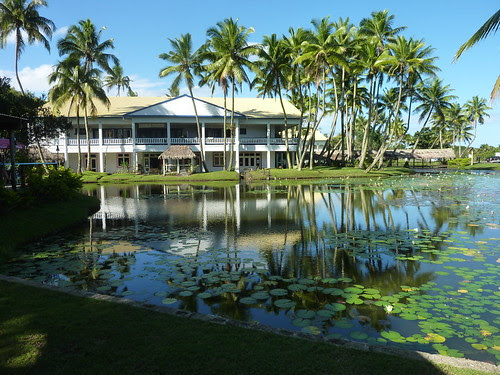 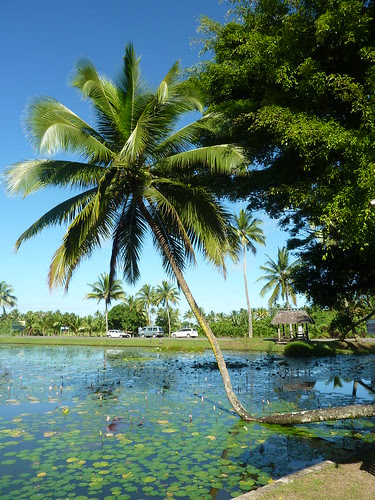 Our flight to LA wasn't until 10pm the next day. We had to get to Nadi Airport on a bus which was a good 3 hour drive, so after an 11am checkout we grabbed a pizza at Perkins Pizza (around the corner from Baka Blues Bar) and hopped on a 2pm bus. Even though the flight left at 10pm, we arrived in LA at 1:30pm earlier that same day. I know that the international dateline seems like an obvious thing, but I still can't get over the feeling that I've stepped into a time machine. The flight wasn't the most comfortable, but we managed about 5 hours of sleep on and off, and were ready to hit the road in the 12th and penultimate country on our tour.
Posted by Rob at 1:36 PM

Thanks for sharing such wonderful post. I am really impressed by your work which you have done on your blog. Keep posting. cave diving mexico.

Amazing collection of pictures, which you have shared here. These pictures are very awesome. Keep sharing these types of pictures here. Cave Diving Tulum