Buddha Park was well worth a visit. There were hundreds of statues, from fairly small to monumental (excuse the pun) in size. One reclining Buddha was a good 20m long if not more and tall to boot. For size comparison, my lovely assistant Gilly demonstrates below: 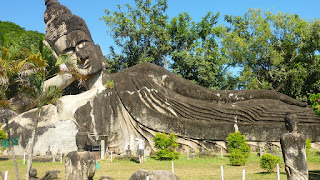 It wasn't all Buddhas though, a few other religions made an appearance as well - Ganesha, the Hindu Elephant god, for one - as well as some other oddities such as mermaids, monkeys and a huge stone building almost conical in shape which had been hollowed out and split into 3 tiers containing more statues within: 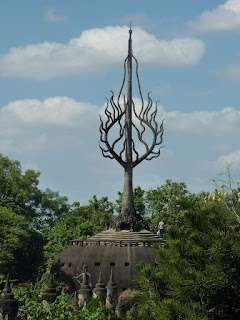 We had lunch there and headed back to the city. We found a computer shop and decided to splurge on an Acer D257 netbook. Great, we thought, now we can get stuck in to uploading photos and doing other internetty-related activities. After unpacking the box we realised that the shop hadn't packed a power cable for the netbook. Fantastic. I dropped them an email via the Kindle that we would pick it up the next day.

Our guesthouse gave us cake and tea in the afternoon, wonderful. In the evening we ate at Dok Champa; I had spicy fish and loved it, whilst Gilly wasn't that impressed with her curry. If in doubt, go for spicy fried fish - a lesson we learned after the meal in Houay Xai (which hasn't been topped yet in terms of deliciousness). Our mealtime entertainment was provided by two kittens in the restaurant garden fighting and learning to climb a tree.

The following day we crammed in most of the main Vientiane sights. A visit to the Laos National Museum was first, which was interesting when describing the archaeological digs taking place around Laos, but unfortunately moved on to a not very good description of the "Secret War" waged by the Americans in Laos, which was heavy on anti-American propaganda and light on a decent explanation of the events around the war. Laos is the most bombed country in history thanks to 9 years of US airstrikes, but it would have been good to have a bit of detail about the "American imperialists" rather than just a series of photos of the main players in Laos and the US. It's a bit of a missed opportunity really.

We headed off to pick up our Vietnam visa from the embassy, the netbook cable and then went on to That Luang, supposedly the most important stupor in Laos. It was golden from a distance but fairly dirty up close, and probably wasn't worth the trek up to get to it. Patouxai - Laos' version of the Arc de Triomph - was next, no doubt inspired by the French colonial occupation. Apparently a lot of money meant for aid to the Laos people was instead ploughed into this monument...who needs food when you can have a big arch, right?

In the evening we wandered over to Jazzy Brick, a funky cocktail bar which oozed so much cool you'd expect the door to be made of ice. I'm a sucker for cocktail bars and when they're done right, as this one was, I could happily stay there all night. Some pics: 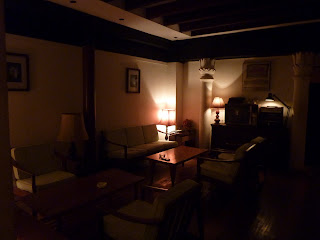 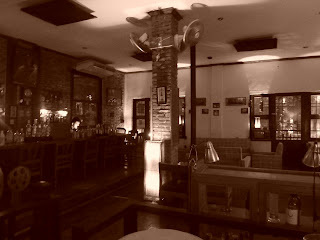 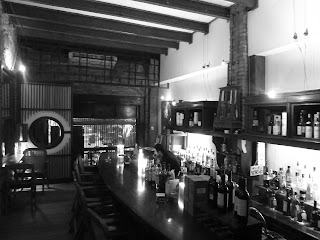 Carefully placed uplighting and retro German appliances aside though, it's not much cop if the drinks are rubbish and the music is terrible. Luckily, neither of these things affect Jazzy Brick, making it possibly my favourite cocktail bar since Dry Martini in Barcelona. A Serpentine, Immaculate, Mint Julep and Aquarius later, we were feeling a bit peckish so ate at Aria Italian Culinary Arts as it was on our road. We had a magnificent pizza, the best we've eaten on our trip so far, so much so that I can forgive them their incredibly pretentious name and £250 wine list.

The next day we left Vientiane on a 9am bus to Phonsavan. The tourist office told us that only 2 buses ran in the morning, that it was 95,000 kip per person, and that it would take 10 hours. It turned out that they had buses running throughout the day (negating our rush in the morning to get to the bus station), it was 110,000 kip per person, and the ride took about 11.5 hours. None out of 3 ain't bad, I guess. The bus journey itself? Well, I've tried to scrub it from my mind. 11+ hours of listening to a mix of Thai soft rock and Lao karaoke pop pelting full blast from an overhead speaker, whilst the bus weaves in and out of its lane on a mountain road honking indiscriminately might be someone's idea of a fun ride but it certainly wasn't mine. The songs weren't even catchy, not even on the eighth listen. I think the bus driver only had 2 CDs and there's only so much synth accordion one person can take before thoughts of how to "accidentally" smash the CD player with a nearby water cooler start creeping in. To make things even more fun, when the driver got tired of the music, a girl to our right decided she'd become the DJ and started pounding out the exact same drivel from her iPhone for all to hear, and then accompanied her music with some delightful karaoke. Deep breaths, Rob.

We arrived traumatised at Phonsavan bus station, stubbornly refused to get ripped off by tuk-tuk drivers and waited until one of them caved and took us to the hotel strip for a reasonable price, then checked into the Dok Khoun Hotel. This was the biggest room we'd had on our trip, but it was also the dullest. The shower resembled a school gym shower room, and the hotel itself still appeared to be under construction. The bed was barely comfortable, but it sufficed for one night. We wandered out to get our first proper food of the day; we'd munched through 2 bags of crisps, a chicken on a stick bought during a rest break, a few bits of fruit and some praline wafer things, so were still fairly peckish. A stop at Simmilay set us right, with huge portions of chicken noodles and a BeerLao to wash it down. We were so tired, even the bed didn't stop us sleeping well. However, Phonsavan was cold in comparison to the rest of Laos - it's the first time I've worn a fleece in the country - and the size of the room didn't help, so we decided to check out the next day and find something a bit cosier and hopefully cheaper.
Posted by Rob at 10:32 AM

Finally had the opportunity to catch up on your spectacular blog mate - it sets a standard I simply can't hope to reach but will endeavour to emulate as best I can. Currently sat on on overnight soft-sleeper train from Xi'an to Chengdu - glorious Kindle magic sees me online.

Have read from about the end of week one onwards and am so jealous of your adventures thus far! Some key points:

- You should avoid cutting you hair at all costs. I want Leo Sayer to be jealous and your 'fro to be visible from space.

- I'm fairly confident that one of your images of a Buddha is actually Sagat's stage from Streetfighter II.

There are many more talking points but I'm on a Kindle and it's taking ages. Keep up the magnificent tales my friend - I'm off to check out the no-doubt equally awesome ramblings of your good lady.

Great update! I enjoyed reading that.

The pizza at the Aria Italian Culinary Arts ("the best we've eaten on our trip so far") sounds good. If I hadn't had a ploughman's sub roll AND a cheese and red onion mix sandwich at lunchtime, I would have fancied tucking into a decent pizza meself.

You should definitely check out Sotto when you get to Los Angeles to see how it compares - best pizzas I've ever had in my life, and I speak as a one man pizza consuming machine. I must have pushed hundreds of these flat tomato covered floury disks into my face over the years, and Sotto comes out on top! 9575 W Pico Blvd, Los Angeles.

The 11.5 hour bus trip sounds like it was the tits!