The perfect hangover cure is obviously a western breakfast. I'm not partial to full English myself, preferring something non-meaty and not dripping in fat. However, Paul is not as picky as me so in Moonlight Rock the next day, whilst I opted for the "Mamma Cass" Burnt Pancakes, he went for the "Joe Strummer" Plate o' Grease which he polished off in double-quick time. The girls opted for French Toast (Gilly) and Some Sort of Salad Thing Which Shouldn't Be Allowed As A Breakfast Option (Fi). 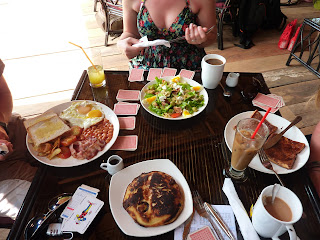 And then we hit the beach. Otres beach is lovely. I would never get tired of waking up and seeing that across the road. We stayed there for the day, eating at Dany's for lunch and tea. Unfortunately, Gilly got hit with some sort of stomach bug which knocked her out pretty badly so she slept through the evening. The next day, we headed to town as Fi had also picked up whatever the illness was, and was also suffering. Paul and I left them in Monkey Republic and high-tailed it to the local pharmacy where we were effectively fleeced of a small fortune by the smiling pharmacist for antibiotics and anti-emetics. Things weren't much improved when we then found out on our return that Fi was allergic to penicillin, amoxicillin, and most other medications ending in "cillin". On the plus side, the anti-emetic seemed to do the trick and settled their stomachs somewhat, and Gilly was feeling much better in the evening.

We decided to head back to the beach again with a couple of bottles of red wine in tow, for another evening on the sand after a meal at Dany's. I'm sure we could have found somewhere different for food if we'd wanted to, but when the grub is so damn good, there's not much point. On top of which, Dany's was home to a dog and her 4 ultra-cute puppies, so earned bonus points. There was also a very angry turtle nearby. 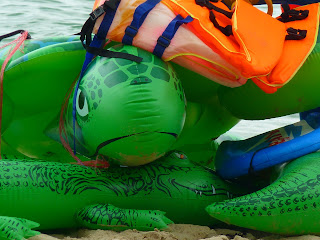 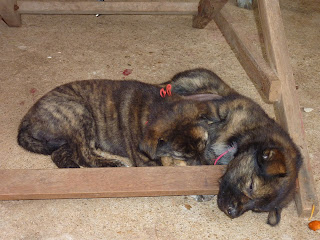 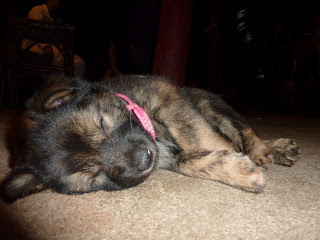 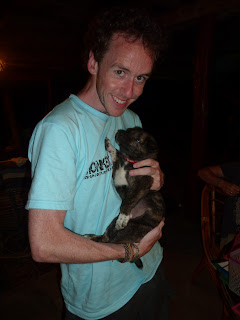 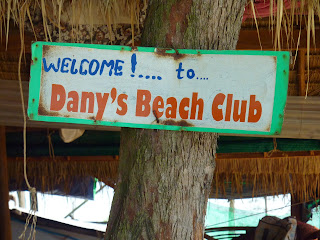 The next day started similarly, but we checked out of the bungalows. I had a chat with Sane, the guy running the place. He has grand plans which include, but are not limited to: adding an organic garden, planting mango an coconut trees, converting the centre hub of the bungalows to look like a tree by covering the wood with bark, covering everything in orchids, putting a pond in one corner with a bridge across it, serving traditional Khmer family dinners to guests, and much more. Whilst I was there, he had settled on a name - Otres Orchid. I'm fairly sure the price won't remain at $15/night once it's all in place. His staff include his niece and nephew, the latter I provided some on-the-fly tech support to as his laptop was having some issues, and he also wanted to get an email account set up and get onto Facebook. Sane's laptop also had a couple of problems, but I sorted them out too. It's good to keep your hand in.
We ended up back in town in the evening. We had to do a few "chores" (booking bus tickets, printing off the e-visas, etc). We had also booked back into Sunday Guesthouse, as the bus left from the tour shop at 7:15am and we wanted to be within walking distance in the morning, then headed into Monkey Republic for some pool. This soon turned into Torchlight Pool, as the electrics went out and the generator which was supposed to bring things back up didn't do its job, so I used the torch on my handy multi-tool (see also: opening wine bottles) to help us pot the balls. The girls claimed they got bored of playing in near-darkness. I maintain that they were outplayed by two professional pool sharks. 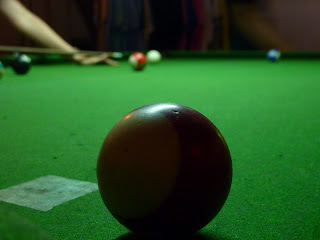 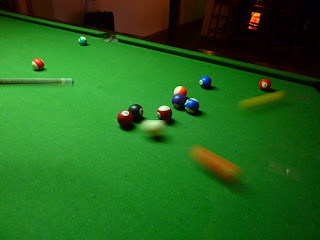 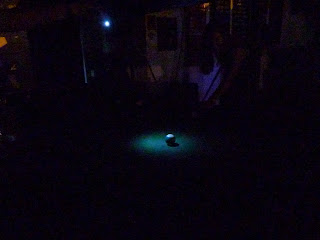 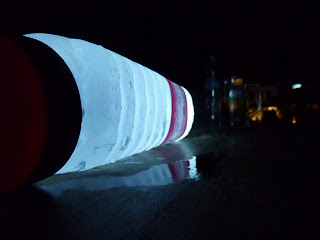 After a meal at Seahorse (Coca-Cola ribs? Yes, they do work), we took Paul and Fi to the excellent Sisters Bakery (the twin of one in Kampot, and apparently there's a third in Phnom Penh). I was starting to feel a little queasy so we decided to head back to Sunday Guesthouse for a relatively early (11pm) night. There had been a bit of panic as we thought the visa may actually have expired on the 27th which would have put us a day over, but it ended up being on the 28th, which was a relief. Unfortunately, my illness only got worse - it was clearly the same thing that Gilly and Fi had, with the added complication that I couldn't actually vomit because of my fundoplication. Being sick is generally your body telling you that it needs to get some bad stuff out of it now. When it can't do that, it's both frustrating and weakening. I was almost in convulsions as I tried in vain to retch up whatever it was that needed to come out, only for my newly tightened oesophageal valve to say "Erm...no." I had to rely on the anti-emetics to get through the night, which was punctuated at 3am by a nearby temple blasting out chanting from someone at breakneck speed over a microphone. It was so loud, he could have been just outside the room. This went on for three hours. I staggered over to the pack and managed to fish out some fairly ineffective earplugs (note to any traveller - invest in high-quality earplugs. You won't regret it). Then it was time for some temple music. This continued until we checked out at 7am, by which time I was fully awake due to the hot-water shower not pumping out any hot water. I was not in the best shape when we left, and matters were not helped by us getting to the tour shop at the allotted time, only for the bus transfer that was supposed to pick us up at 7:15am not arriving, and a food stall lady telling us that it had arrived at 7am and left. Unsure what to do, we hung around, mainly because the tour shop receptionist had been explicit that we should be there on time and that the pick-up would be outside the shop. Well, we'd got there 10 minutes early, and as the clock ticked closer to the main bus's leaving time of 8am, we were starting to sweat - not least because the sun was now up, and we were slowly being cooked outside the shop. Fortunately, the tour shop opposite also had people waiting outside for Trat, so we took a chance and decided to hang on. At 8:05am, the main bus actually turned up. This is one of the most frustrating things I noticed about SE Asia in general - you get given a specific time to be somewhere, and then are left waiting around for the best part of an hour, which could have been spent in bed. I like bed. I especially like it when I'm ill, and have only had 3 hours sleep due to a zealot on a microphone. Sometimes though, you have to carry on, so we said our goodbyes to Paul and Fi (who we'll be seeing again in the Thai islands in a couple of weeks with any luck) and got onto the bus for a 10 hour hell-ride to Trat.
Posted by Rob at 5:44 PM