I wasn't looking forward to Phnom Penh. So many people we'd spoken to said that, as a capital city, it was dirty, smelly, noisy, polluted and expensive. After 4 days here, I can confirm that it's all of these things.

The first day after arriving was spent hauling our bags around, desperately trying to find accommodation. This was the first time we'd actually had major problems just turning up in a place and getting a bed. We thought that the sheer number of hotels around would make things easier, but the area we picked (near the riverfront) seems to be really popular, and places were either full or out of our price range. We managed to bag a room with air con at Super Star Hotel, which was frankly a dive, but gave us somewhere to sleep for the night before I went exploring for better digs the next day. We discovered that Gilly had somehow lost her MP3 player between Siem Reap and here, most likely on the bus between Siem Reap and Battambang, and she'd only just noticed. So she is now musicless for the time being. We tried contacting the bus company, but predictably got nowhere - it's likely sitting in the pocket of a very happy passenger right now. That night we ate at Khmer Borane, which was nothing special and made us miss the excellent Khmer food of Siem Reap even more.

The next day after trawling around for half an hour, I finally found a hotel across the road (typically, I didn't discover it until I was almost back at the current place) which fit the bill. Hometown Hotel - lovely room, if a little noisy, air-con, decent size, and a bathroom large enough that you don't get the toilet seat wet when turning on the shower. I can't remember the last time we had such luxury.

The National Museum was first on the list of sights to see. It was a lovely building but only contained 4 galleries. Plenty of statues and carvings taken from the Angkor temples to preserve them and some were quite impressive, but removed from their natural setting I think they lost a lot of impact and the visit for me was a little disappointing considering how the guidebooks rave about the "fantastic" and "wonderful" National Museum. I was expecting a little more from a capital city's main history showcase. 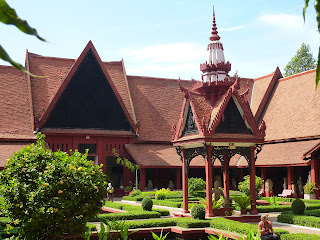 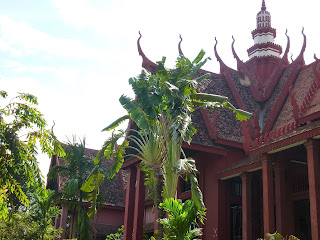 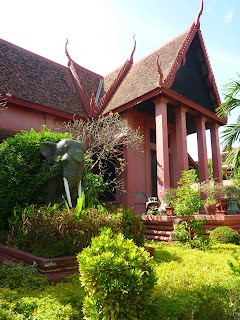 In the afternoon we strolled over to the Royal Palace which is adjacent to the museum. Another disappointment, this time in comparison to the palaces we'd seen in Bangkok. It looked like a poor cousin. Plenty of wealth on display of course, but the Royal Palace and Silver Pagoda simply weren't the breathtaking buildings I had in my mind. The Silver Pagoda has a floor made out of hundreds of pure silver tiles. However, you only see a few of them as the place is carpeted to protect them. Also, beaten silver panels look like aluminium, but without the lustre. There was a Buddha on display with over 2000 diamonds set in its solid gold body, and more silver and gold ornaments than you could count, but they lacked the finesse and ostentation of the treasures we saw in the Vinmanek Palace. A 600m mural depicting the Reamker (the Khmer version of the Ramayana) was spread around the courtyard, but was faded and badly in need of maintenance. Maybe if I hadn't been spoiled in Thailand I would have been less ambivalent about the place. 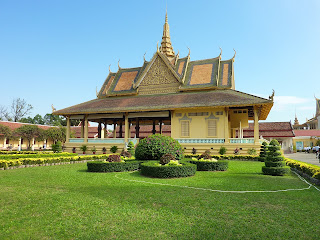 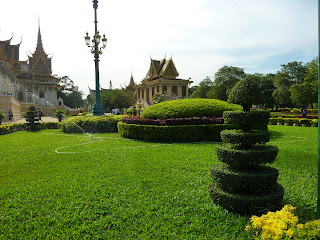 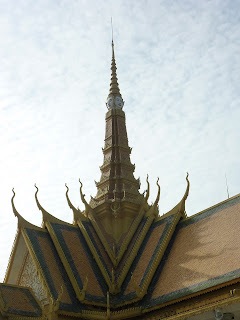 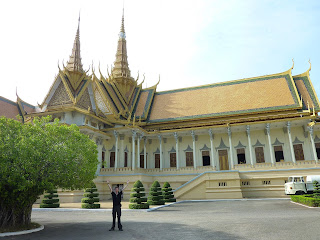 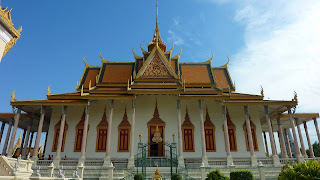 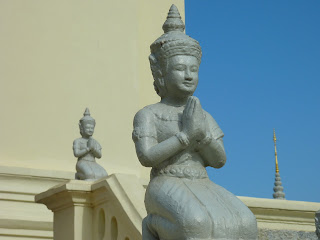 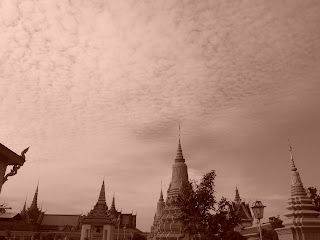 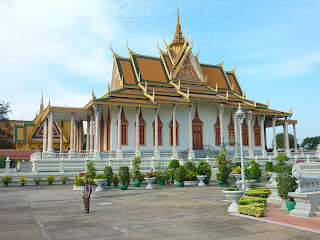 On leaving the palace we were treated to the Cambodian equivalent of a removal company. Ever wondered how Cambodians get a refrigerator from one place to another? Wonder no more. 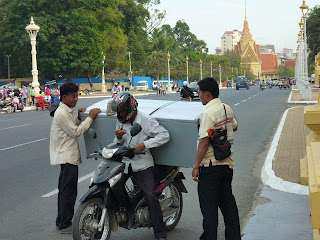 What's that? The photo must be fake? No-one in their right mind would attempt such a thing? Look at the video evidence, disbeliever:

Friends Restaurant was our dinner destination, recommended by Scott and Hannah, and excellent it was too. Their frozen raspberry and lime daiquiris are to die for. The food is in tapas form for the most part so we ordered 5 or so dishes between us and felt full and happy afterwards. Friends helps street kids turn their lives around and trains them in cookery, so whilst it's more expensive than other restaurants, it's all for a good cause and the quality of the food is superb.

The following day we headed up to the post office to send off some postcards. En route, we found a street gym and decided to give it a go. Gilly was particularly impressed with the "walky thing that doesn't appear to do anything". 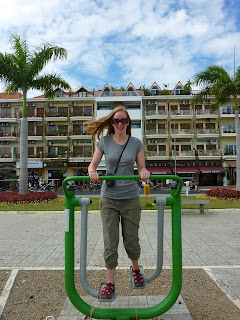 It was getting pretty warm towards midday so we stopped at Boddhi Tree cafe for a drink and played some cards. The owner spotted us, and asked if I knew any card tricks. I told him I knew a couple but was a little out of practice. Before I knew it, he'd dragged out the entire kitchen and service staff, and I was performing a trick in front of an audience of twenty people. 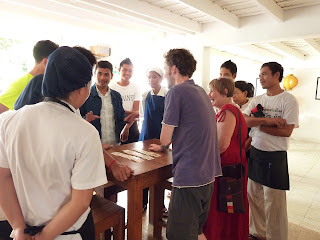 Thankfully, it worked a treat. Even better than that, the owner was so impressed, we got our drinks for free!

Afterwards, we decided to visit the Tuol Sleng Prison, also known as S-21. Formerly a school, it was converted into a prison under the Khmer Rouge regime. Thousands of people were led here for interrogation and torture under the sadistic eye of the prison warden Duch, and whose images can be seen around the prison. The majority of these people would eventually be killed on the site, or - when the sheer number of people to kill became too great - marched to the nearest killing field, Choeung Ek. Also in the prison are beds where decaying bodies were found of the last few prisoners killed before the Khmer Rouge fled the Vietnamese, mugshot photographs of huge numbers of people that passed through the prison (like the Nazis, the regime was thorough in its documentation of extermination), and information on the current fate of the regime's leaders. With Pol Pot dead some years back, only a few leaders remain awaiting trial. Warden Duch was already sentenced to 30 years imprisonment after admitting his part in the atrocity. The others all deny any involvement. The trial is due to start this year, but whether that happens remains to be seen. Until it does, the country has no closure.

The prison itself could do with some maintenance. From what we've read, a large portion of the entrance fee goes into the pocket of the son of a high-ranking government minister who owns the place, and he is letting the place decay. Aside from a few rooms of photos and pictures and a documentary film, it's sorely missing any sort of detail. 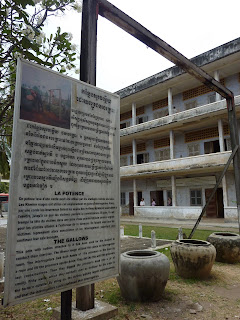 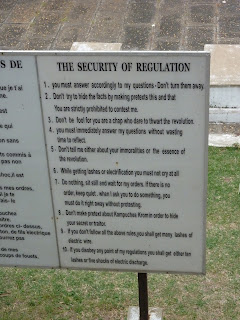 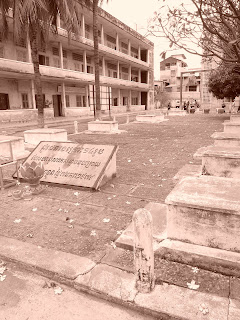 I knew practically nothing about the Khmer Rouge period before coming to Cambodia, and now, even after all I've seen, I still can't understand it. I'm not alone: every local I've spoken to has lost someone during that time, and none of them have any idea why the slaughter happened. Civil war alone is awful, but this was particularly mindless and the hypocrisy of the perpetrators is beyond belief. Pol Pot and co. were university-educated, yet declared that education of the masses was evil, and that the farmers should rule the land. Of course, this was all rhetoric and the farmers were as likely as any to be exterminated.

The following day was the other half of the history - a visit to Choeung Ek, one of the most notorious Killing Fields in Cambodia. Today it has been turned into a peaceful, if sombre, park of sorts with an excellent guided tour narrated by one of the survivors of the regime. We saw up close the areas in which atrocities were committed, as well as the mass graves that hundreds of bodies were exhumed from after being driven here from S-21 prison. Some of the graves still remain untouched, with authorities deciding to leave the bodies in peace. One grave contained only women and children. A tree near this grave was named "the killing tree" and earned its awful name: babies were swung by their legs and had their heads smashed against it in order to silence them, before throwing them in the pit. Sometimes you come across something so sickening that you simply cannot comprehend how it could even occur. This could be said for the Khmer Rouge's entire regime. Another tree was known as the "magic tree", and a loudspeaker hung from it playing loud martial music to drown out the screams of the people being murdered.

Today, there is a monument in the centre of the park, containing the bones of some of the bodies found there. Rather than being a gruesome spectacle, it's just incredibly sad; most of the people killed there will never be identified and many local people come there to pay their respects. It was a worthwhile visit, and certainly shows how much the country has tried to put its dark past behind it. 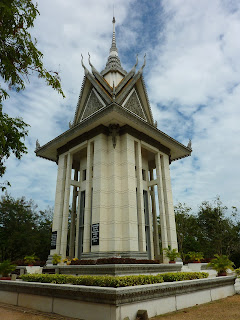 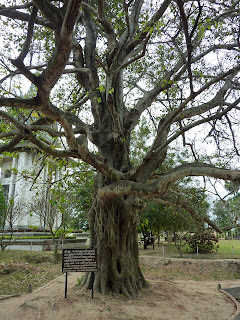 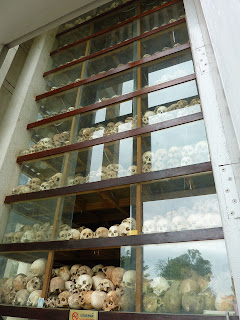 Feeling rather maudlin, we stopped at Black Canyon Coffee on the way back to get a late lunch (great Thai food) before heading on to the Foreign Correspondents' Club. Much is made of the FCC, but at the end of the day it's just a bar with temporary photograph exhibitions, albeit a bar with great cocktails, a great view and a happy hour which was definitely required. Geckos on the wall kept us entertained as they munched on the hundreds of flies hovering around the lights on the ceiling. Those guys move fast. 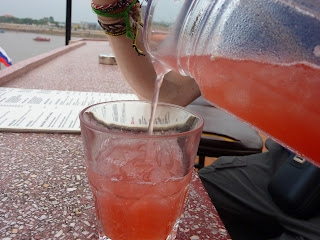 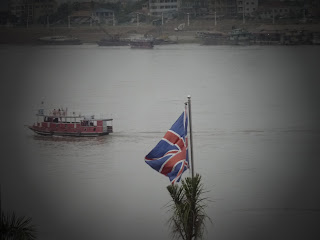 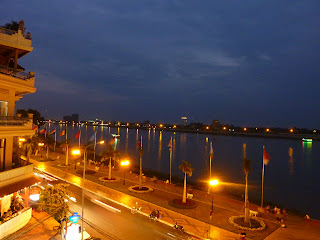 We had one more full day to kill in Phnom Penh, so we headed over to the Sorya Centre - the biggest mall in the city. Unfortunately we couldn't get Gilly a replacement MP3 player at a reasonable price, unless we wanted to get a fake Chinese export. Singapore may be a better option for choice and quality. For our last meal we went back to Friends Restaurant, and I went for a Burmese curry off their full menu rather than tapas. My goodness, it was incredible. I've not had such a good curry for months, probably not since Thailand. Myanmar is now firmly on our list of places to visit next time around. 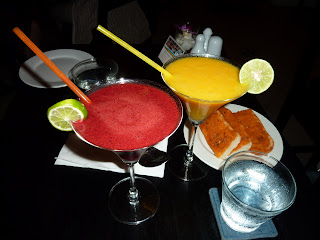 Overall, I think Phnom Penh was my least favourite city. I liked it even less than Ho Chi Minh. The constant hassle from tuk-tuk drivers wore me down, and it just wasn't a particularly nice place. I had a game with Gilly each day to pass the time between walks, where we'd bet how many times we'd get offered a tuk-tuk. One day, we got to 42. People there really don't like you walking around. It's almost inconceivable that you might use your feet to get from one place to another.
Our tourist visa for Thailand arrived back in the evening, and we booked a bus to take us to Kep the next morning. I didn't think there was much to do in Kep but there were a couple of reasons for going. 1.) There's not much to do in Kep. "Downtime" after rushing around a city for the best part of a week is always good. 2.) The crab is reputed to be amazing. I have superlatives at the ready in preparation.
Posted by Rob at 4:16 PM