The bus ride was comfortable and uneventful, and we arrived at around 7pm in Siem Reap. After a tuk-tuk ride to a road with a load of guesthouses on, where the tuk-tuk driver was very keen for us to stay at his brother's hostel, we ended up choosing Golden Takeo for the night. Aside from the overpowering smell of air freshener, the room was clean, cool and comfortable. We soon found out that the internet speeds in Cambodia are nowhere near as good as in Vietnam, and coupled with a wireless connection far from the router, we only managed to get about 10 photos uploaded overnight.

The next morning we had breakfast on the terrace, and enjoyed a free "fish massage". For some reason, fish massages are all the rage in Cambodia. For the uninitiated, a fish massage involves you putting  your feet in a tank of hungry fish, who proceed to nibble away the dead skin on your feet. That's the idea, anyway. In reality, it's a bit of an odd sensation which doesn't appear to pedicure your feet in any way. It hasn't stopped the bandwagon from rolling on though - there are literally dozens of places in the centre offering fish massages, some chuck in a beer to enjoy with it.

We moved down the road to Prohm Roth Inn, after circling the block of other guesthouses, most of which were full or only had fan rooms. The temperature in Cambodia is significantly hotter than Vietnam, and air-con is pretty much essential after a day in the baking heat. The guesthouse was run by brothers, and they couldn't do enough for us.

I'll be honest: I wasn't looking forward to Cambodia that much. Out of everywhere we'd planned to travel on our trip, Cambodia appealed the least. It was probably my western ignorance thinking that it was a dangerous, under-developed hole with a few tourist spots to strip foreigners of their cash (and sometimes belongings). I was pleasantly surprised then, to find Cambodia is actually a really beautiful country and the people are amongst the friendliest and most genuine of any country we've visited on our trip. It's good to have preconceptions smashed to smiling bits every so often.

We took a 15 minute stroll into town, and changed our remaining Vietnamese dong into US dollars. Cambodia appears to work primarily with the buck, and only uses its native riel for loose change (anything under a dollar) which is based on the US conversion rate at the time. All of the prices in supermarkets, restaurants and guesthouses are in dollars. For the most part, this means that a lot of things (such as water) are relatively more expensive in Cambodia than other SE Asian countries, but food can still be found as cheaply or as expensively as you're happy to pay.

Our first taste of Khmer food came courtesy of Khmer Kitchen, recommended to us by Tom and Holly. The national dish is called amoc or amok and is a type of fish (or chicken) dry curry mixed with a kind of paste made from onions, cabbage, beansprouts and egg, then served in a banana leaf. It's really rather good. The other dish they do (which Gilly went for) is a traditional Khmer curry, which is similar to a Thai curry but much less spicy and just as tasty.

Siem Reap is Cambodia's fastest growing city, thanks mostly to the attraction of the Angkor heritage park which hosts dozens of temples of various shapes and sizes. The most famous of these, only 6km away, is Angkor Wat, with adjacent Angkor Thom dwarfing that. However, there is a well-established route around the "main" (read: most interesting) sites which you can take in a tuk-tuk. Angkor passes come in 1-day ($20), 3-day ($40 - 3 visits within a week) and 7-day ($60 - 7 visits within a month) flavours, and allow you to pick and choose the days you go.

The town itself has a main hub of activity circling "Pub Street" which, as the name implies, hosts more bars than you can shake a beer glass at, along with a plethora of decent places to eat. Alongside "The Alley" which runs parallel, you will have no problems finding nightlife, food, or fish massages. Supermarkets abound, as does street food and markets, both day and night (I counted at least 5). Unfortunately, the shadow of poverty is all too apparent, as is the impact of the Khmer Rouge. Street children prowl the tourist areas, selling postcards, books and general tat - you are strongly advised not to buy from them, as they are usually controlled by unscrupulous adults who have removed them from school, and see practically none of the profit - as do landmine victims who have been maimed and are missing legs, arms, eyes or all three. Selling copied books and art seems to be all they can do to survive, and they will come into restaurants to ask you to buy from them.

We'd decided not do too much on the first day, as we wanted to laze around and enjoy the sun and the (relative) lack of pollution after Ho Chi Minh City. On the second morning after a great breakfast at Prohm Roth, we moved to our pre-booked accommodation - Angkor Wonder. This is run by a legendary owner named Mr. Why Not, so called because that is his de facto response to most questions. In fact, he was one of the most accommodating hosts we'd met on our travels. We took the afternoon to look around the relatively expensive Angkor Museum, which looked to be recently developed and was very well laid-out in a lovely modern building. We spent a few hours there, but the audioguide is recommended, otherwise you'd zip through it a lot quicker.

We decided to get a 3-day pass for Angkor, which also allows you to get in to watch the sunset for free on the night that you purchase it. Unfortunately, this was a complete bust. The ticket booth opens at 4:45pm and the entry to climb either one of two temples to actually get a view closes at 5:30pm. The queues of tourists are so long that we didn't even get near the entrance before we had to turn back. It seems a little ill-conceived, and a bit pointless to let people into the park on the same day since they'll have trudged half an hour for no reason. Feeling a little dejected, we got a tuk-tuk back to central market and found Father's Restaurant, where we had some more great Khmer food before calling it a night.

New Year's Eve arrived, and we decided to visit some of the more remote attractions included in the Angkor pass: Kbal Spean, and Banteay Srai. We took a tuk-tuk with one of Why Not's drivers, Sam, who had taken us to the sunset debacle the previous evening. He's a quietly spoken man, whose father was killed during the Khmer Rouge atrocities, yet he has a quiet dignity about him which is indicative of a lot of Cambodians we've seen.

Kbal Spean is a carved riverbed, apparently unique in the world, which has a number of religious images etched into the rocks around the river and in the river itself. It leads onto a waterfall which is unfortunately not big enough to swim in, but is good if you fancy a cool shower. We didn't. It already takes 10 minutes to cover ourselves in suncream, and we really didn't want to go through that process again! The fact that the riverbed remained fairly undamaged despite the constant flow of water is testament to the design of the images: 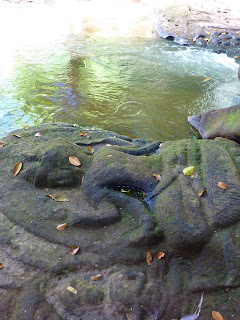 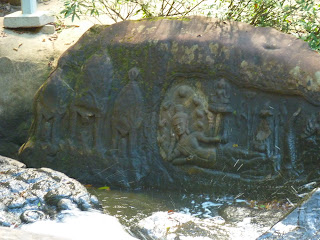 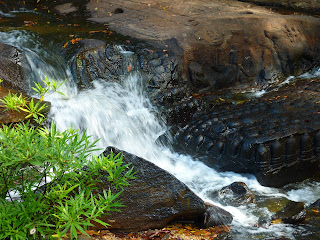 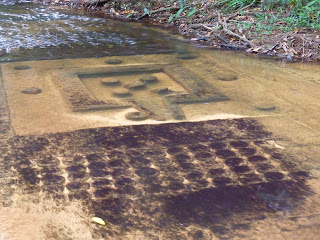 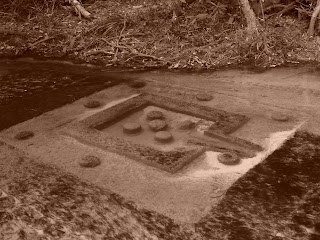 Banteay Srei was our first proper temple and was small, but ornately carved. It was built in the 10th century, and roughly translates to "citadel of the women" due to the detail in the carvings.  It's hard to show the intricacy of the carvings in the temple in a few photos, but I will give it a go: 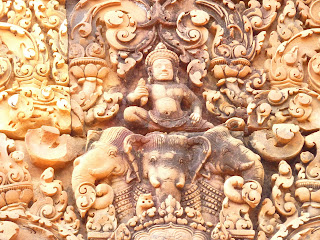 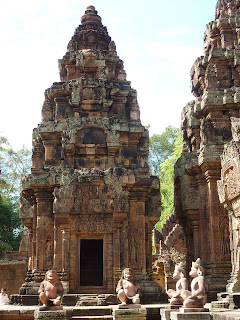 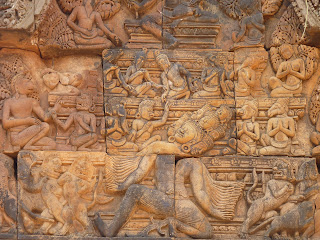 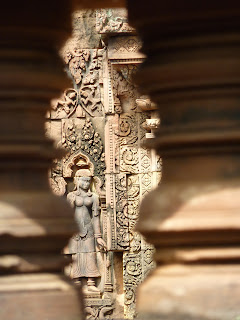 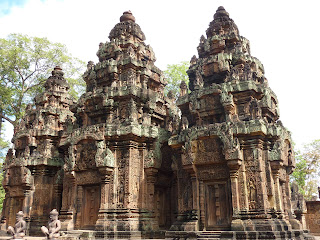 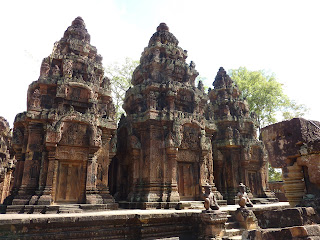 Looking back, I think this is the most detailed temple we visited on the circuit.

In the afternoon we fancied a change, so we visited the Landmine museum. This is run by a former Khmer Rouge child soldier called Aki Ra who planted hundreds of mines when fighting for them, only to defect and spend his life up to now undoing what he did and de-mining the country. He has also turned the grounds of the museum into a home for 20+ children who have been affected by landmines either directly or indirectly.

Afterwards, we went to the Angkor Butterfly Centre, an interesting diversion from anything we've done so far. I remember visiting a butterfly farm when I was in school (I believe it was called Countryworld in Shropshire, but I may have made that up) and loved it, so this was a real nostalgia trip for me. We got to see quite a few different species, as well as being taken around by a very enthusiastic guide who showed us the various eggs, chrysalises, caterpillars and species dotted around the place. It made for a very enjoyable hour and we got some excellent photos. 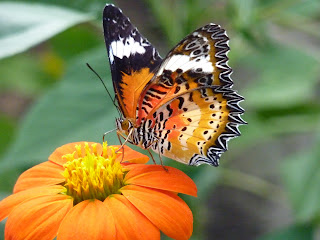 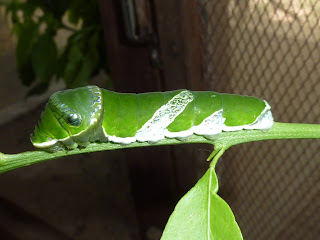 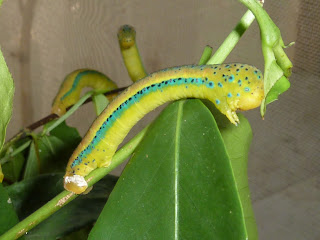 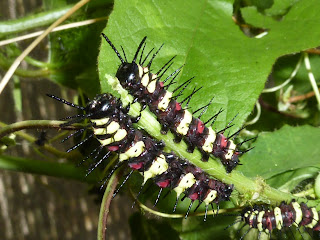 We got back to Angkor Wonder for about 5pm and found that Mr. Why Not had put on a party for all of the guests. There was food and drink all round, including more amok, fried chicken and mushrooms, rice, and most importantly: beer. The national beverage is Angkor Draft (on tap) or Anchor (in bottles or cans). Both are fairly decent. Even Gilly is getting into beer now, words I never thought I'd write. There was one extra food item we got to try - fried spider. It tasted a bit like crispy chilli beef, but a little chewier.


Apparently I had something stuck in my teeth: 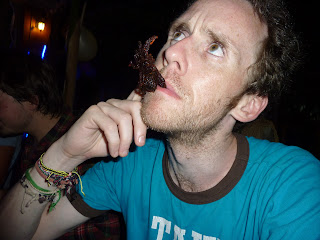 Oh, it must have been the huge spider. 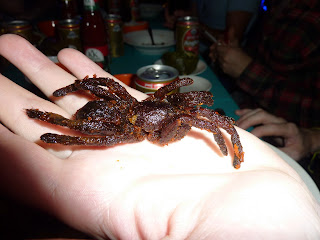 The Angkor Wonder guests and staff: 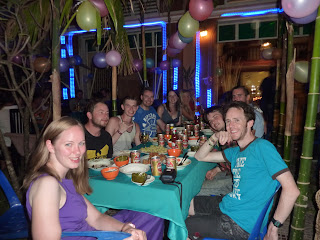 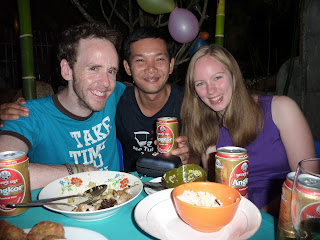 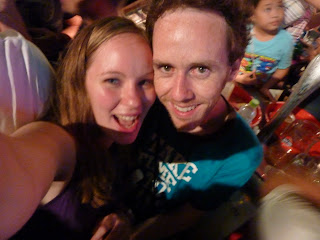 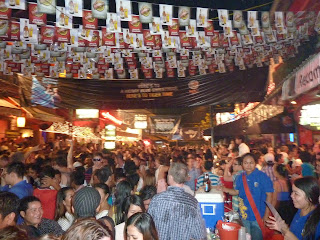 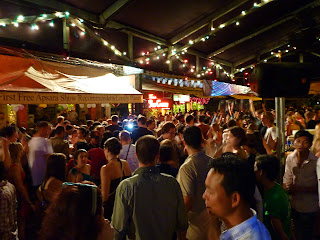 After a few hours of merriment, it was past 11pm so we decided to head to Pub Street. The road was chock-full of people, Cambodians and tourists alike. Water and beer was sprayed everywhere and everyone was in a fantastic mood, as well as being universally inebriated. The sound system in the street counted down to 2012 and everyone went berserk. If we weren't drenched beforehand, we soon were! There were no fireworks as such, but a few people had some interesting little sticks (for want of a better word) which fired out a series of sparks. I felt so happy we'd decided to come to Siem Reap rather than Phnom Penh to celebrate.

Moving on from the street, we headed over to Red Piano for some new year cocktails and 80s and 90s tunes to dance to, much to the amusement of the locals. I don't really remember what we did there, but the next time I looked at my watch it was 3am. We went back to the hotel via a supermarket (Pringles were essential to fend off hunger, and for some reason I thought it would be a good idea to buy a cigar in a tube) and then crashed out.