Our penultimate stop up the west coast was Portland, Oregon. It felt very much like Bristol but with even more hippies, arty types and bohemia. We'd arrived mid-morning after setting off from Salem with a full stomach thanks to Laura, but since everyone knows that sitting in a car not moving can burn up immense calories, we were feeling pretty hungry by lunchtime. We'd been kindly offered a place to stay by a Couchsurfing host called Raine. After parking up not far from her road, we decided to look around the nearby area as there was a market on. I can spot a wine stall at 200 metres, so immediately made a beeline for it. 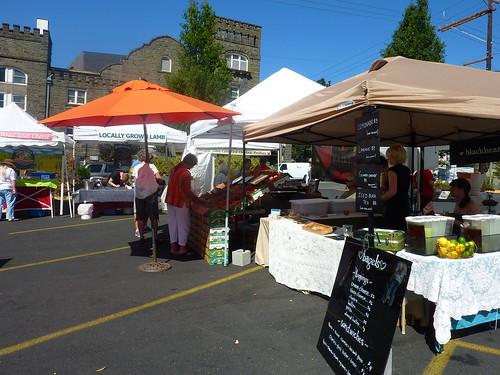 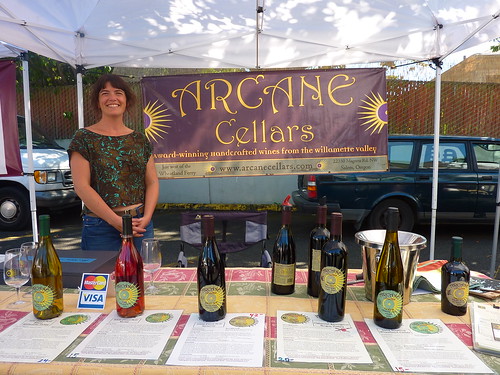 All of the wine was locally produced, but Oregon isn't really known for its wine-making and we'd been spoiled in California so while the alcohol was lovely, the taste wasn't a patch on what we'd had previously. Still, it helped make the next half hour a little more bearable, since this is where we ran into a bit of a hitch.

After marching up and down the road trying to find Raine's place, we realised the address was actually a dilapidated building we'd wandered past several times. We'd just ignored it because surely, surely, it wouldn't have been our destination? It was.

Things got worse when we walked up and found the door wide open with people milling about in the hallway. We chatted to a girl who wasn't Raine and told her we'd arranged to stay. She took us up two flights of creaking stairs into what looked like an abandoned renovation. The place was a wreck. There were barely any walls, the rooms were separated by sheets (including the bathroom), and the bedroom was just a large open room with some filthy mattresses strewn about. The kitchen, such as it was, lay filled with grim-looking dishes. The people mooching about in the bedroom looked like they'd taken whatever pharmacopoeia they'd managed to get their hands on, and then collapsed in a dazed heap.

It turns out that we'd actually arranged to stay in a squat.

We'd slept in some rough places on our travels, but Green Park in Bangkok and Chaloklum Bay Resort in Ko Phangan were nothing compared to this. We told the girl we were heading out to our car to get our luggage, got in, and drove off.

We now had nowhere to stay for the night and were on the cusp of resigning ourselves to a pricy motel out of town, when we decided to give CouchSurfing one more go. We hit a cafe, snagged some free wi-fi and got in touch with another lady who'd offered us a place but who we'd turned down due to already accepting the first offer. Somehow, we managed to get in touch with her, and after one incredible Skype call later, we were booked in to stay with Emily. She had just moved house, to the point where she had barely any furniture and was still in the process of shifting her stuff. Despite having no bed to offer us, Emily went out and bought a queen-sized inflatable bed for us. Not a mattress, an actual bed. The generosity of strangers on our travels never failed to astound. Emily was a campaign manager for a responsible living site, which made complete sense given that she'd just put her trust into two random foreigners to stay in her new house.

Since we could now rest a little easier, we headed out to Portland to a local park to pick up some food from a Vietnamese cart. Emily had to head out but met us later in the evening. 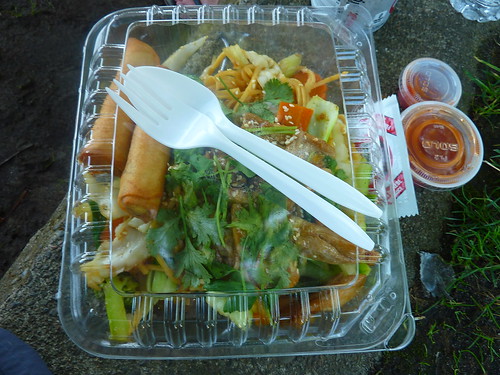 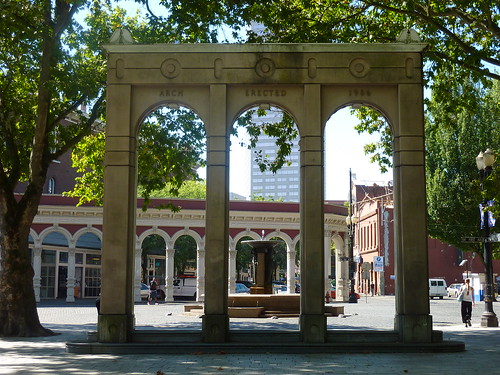 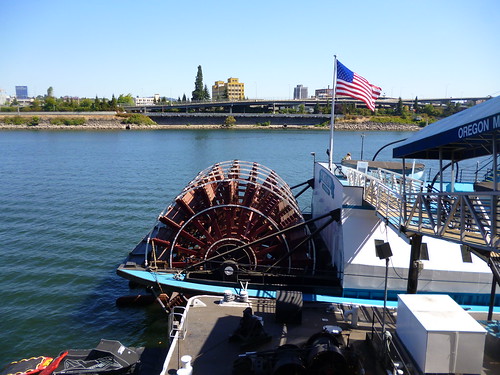 On the first Thursday of every month there is an arts event in Portland's Pearl District. Art galleries stay up late, pop-up galleries and food places abound, and the vibe in the area is wonderful. Emily took us around a few places, and we somehow stumbled into the launch party of a children's educational show/media experience/interactive thing called The Digits. They are apparently pretty big. 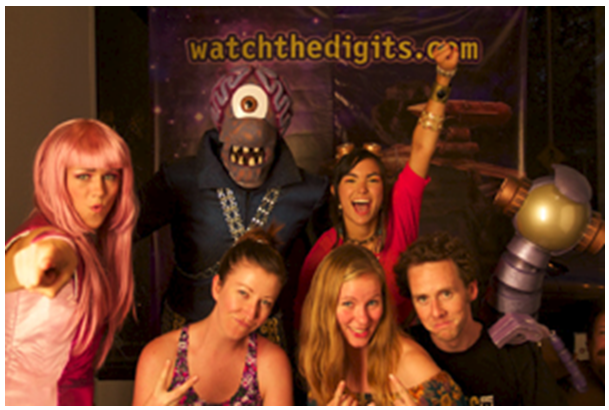 We then made the mistake of walking into Powell's Books. This is the biggest bookstore I've ever seen. Floors and floors of new and second-hand books of all types are overflowing from the shelves. I could have spent months in there. We managed to lose each other at least three times, and an hour or two later we dragged ourselves out for food and beer at Deschutes Brewery, where I had some truly excellent ribs. 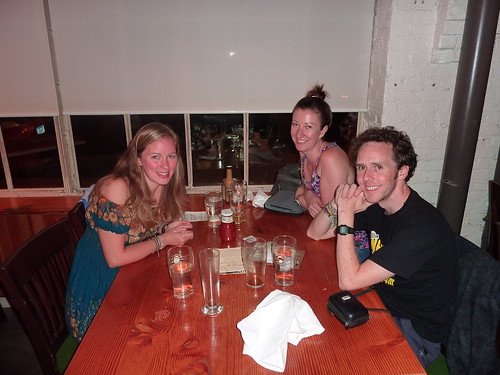 That evening we cracked open a bottle of Zinfandel and watched The Descendants. Not the happiest Clooney movie we've seen, admittedly.

After a fantastic night's sleep on the newly inflated bed, we were ready to hit the nature trail. Columbia River Gorge is east of Portland and encompasses hundreds of thousands of acres of amazing scenery. We visited three waterfalls in one day: Multnomah Falls (bigger than Niagara, smaller than Yosemite), Wahkeena Falls and Fairy Falls. 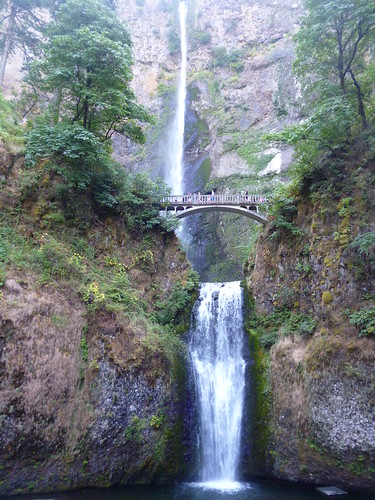 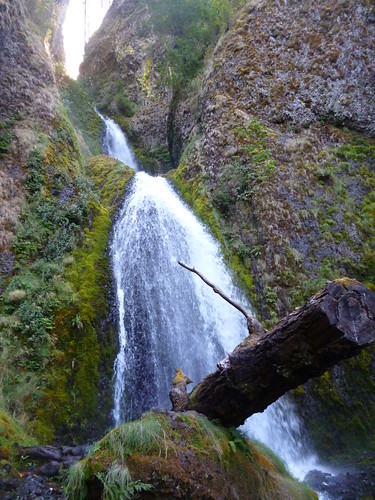 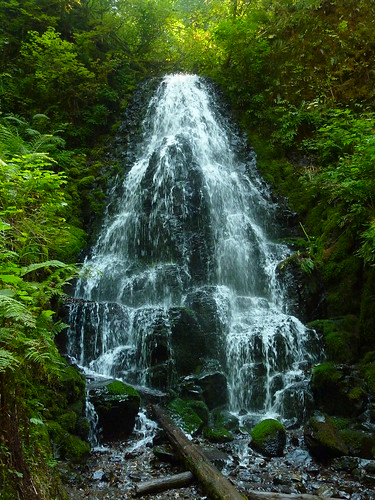 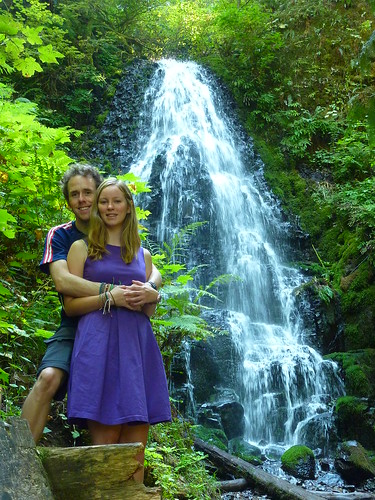 Fairy is the prettiest, Multnomah the most impressive, and Wahkeena suffers from middle child syndrome, but since you're going past it anyway, it's worth a look. To get to all three, you start at Multnomah and head to Fairy - it's around 1.7 miles, so it's easily doable there and back in a couple of hours. 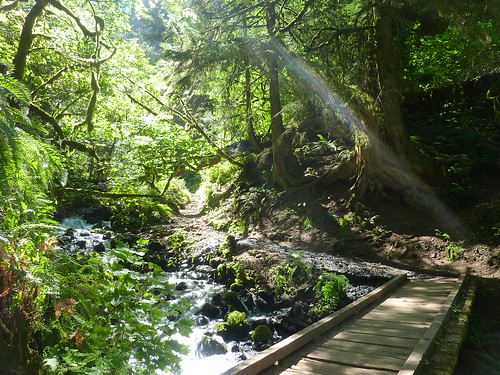 We headed back to Portland after our excursion, and loaded up on carbs at Pastini Pastaria, an Italian chain serving superb garlic bread, grilled chicken salad (Gilly) and spaghetti with spicy sausage (me). 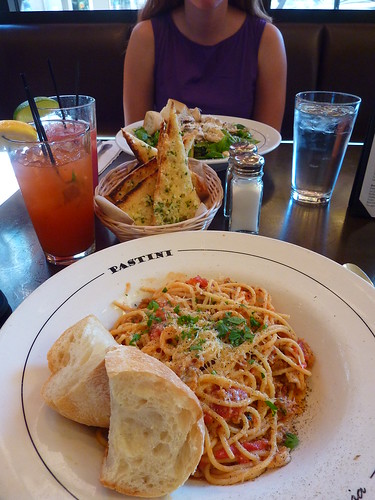 We clearly didn't get enough art the night before, so after lunch we set out for more. A nearby gallery contained a contemplative chef, and a colourful exhibit by Mike Kelley which seemed to be a scale replica of Krypton, only a bit more fabulous. 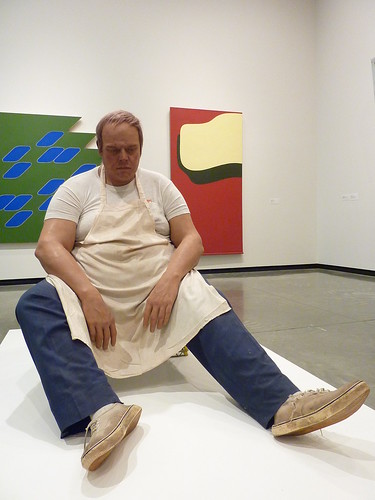 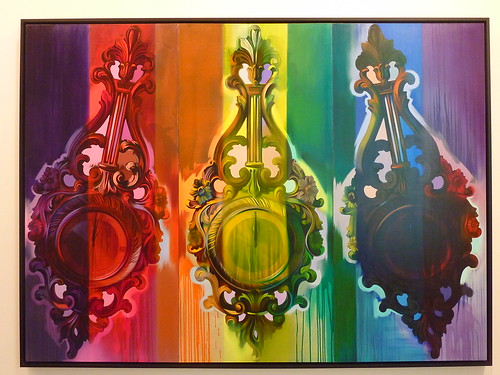 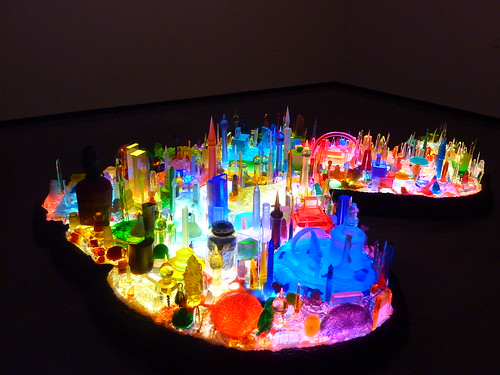 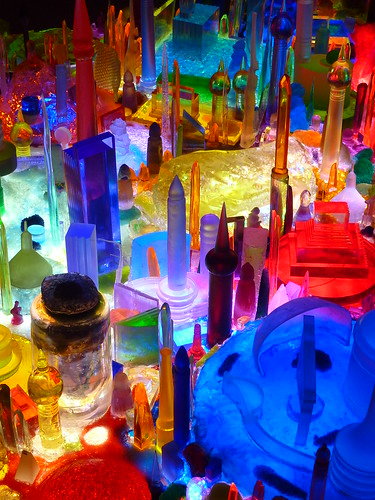 In the evening we'd suggested to Emily that we should go to a comedy gig. Emily had never been to stand-up comedy before, so it was nice to be able to share some of our passions with her. At Helium Comedy Club that evening the line up was Alex Lopez, Shane Torres and the headliner Chris Fairbanks, who was excellent.

What could have been a pretty routine stay in a wonderful city was saved by a heroic CouchSurfer stepping in and saving the day. Having a local show you around is so much more interesting than wandering the streets with a map, and we were fortunate to have met such a lovely person. I'd be remiss if I didn't also mention that Emily is the singer in a band called Urban Wildlife, who have recorded a variety of lovely songs on two (soon to be three!) albums. Check them out here:

Our final stop on our road trip was Seattle, where we'd arranged to stay with a fine chap named Raph, who we confirmed definitely didn't live in a squat.
Posted by Rob Kershaw at 4:41 PM