We got up to a breakfast of cake, tea and Frosties, sugar being the order of the day. After moving out of our room and leaving our bags to be put into a much cheaper dorm, we joined Fugu tours with five other people for the start of a 400km round trip. Our guide Thaniel really knew his stuff and provided an entertaining commentary throughout the entire day without flagging (unlike us, who grabbed naps between quiet bits).

Trelew was founded 150 years ago by Welsh miners. The area is a bush steppe, a semi desert, and water shortages are a big problem. In Puerto Madryn the main industry is aluminium, with one factory employing over 5000 people and producing 470,000 tons per year. Japan is a big buyer; it's likely that if you own a Toyota car the aluminium came from here. Before the area was designated as a protected site pollution was a huge problem. Now there is less than 2% pollution per year. Fishing and tourism are the other big industries (300,000 people per year visit Puerto Madryn) and more people are moving to the area each year - Thaniel believed it averaged seven per day.

The roads around Peninsula Valdés aren't particularly exciting, mostly gravel with scrub on either side punctuated by estancias (ranches) where gauchos live. They're like Argentinean cowboys, except with sheep rather than cattle. They can shave a sheep in two minutes - the record is one minute 25 seconds in Argentina - and there is enough wool on one sheep to make $25. The biggest estancia has 50,000 sheep. Time is literally money, hence why speedy shearing has become an art.

Our first stop was an excellent visitor centre which provides information on all of the animals in the peninsula. Bad timing meant that whales were off the agenda (they leave in December), but we were looking forward to seeing elephant seals and sea lions. En route there were plenty of guanacos to spot, an animal in the same family as the llama. They can spit up to 10m at considerable velocity, but the entire park is built around a culture of preservation so it's prohibited to get out of your car to take photos (snapping from the window is fine). It's heartening to see a conservation project like this, which hasn't sacrificed the natural ecosystem for the tourist dollar. 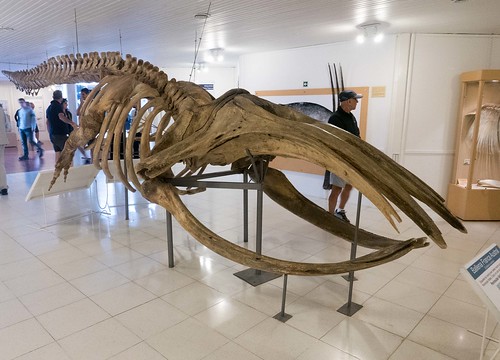 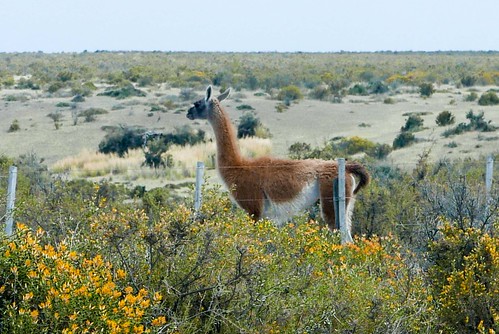 When we arrived at the next destination, Puerto Norte, we were surprised by a long-haired armadillo wandering across the road. Too quick for us to snap it unfortunately, but a nice bonus nonetheless. A walk to the viewing platform presented us with a colony of both elephant seals and Antarctic sea lions living happily together. It was the start of the breeding season so we also got to see a few pups here and there. Stop three was Caleta Valdés, where there was a small penguin colony. We had the choice of doing either this tour where we would get to see a bigger variety of animals, or Punta Loma which housed a huge penguin colony. We opted for the former; decisions like this are always tough when travelling - there are so many things to see but never enough time to do everything, so sacrifices need to be made. On the plus side, we got to see plenty of Magellan penguins here along with their chicks which made Gilly very happy! 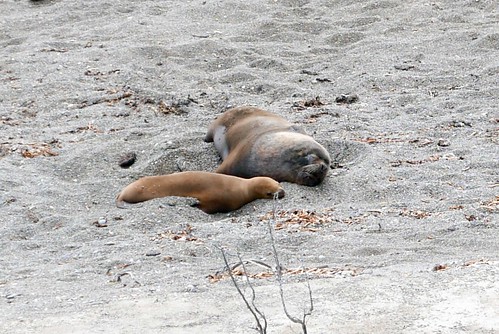 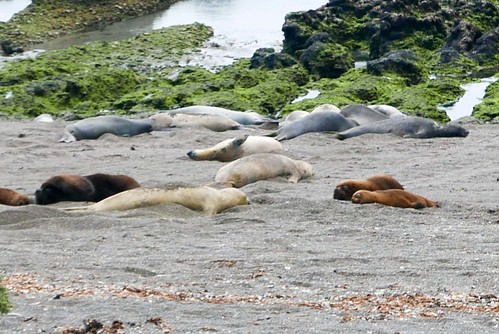 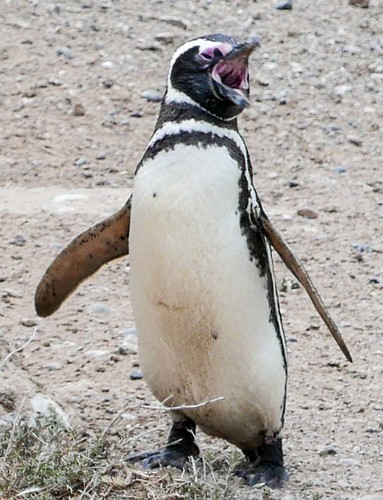 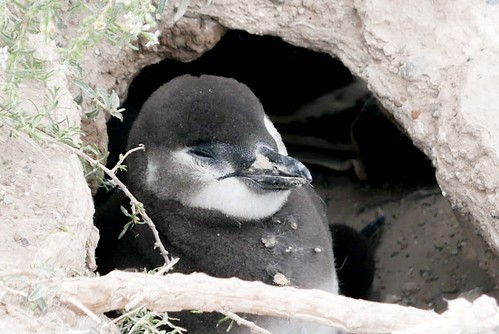 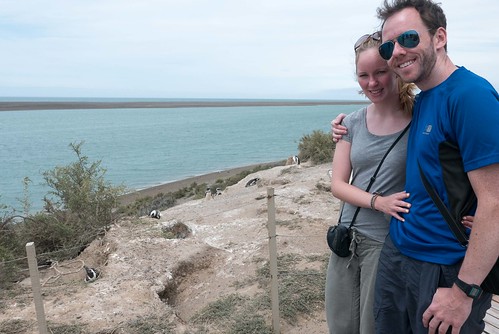 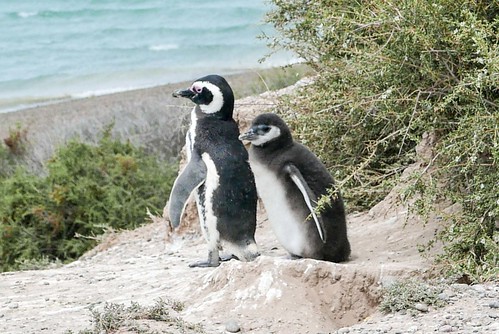 Next up was Punta Cantor, which wasn't quite as exciting; just a few elephant seals dotted around. En route though, we got to see a Patagonian mara (an odd-rabbit-like thing which looks almost like a mini kangaroo), and a burrowing owl. There's a shipwrecked schooner called the Lolita here which can be seen at low tide (it wasn't when we were there). However, on the way to our final stop of Punta Pirámide, we got chatting to an American couple who had been to southern Patagonia. Everyone we'd spoken to on the trip who had been there had raved about it, and we'd pretty much discounted doing it due to time/travel constraints. Now though, with a bus to Bariloche due to be booked imminently, we changed our minds. It sounded like a few days split between El Calafate (for the glacier) and Chaltan (for the hiking and scenery) would be the best use of time, so we endeavoured to look into what would be needed to change our plans when we got back in the evening. 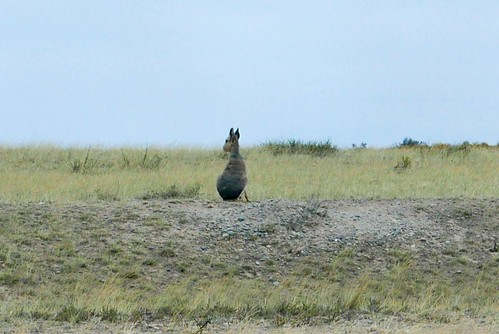 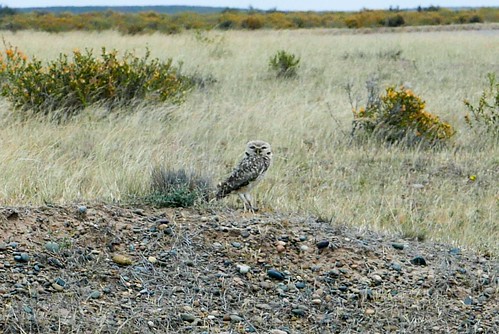 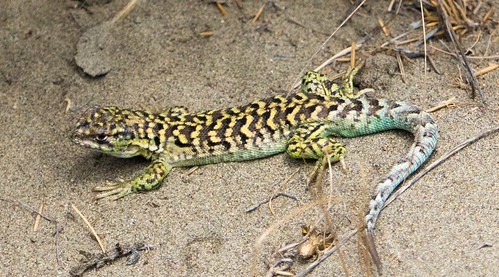 First though was Punta Pirámide, A hippy little surfer town with five hundred inhabitants. It was almost 4pm, we'd not had anything more substantial than a bag of crisps since breakfast and we were absolutely starving. The guide recommended a restaurant but after looking at the menu we decided to go for something a little lighter elsewhere, and shared some empanadas and a milanesa at Bottazzi next door. Apparently these guys are good for whale watching...we might find out at some point in the future. There wasn't much else to see in the town in truth, it's geared towards feeding pricey food to surfers and the beach is pretty naff. Since the tour was over, we piled into the minibus and headed back to Puerto Madryn and our hostel.

Due to the New year, Rodrigo had put the price of a double room up to 700 pesos (£35) from 550, which was already at our top end, so we moved into a dorm instead which seemed spacious and comfortable enough for one night. After trying to navigate the almost impenetrable omnilineas bus website to work out how to get to El Calafate and then to El Chaltan, we worked out it would cost us a fortune in buses, take ages to move between places (at least two fourteen-hour buses), and there was no guarantee we'd be able to leave for Bariloche when we wanted. A trip to the bus station was even less help - despite there being numerous companies all advertising trips to these destinations, you can't buy a direct ticket. Instead you have to buy a ticket for the first leg from one company and then a ticket for the second leg from another. And due to the queues at each line, you had no idea if there would be any tickets left when you got to the second company. Furthermore, because El Calafate and El Chaltan are so remote, they can basically gouge visitors in pretty much every aspect: travel, accommodation, food, and so on. In the end we decided to put Patagonia on our list of places to come back to in the future, and returned to the original plan of going to Bariloche the next day. We went out for a meal at La Taska which was filling but not exceptional, then headed back to our dorm.

After breakfast, we went straight to the bus station and an hour later we had two tickets to Bariloche, which seemed to be far simpler to obtain: one fourteen-hour overnight journey, with the same kind of bus that took us to Salta (it seems that fully reclining seats are a luxury and sell out pretty quickly), and it was leaving at 9:30pm that day. That left us with a decent amount of time to fill, so we took a trip to the oceanographic museum housed in a lovely building on the outskirts of town. It's set over four floors and has plenty of interesting information charting humanity's relationship with the sea from the early settlers until today. Most of it is in Spanish but Google translate helped immensely. A long lunch at Bendito Viento provided us with the first thin and crispy pizza we'd had since setting off; it seems deep pan is more popular here than back home. It's also worth noting that my glass of white wine cost less than Gilly's glass of orange squash. It's almost like they WANT you to drink. 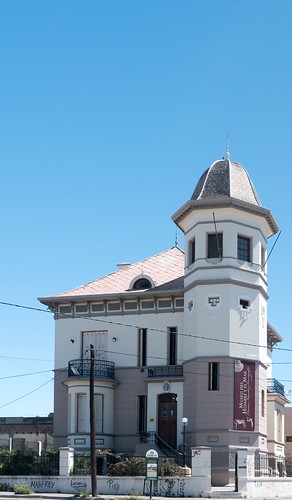 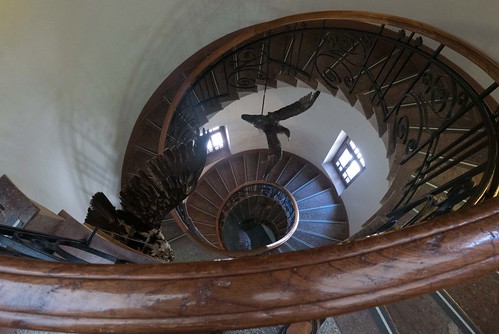 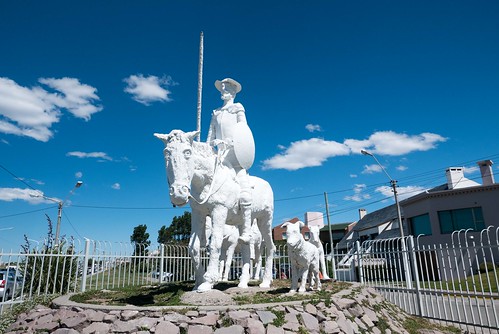 With still more time on our hands, we decided to head to the Ecocentro 5km out of town. It was a hot, tiring walk along the beachfront, but we made a doggie friend on the way. We arrived to find it only opened from 5-9 each day, except when tour boats were docked. I'm not sure how they make their money back for four hours a day, since the centre is a modern, fairly high tech building by Argentinean standards, and at 125 pesos entry the price reflects it (the previous museum costs 10 pesos normally, free on Mondays). We must have seen twenty other people at most while we were there. It's a dual language experience, lots of interesting displays about the whales and other wildlife in the area, as well as a couple of auditory rooms where you could listen to whale sounds. In one room, you could lie down and feel the vibrations from the whale song pulse through your body. Pretty fun. 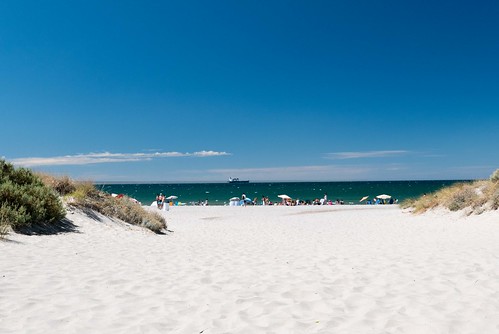 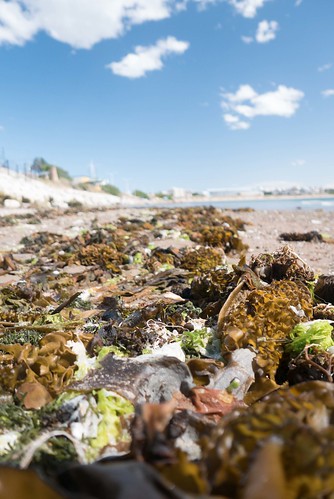 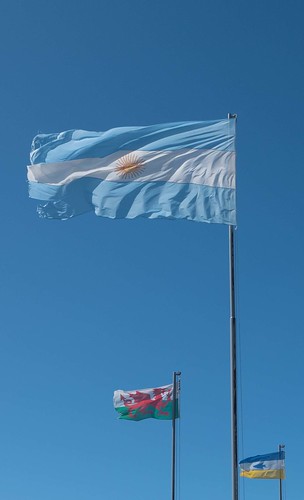 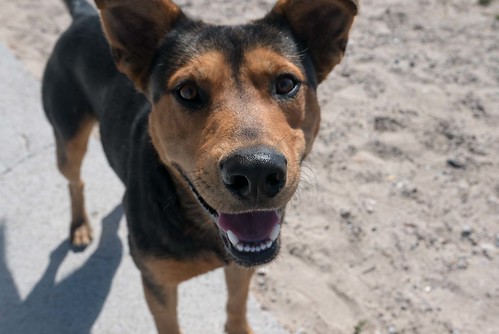 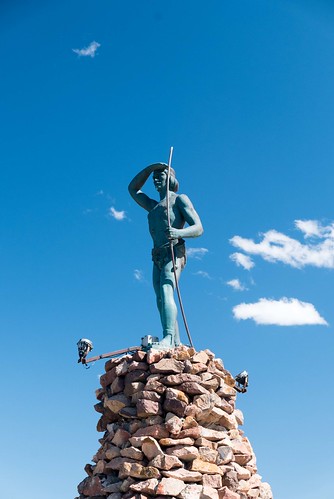 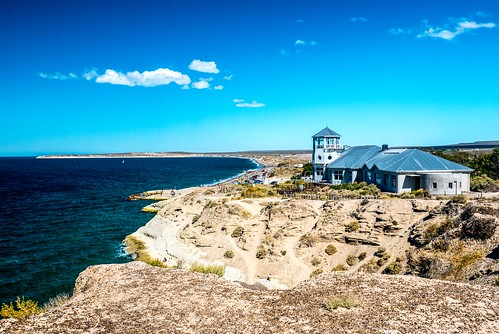 After getting onto the centre's Wi-Fi, we found that there was a bus which would take us back to town. Great news, until it turned up and we realised it took SUBE cards, which we hadn't topped up since leaving Buenos Aires as we hadn't realised anywhere else in the country uses them. Fortunately, the bus driver spotted our bemusement and that we were tourists and waved us on for free. Being a gringo does have its perks occasionally. Even better, it stopped outside our hostel so we grabbed our bags, failed miserably at finding an open empanada shop, bought some fruit from the supermarket, then went to the bus terminal. There was a bit of time left so I ran back to town and picked up some garlic and herb flatbread things and an ice cream to tide us over. Just as well, since the food on the Don Otto bus didn't get served until after 11pm. It was pasta with chicken and some other bits, far nicer than the yellow grub on the Salta bus. We watched a TV show then settled down to try and sleep as best we could. Despite firing off multiple couch surfing requests, we'd had no responses yet, and the bus had no Wi-Fi so we couldn't check if anyone had agreed to host us. It looked like we'd be spending the start of our first day in Bariloche looking for accommodation!
Posted by Rob Kershaw at 9:34 PM