As we said goodbye to Peter and Marit in the morning, they told us that they'd booked into the same hostel as us on the 23rd December in Buenos Aires. They would also be leaving on the 2nd January too, so we'd all get to celebrate Christmas and New Year together. Fantastic!

After that cheery news, our first few days in Argentina were ones we'd prefer to forget. When Tetris rang up the bus company, they had 20 spaces left for a bus to Salta that morning. Tossing up whether to buy the tickets through the hostel - at what we expected was an inflated price - we checked the weather, ruled out visiting the Itaipu Dam on account of an incoming storm (which it seems dissipated later with merely a splash of drizzle), and instead got on a bus to cross the border to our first stop in Argentina: Puerto Iguazú.

We'd booked a cheap hotel in the town and were planning on taking an overnight bus the following morning to Salta which would have taken an entire day and had us arrive on Monday 14th December. The crossing over the border was incredibly easy. We picked up a bus that said "Puerto Iguazu" from the stop over the road, hopped off at the crossing, got a stamp, brought in all of our bags unchecked because the guards clearly had no interest in searching through four meaty backpacks. We also brought over some snacks which were similarly ignored, including bananas. I'm pretty sure we've broken international law, but to be honest they aren't ripe yet and taste pretty grim so customs can come and collect them if they like. We then waited for another bus which took twenty minutes (the first bus doesn't hang around for everyone to get stamped over), jumped on, rode to the Argentina border, got stamped through and arrived in Puerto Iguazú about an hour after we set off. Argentina's time is an hour earlier than Brazil so we arrived well before lunch.

So far, so simple. However, things then deteriorated. We got to the bus station to find that the availability was now down to 4 seats. We had no pesos so decided to get to the Kerana Oga hostel and try and find out if they could book it for us. They spoke no English, and pointed us back in the direction of the terminal after first surprising us with a 21% VAT charge on our room rate which I'd missed in the booking.com receipt. One more thing to be aware of for this country, it seems.

We got back to the bus terminal to try and find someone who could change dollars; a tour operator told us that the taxi guys might be able to help, but the locals were wary of investing in dollars since a new president had been sworn in a day earlier who was planning on aligning dollars with a more sensible rate, so the best we could get was 12 pesos for $1. It was better than the official rate of 9.72 but far off the massive savings we were hoping for. Still, we may have better luck in Buenos Aires. We needed some luck, since between us checking in and then exchanging cash, three of the remaining seats to Salta had been sold. We were now stuck in Puerto Iguazú for at least another night. In despair, we booked the bus for the Monday, pushed our Salta accommodation back a day, then decided to go and get some food to cheer us up. The destination was Dona Maria because for some reason we thought that going to a hotel restaurant would be an excellent way to stem the flowing cash wound we'd inflicted on ourselves. We looked at the menu, tried to order something, failed to communicate completely, and ended up with half a river's worth of fish. Fortunately, it was delicious and the price, while more than a standard restaurant, wasn't bad for what we ate. Also, our new local beer was Quilmes. Not quite as good as Brahma, but not far off. 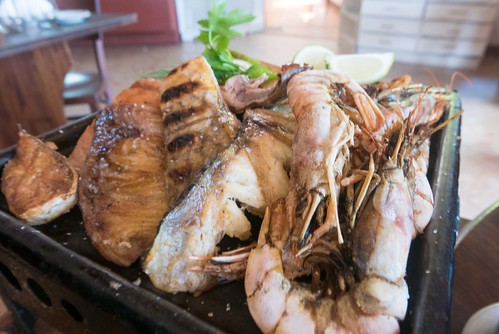 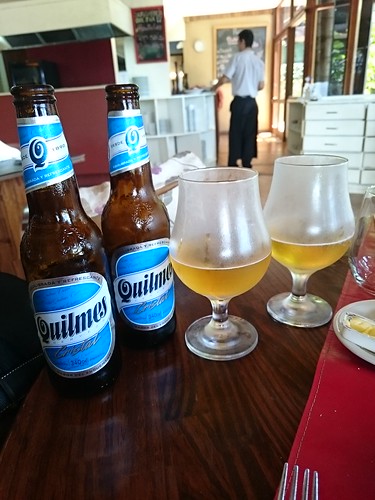 The rest of the day was spent catching up with planning and blogging. We fired off a Couchsurfing request on the off-chance that a local would be able to put us up for our extra day in the town and also give us some suggestions on places to visit while we were here, but booked another room elsewhere just in case.

The Couchsurfing turned out to be a bust, so we moved the next morning to Angiru Oga which was just around the corner. It was half the price of the other place, and whilst still not great, was more than adequate for our needs. We spotted a chap we saw in Tetris Container Hostel here too - Robert - who by a weird coincidence happened to be someone who had the same lecturer as Marit in the Netherlands. You can go halfway around the world and still run into an alumnus. The saying that it's a small world has never borne itself out more than when we are on the road. The first English person we met in Brazil was a fellow Salopian. Most people in England don't know where Shropshire is, yet you can't get away from us when we leave the country.

The weather deteriorated immediately, so we legged it back to the bus terminal and managed to track down the travel booth which I'd spotted online who bought dollars. They were offering 14 pesos to the dollar, confirming the fact that we'd been utterly ripped off yesterday. Thankfully we only changed $400 at the lower rate, so stocked up on three times that amount with this new generous exchange. Amazingly, they also bought the rest of our reais for an astounding rate too - it is almost worth running some sort of exchange train across the border to bring in reais. Almost. The amount of peso notes you get is crazy. I was feeling pretty gangster so set about spreading it on the bed, because why not. It's not like we had anything else to do. 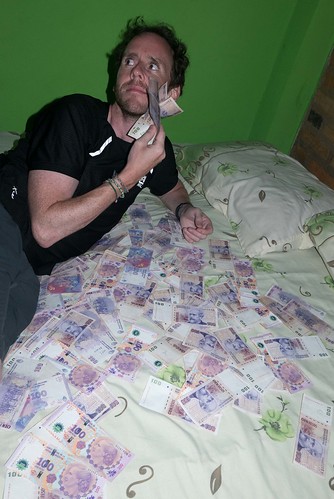 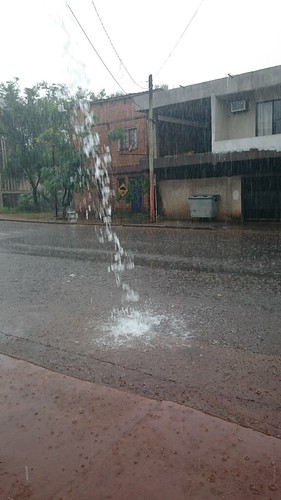 As the rain continued to pour, we decided to head to a cafe with Robert and exchanged life stories. He was a sociology professor and worked with governments around the world to understand and try and improve the sexual health education of poorer countries. He was a very expressive person; when I asked him how much of a difference he thought the work the organisations made, the range of emotions flashing across his face ran from sadness to concern to regret. He said that he had to learn to just do the best job he could, and once his reports were handed into the various governmental bodies, forget about them. He could spend a year working with a community, and he wouldn't know if his work would end up lost in a drawer after submitting it. It sounds like bureaucracy the world over.

The evening dried up so we walked over to Aqva, a restaurant I was very much looking forward to eating at in order to banish the Argentinian blues we'd experienced thus far. Unfortunately, this turned out to be a bust too. Not because the food was bad - quite the opposite. Four years ago I had a fundoplication in order to sort out an ongoing issue with indigestion. One side effect of this is that if I eat too quickly, my oesophagus gets clogged up meaning food can't get down to my stomach. Certain things exacerbate this - cold food, spicy food, salty food - but if I take it easy I can still eat anything. Unless I eat it quickly. The problem was that the food here was so good, that I wolfed a quarter of it down almost immediately. The consequences were not pleasant. Two hours later, I was still unable to finish my meal. I had to write the whole thing off. 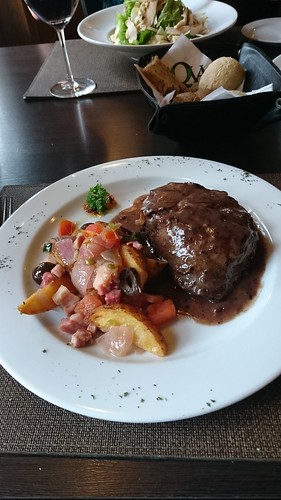 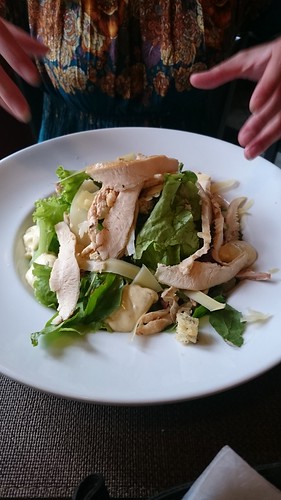 We weren't sorry to see the back of Puerto Iguazú. It's a border town, firmly aimed at tourists; a grotty, garish, soulless place and not at all what I expect the rest of Argentina to be like. To see something else though, we first needed to get the bus to Salta. Twenty-four hours on a bus doesn't sound like fun, and it is even less fun when you take the first six hour segment, get off the bus at Posadas, then realise the new bus which you'd expected to be fully reclining (and effectively turned your seat into a bed), actually only reclined about three-quarters of the way. Essentially your body is almost flat, but your legs are hanging over the edge. Fine for sitting, not great for sleeping. We'd thankfully gone to a local burger place in between the bus change, which was one of the best decisions we'd made as the food provided on the bus was pretty awful. They provided us with a snack of dry crackers with vanilla wafers, and then at 10pm we received a tray of yellow. Yellow chicken, yellow bread, yellow condensed milk...thank goodness for the accompanying free wine and whisky chaser which helped bring a little sleep. We probably managed six hours or so, which wasn't as bad as it could have been. 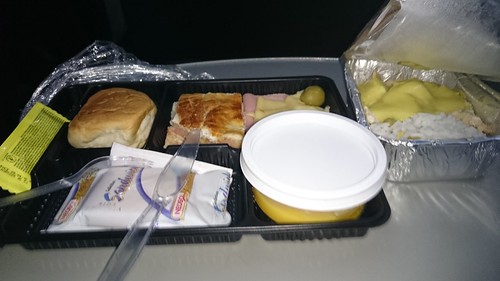 We pulled in at just before 10am, completing an pretty miserable three days in Argentina. I didn't take it to heart though; I didn't expect our experience to be indicative of the country, I was just looking forward to seeing something more in line with what we'd read and we were hoping Salta would live up to it.
Posted by Rob Kershaw at 8:18 PM