The plane journey to Foz do Iguaçu was uneventful and saved us a whole heap of time for a very reasonable price. Arriving in the heat of Foz, we decided to chance the local transport; a good move since there is basically only one road into town which the 120 bus frequently uses. For less than a quid we were at our new digs: Tetris Container Hostel. Aside from the obvious videogame reference,  the hostel is actually made out of shipping containers stacked on top of each other like Tetris blocks. It's certainly unique, and our double room with air-con was very comfortable. The weather was grey as usual, so we took a walk into town to see what was around. Towards the centre it seemed like there were a few Christmas choral performances planned (at least according to the placards dotted around), but the sky suddenly darkened and then rain started pouring so we scarpered into a nearby bar (Raffein) which just happened to be hosting happy hour. Or rather, happy four hours. After enjoying the Christmas decorations being put up by the staff, we got through a cocktail each followed by a massive jug of caipirinha and the rain showed no sign of abating, so in a slightly lighter downpour we rushed over to Sushi Hokkei for a mixed platter of hot and cold sushi. I don't know if the cocktails helped, but it tasted amazing. 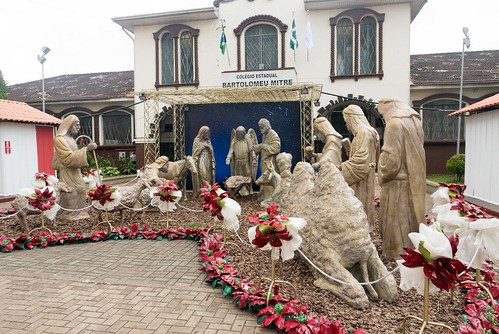 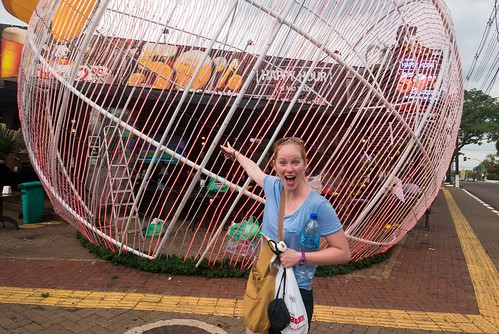 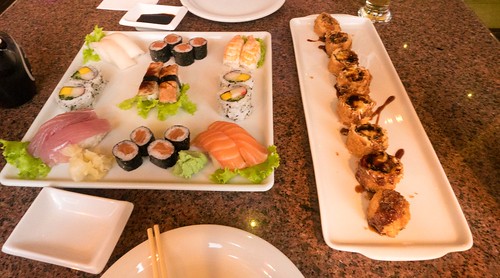 Incredibly, the rain only got worse. I thought Sao Paulo's storm was bad, but the torrents gushing from the heavens were something else - we had ended up in Jardim da Cerveja for a post-sushi beer, when the force of the water literally pushed out the light fitting. Water started pouring from the ceiling next to the still-lit light, making it the perfect photo opportunity for Gilly to audition for the new Timotei advert, or possibly get electrocuted. Happily, the latter didn't happen. 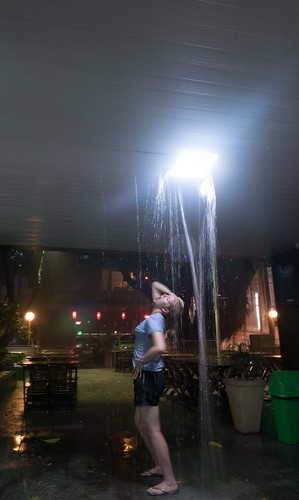 We met an American guy called Peter and a girl from Amsterdam called Marit in the hostel, and we all decided to head to the Brazilian side of the Iguaçu Falls the next day. They span the Argentina/Brazil border and from all accounts we'd heard that the Argentina side was better, but both sides offer different experiences, so we were keen to do both. It's easily reachable via the same bus that brought us from the airport (in fact, it goes to the airport first), and from there it's just a case of paying the entrance fee and enjoying the walk and the views.

The lead-in is gentle, allowing you to appreciate the falls from a distance. From there you travel along a single path which branches off to various viewpoints to fully appreciate the falls with different backdrops. Getting there early is recommended, as there are dozens of tour companies herding flocks of people into the park. We managed to miss the rush, and over three hundred photos later, we had seen and experienced more water than we thought was possible in one place. The noise is off the scale, and that's even before getting onto the ridiculous walkway which takes you into the full-on spray of the Devil's Throat falls. We got about three-quarters of the way in before the sheer intensity got too much. Even with admittedly rubbish waterproofs on, we were completely drenched. Fate smiled on us though, and blue sky eventually pushed through the cloud to dry us off. The heavy rains that the area had experienced over the previous weeks had washed a lot of debris and soil into the water, which is why they are a brownish colour. It's been over forty years since they ran clear, thanks to ongoing deforestation and climate change. 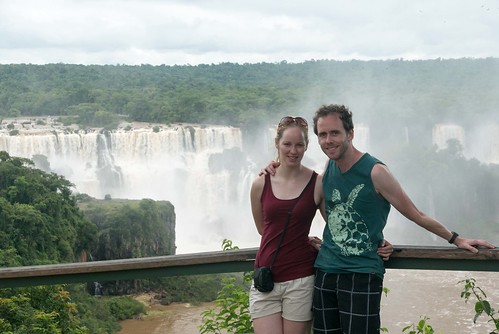 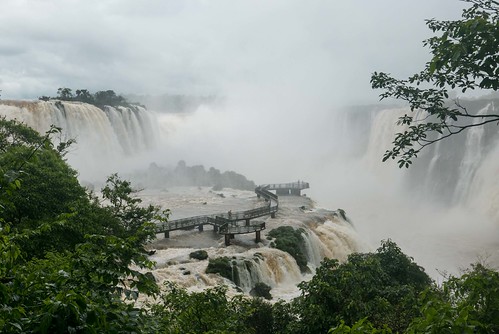 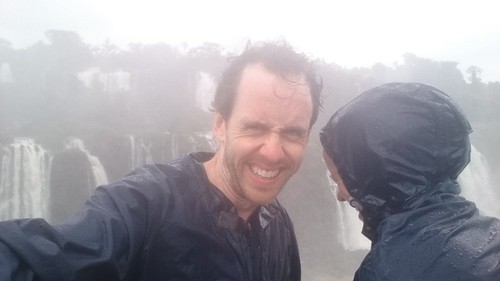 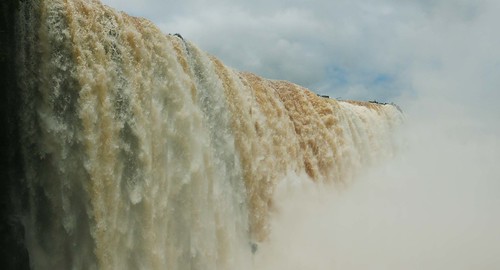 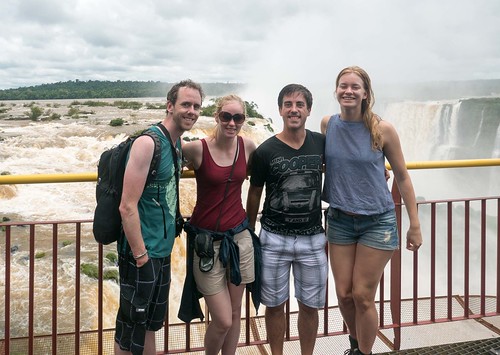 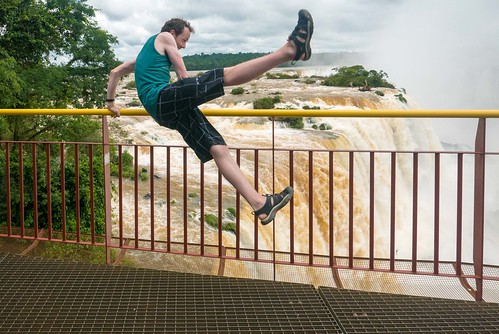 We brought some lunch with us, which we had to fiercely guard from the roaming coatis who had been known to bite tourists in an attempt to get their food. Don't be fooled by the cuteness - they're actually vermin. Cute, but rabies-riddled bitey vermin nonetheless, as the signage around the lunch area makes abundantly clear. 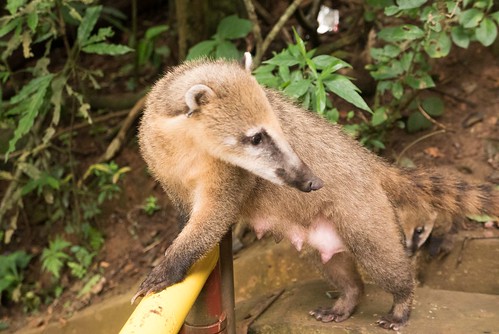 Were the falls worth visiting? Absolutely. I would be lying if I'd said I was blown away, but the grey skies may have had a part to play in that. If anything, I considered it a tasty aperitif to the main course in Argentina which we would soon be visiting.

Before that though, we had a bird park to visit. Parque das Aves is one of the best "zoos" I've ever been to, and I use that definition loosely. It's part conservation sanctuary, part rehabilitation centre - a little like the Billabong sanctuary in Australia. The birds are looked after and while penning them is never a substitute for free roaming, they have lots of room in their cages to fly about - especially in the macaw cage where visitors can wander around a huge enclosure with semi-tamed parrots flying all around you. The macaws have been given ropes with blocks of wood on which act as a kind of puzzle; they pull up the rope with their claws and then strip the wood and throw it onto the ground before proceeding to the next bit. When that gets boring, they play around with whatever else is in the vicinity - one of them had even learned how to undo a chain barrier, much to the bemusement of the park staff. 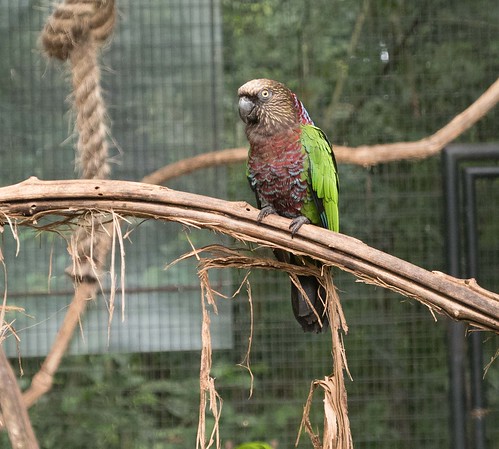 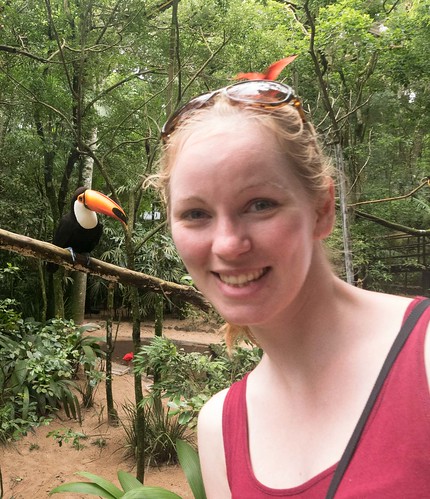 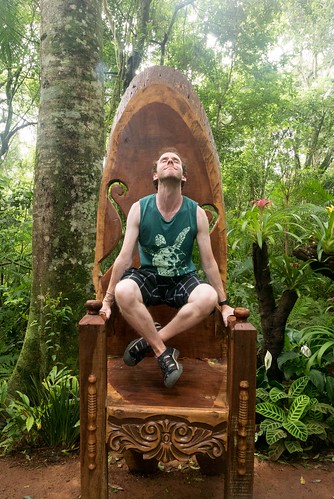 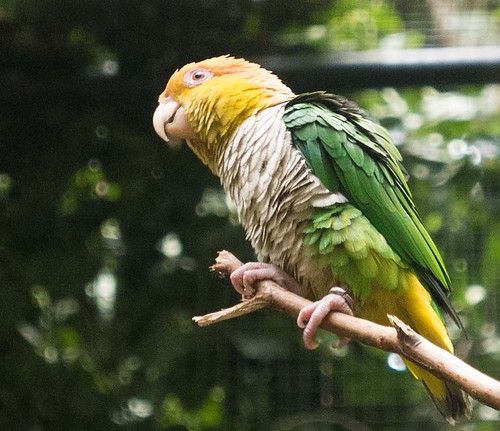 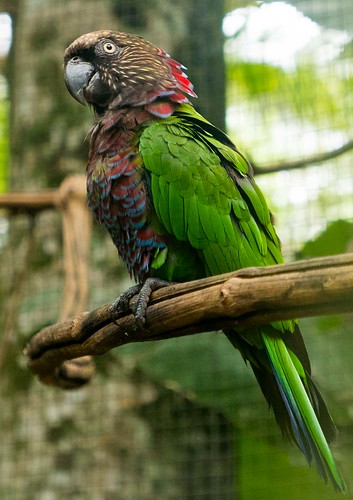 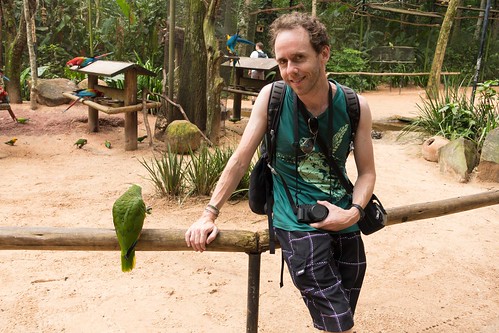 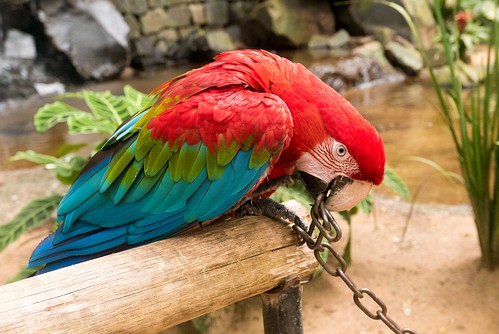 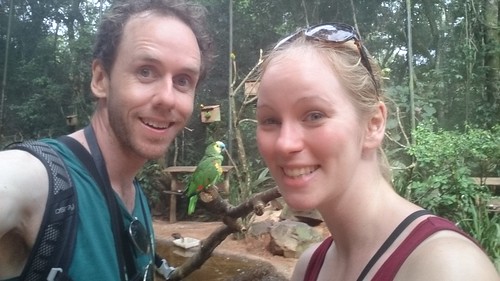 There is an incredible variety of birds here: cassowaries, flamingoes, hummingbirds, king vultures, and even a harpy eagle - the world's biggest eagle. Not to mention things you wouldn't expect to find in a bird park such as snakes, caimans, turtles, tarantulas and butterflies. I also got to see some African Grey parrots, super-smart birds which have been a favourite since reading Dick King-Smith's Harry's Mad as a kid. And of course toucans, possibly the most expressive and photogenic bird I've come across. Watching them toss peanuts into their mouths never fails to entertain. 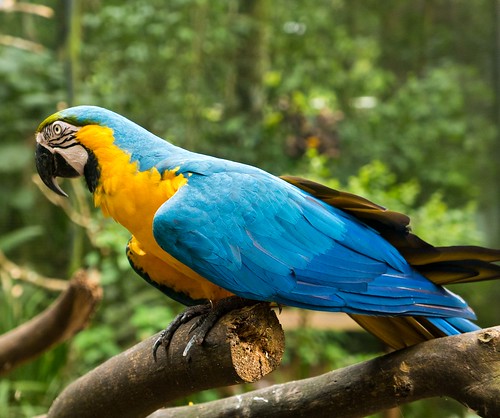 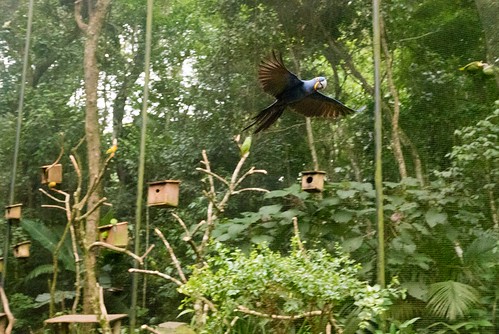 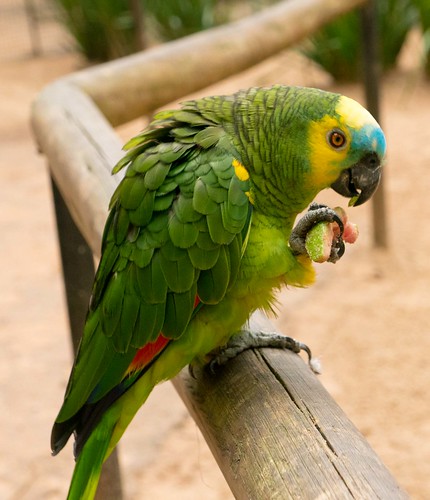 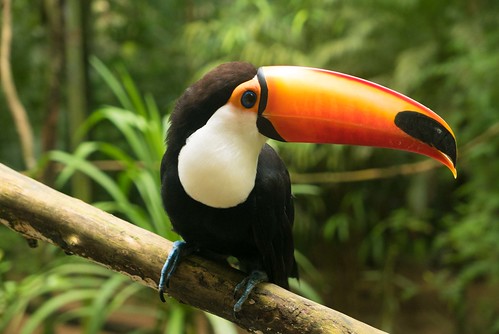 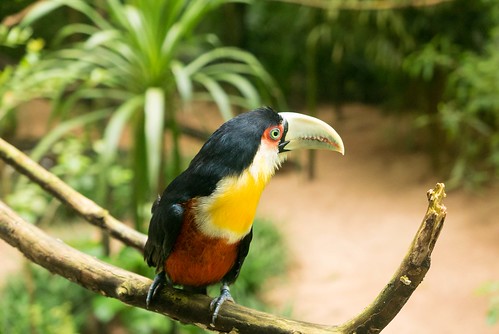 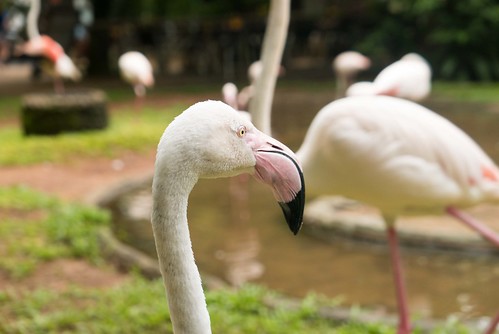 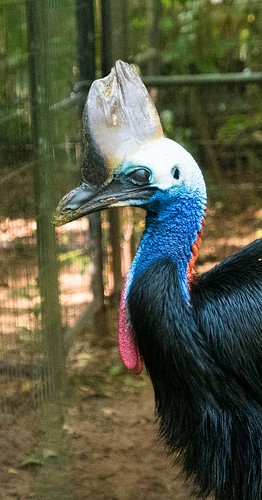 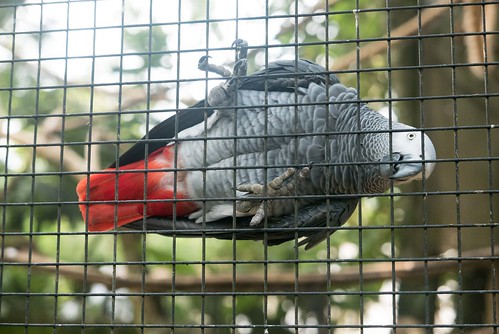 If you're stopping to take photos - which you will, constantly, since there's a new delight around every corner - then it'll take about three to four hours to get around the park. If you're going to the falls anyway, visiting is a no-brainer.

We ended the day on a recommendation from Peter - Emporio Com Arte - which was just around the corner, and served up some fruity caipirinhas and lovely local dishes in a kooky café-cum-art gallery. 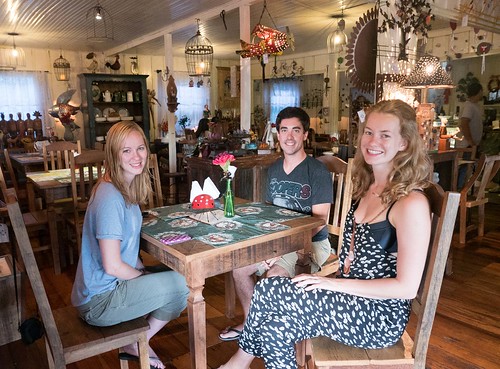 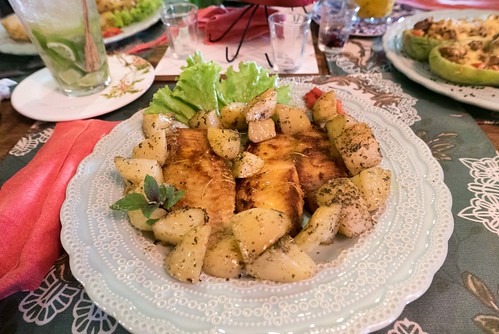 We had the other side of the falls to go to the next day, even though we hadn't actually planned it. Winging it on a daily basis is one of the many fun parts of travelling.
Posted by Rob Kershaw at 3:41 AM